On February 24, 2007, Falun Gong practitioners in New Zealand participated in the annual Carnival Parade in Wellington, the capital of New Zealand. They were well received by the spectators. It was the first time that Falun Gong practitioners participated in this parade, and it was also the debut appearance of the Falun Gong Divine Land Marching Band in Wellington. Nearly 100,000 people crowded along the roadside and witnessed the Dafa cultivators' demeanor. 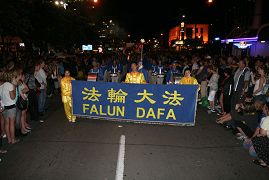 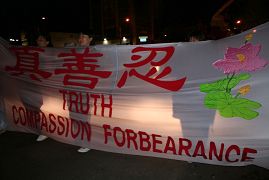 Practitioners participate for the first time in the Wellington Carnival Parade

On March 4, Falun Gong practitioners took part in another parade celebrating the Chinese New Year in Wellington. The Falun Gong contingent, composed of the Divine Land Marching Band, celestial maidens and a float, marched through the busy downtown. People were captivated by the vigorous marching band and were amazed at the beauty of the celestial maidens.

After the parade, Falun Gong practitioners distributed handmade paper lotuses and informational materials introducing Falun Dafa to the parade spectators. They also explained to the Chinese spectators the importance of quitting the Chinese Communist Party and its affiliated organizations.