(Minghui.org) Today's news from China includes incidents of persecution that took place in 6 cities or counties in 5 provinces, where at least 7 practitioners were recently persecuted for their belief. 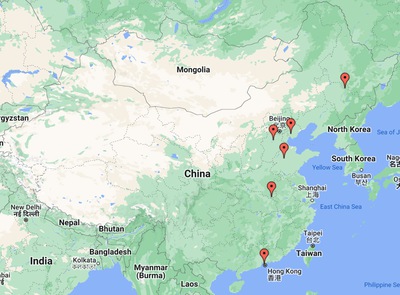 Ms. Liu Xia’s home was ransacked in May 2022 by officers including Zhao Mingya from the Shihe District Police Department because she wrote a letter to request her suspended salary be returned. She was then placed under six months of residential surveillance. When the term ended in November 2022, Zhao Mingya released Ms. Liu on bail pending trial.

Ms. Bai Meifen was arrested on February 4, 2016, and was sentenced to three years in prison by the Lubei District Court. She was released in 2019.

Sun Weizhong was arrested at home by officers from the Gaoqiao Police Station and people from the Baigou General Office, around 11 a.m. on January 8, 2023. These people ransacked Sun’s home and confiscated the photo of Falun Gong’s founder. Sun was taken to the police station but was released that afternoon.

Ms. Zhang Shuhua was detained but later released because of her health. She may face trial.

Ms. Luo Chunyin was arrested and detained in a brainwashing center for days in November 2021.

Ms. Liu Lijie was arrested by officers from the Ganggou Police Station near the Xingcun Overpass on November 1, 2023, for talking to people about Falun Gong. She was released that evening.

“Awakening All Beings Who Still Have Hope”