(Minghui.org) After Ms. Mo Liqiong was sentenced to 19 months with a 5,000-yuan fine for her faith in Falun Gong, the prosecutor complained that the sentence was too “light” and appealed with a higher court, which recently increased her term to 2.5 years with a 10,000-yuan fine. 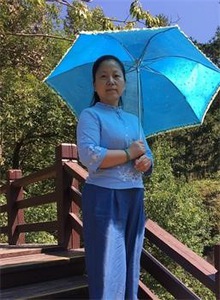 Ms. Mo, 52, a native of Xiangtan City, Hunan Province, works in Guangdong Province as a financial manager. She returned to her hometown in Xiangtan in early February 2021 to spend the Chinese New Year with her parents and son.

Ms. Mo ran into villager Li Qiang while she was walking on the street at around 8:30 p.m. on February 5, 2021. Knowing that Ms. Mo was a Falun Gong practitioner, Li reported her when he saw a Falun Gong booklet at his door upon returning home, thinking that it was Ms. Mo who placed it there.

Yang and Zhang Yong soon stopped Ms. Mo on the street and confiscated her Falun Gong book and a bag with several copies of Falun Gong booklets. The police also ransacked the place she was staying at in Xiangtan, but didn’t find any Falun Gong-related materials.

The police searched around the village and found three copies of Falun Gong booklets. Although no one saw Ms. Mo distributing the materials, the police still accused her of doing so and submitted her case to the Xiangtan County Procuratorate.

Ms. Mo’s mother, who is in her 80s, and other family members frequented the police station, procuratorate, and court to demand her release, but to no avail.

The Yuhu District Court held a virtual hearing of Ms. Mo’s case on June 28, 2022. Her two lawyers entered a not guilty plea for her. She also testified in her own defense.

Without informing her lawyers, presiding judge Zhang Zhan sentenced Ms. Mo to 19 months with a 5,000-yuan fine on July 27. The Yuhu District Procuratorate, however, blamed the court for giving her an overly light term and proceeded to file an appeal with the Xiangtan City Intermediate Court on August 4. They demanded that the higher court sentence her to three years or longer, accusing her of being a repeat offender, given her nine-year prison sentence in 2003 for practicing Falun Gong and the fact that she refused to plead guilty.

The Xiangtan City Intermediate Court held a hearing of Ms. Mo’s case on August 23. Her lawyers, Mr. Chen and Mr. Xie Yanyi, pointed out that the prosecutor failed to present any evidence showing how Ms. Mo “undermined law enforcement with a cult organization,” the standard pretext used to criminalize Falun Gong, and pointed out that even if she did distribute Falun Gong materials, she didn’t violate any laws by doing so.

The higher court announced on August 30 without informing Ms. Mo’s lawyers to increase her prison term by eleven months and court fine by 5,000 yuan.

After Nine Years of Imprisonment, Former Accountant Arrested for Her Faith Again

“My Understandings of Dafa Disciples’ Responsibilities”