(Minghui.org) Two Nanchang City, Jiangxi Province residents were recently confirmed to have been sentenced to prison for practicing Falun Gong, a spiritual discipline that has been persecuted by the Chinese communist regime since 1999.

Ms. Xu Guizhen, 71, was sentenced to three years and has been taken to the Jiangxi Province Women’s Prison. Another practitioner, Ms. Lu Linxiang, 59, was given one year and four months. As she has already served her term, she was released from the Nanchang City No. 1 Detention Center on June 8, 2022.

The two practitioners were arrested while studying Falun Gong’s teachings at a private residence on February 8, 2021, with five other practitioners.

Three of the seven practitioners, including Ms. Zhang Liyu, Ms. Zhang Xiaoyun and Mr. Zhao Zhongfa, were given 15 days of detention at the Nanchang City Lockup on February 10. The other four practitioners, including Ms. Xu, Ms. Lu, Ms. Lei Meirong and Ms. Liu Yonghong, were put on criminal detention and taken to the Xinjian County No. 1 Detention Center.

Ms. Liu and Ms. Lei were later sentenced to one year each and released on February 9, 2022.

Past Persecution of Ms. Xu Guizhen

Ms. Xu, a retired employee of the Jiangnan Material Factory, took up Falun Gong in January 1997. Her many ailments, including chronic gastroenteritis, heart disease, arthritis and frozen shoulder all soon disappeared.

Ms. Xu went to Beijing to appeal for Falun Gong in October 1999 and was arrested near the National Appeals Office. When she was interrogated at a police station, an officer said to her, “Don’t come to Beijing to appeal. You will end up being arrested. It’s useless. It’s Jiang Zemin (former head of the Chinese Communist Party) who wanted to have the persecution.”

Ms. Xu was held at the Xicheng District Detention Center, in a small room with over ten people. They shared one towel and a few blankets. No soap was given and very limited toilet paper was provided. Hard buns and soup with only a few vegetable leaves were the standard meal.

The police slapped Ms. Xu in the face twice while interrogating her. After being taken back to Nanchang, she was given 15 days at the Nanchang No. 1 Detention Center, on charges of “interrupting social order.” The detention was later extended to a month. Her workplace charged her 1,700 yuan to pay for the travel expense of those who went to Beijing to bring her back.

Ms. Xu returned to Beijing to appeal in December 1999 and was arrested on Tiananmen Square. The police interrogated her again. They also hung her up by the wrists and shocked her with electric batons. After a brief detention at the Shunyi Detention Center in Beijing, she was taken back to Nanchang and given another 15 days at the Nanchang No. 1 Detention Center for “interrupting social order.” The term was later extended to three months. When she returned home, she found that the police had ransacked her place and taken away all her Falun Gong books. 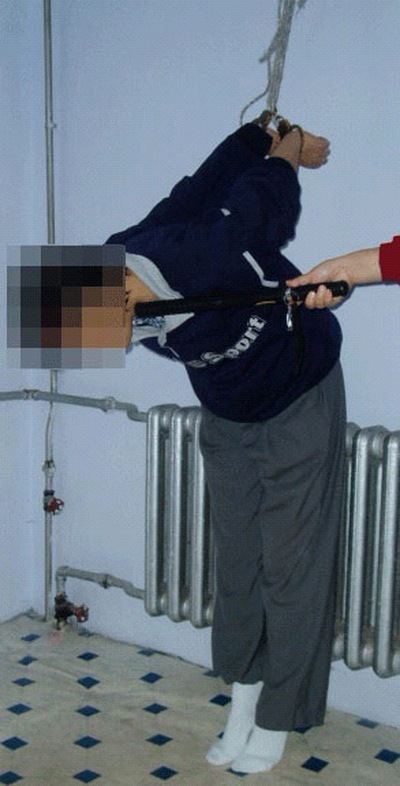 Torture reenactment: hung up and shocked with electric baton

Ms. Xu was arrested again on July 20, 2000, while doing the Falun Gong exercises on the playground in her neighborhood. She was given ten days at the Jiao District Detention Center, also for “interrupting social order.”

She went to Beijing for the third time to appeal in December 2000, was arrested and taken back to Nanchang. She was given three years at the Jiangxi Province Women’s Prison on December 22, on charges of “undermining law enforcement with a cult organization,” the standard pretext used to criminalize Falun Gong practitioners. As she was forced to renounce Falun Gong against her will at the labor camp, she was released on June 4, 2001 and allowed to serve the remaining term at home.

After being reported for distributing informational materials on August 13, 2003, Ms. Xu was arrested the fifth time and held at the Nanchang County Detention Center, where the police forcibly collected her fingerprints and took her photo. Her Falun Gong books were confiscated.

On September 12, 2003, the police gave Ms. Xu one year at the Jiangxi Women’s Forced Labor Camp, on charges of “undermining law enforcement with a cult organization.” After she was denied admission due to her physical condition, the police and the 610 Office in her factory ordered Ms. Xu to report to the residential committee every day. She would be fined 10 yuan each day if she didn’t comply. She also had to get permission if she had to travel out of town.

As Ms. Xu refused to comply with the police, the police made another attempt to take her to the labor camp, only to be refused again. The police were infuriated and verbally abused her.

Ms. Xu’s next arrest was on January 23, 2005, after being reported for talking to people about Falun Gong. After spending one night at the Liantang Police Station, she was taken to the Nanchang County Detention Center and held there for a month. As she held a hunger strike to protest the persecution, she was force-fed. The guards ordered the inmates to pinch her nose and pry open her mouth with a screwdriver. In the coldest time in the winter, the guards force-fed her water, which spilled and soaked her clothes.

In retaliation against Ms. Xu’s continued hunger strike, the guards chained her hands to her feet for five days. She had to bend over while walking and sleeping. 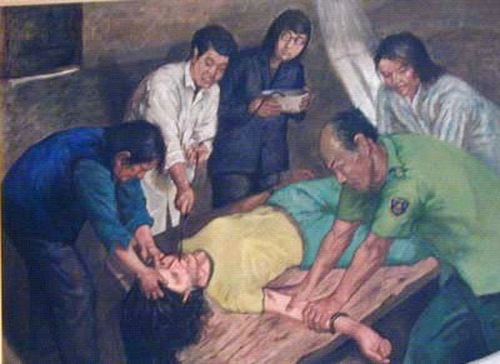 Past Persecution of Ms. Lu Linxiang

Ms. Lu took up Falun Gong in August 1998. In less than a month, her heart and stomach conditions were cured.

Ms. Lu was arrested on October 18, 2008, for distributing informational materials about Falun Gong at a wholesale market. The police attempted to extort 6,000 yuan from her. As she refused to pay, they took her to the police station for interrogation. They deceived Ms. Lu into signing the deposition, saying that she would be released afterwards, only to take her to the Nanchang City No. 1 Detention Center after she signed it.

The Qingyunpu Domestic Security Office later gave Ms. Lu 1.5 years at the Jiangxi Province Women’s Forced Labor Camp. As soon as she was taken there, the guards ordered her to renounce Falun Gong. She was subjected to constant brainwashing and forced to read books smearing Falun Gong. When she still held fast to her faith, the guards found her family and friends, and forced them to try to persuade her.

In addition to the brainwashing, Ms. Lu was also forced to work 15 hours a day without pay, making paper boxes and gloves, trimming thread and stringing beads.

After she was released, the 610 Office threatened Ms. Lu’s husband with job termination and ordered their son to monitor her and prevent her from practicing Falun Gong or going out.

“Getting Rid of Human Notions and Walking Towards Godhood”