(Minghui.org) Last year, a speech given at the Hong Kong Press Club by then U.S. Ambassador-at-Large for International Religious Freedom Samuel D. Brownback as well as his message on Twitter inspired Falun Dafa practitioners in Puerto Rico to share his forthright words with the public so as to further raise awareness about thepersecution of Falun Gong in China.

The practitioners made a banner with his declaration to the Chinese Communist Party, “You will not win your war on faith,” and displayed it prominently at their public presentations.

They also prepared a petition in both English and Spanish, directed to the ambassador. People eagerly signed it after reading about the persecution and the ambassador’s words.

[Note: This exchange of letters between Falun Dafa practitioners and Ambassador Brownback took place in early 2020, during the Trump administration.]

We sent the Honorable Ambassador the following letter accompanied by the signed petitions:

We are practitioners of Falun Dafa (also known as Falun Gong) in San Juan Puerto Rico.

Your ‘Remarks on Religious Freedom’ at the Foreign Correspondent’s Club in Hong Kong on March 8, 2019, has inspired us with its candor and sincerity. Many people of faith in Puerto Rico share your “lament” and wish to endorse your forthright declaration on behalf of believers.

We participate in various community events to introduce Falun Dafa to the public and raise awareness about its persecution, and the persecution of other faiths, in China. Adults and children from all walks of life, and of various faiths, are shocked and incredulous when they read that the atrocities perpetrated by the Chinese Communist Party continue to take place in this day and age. We have seen people cry as they read our exhibition posters. Old ladies have braved the rain to reach our table and sign a petition condemning these atrocities. Children have hauled their parents to our booth hoping they could explain the heartbreaking sadness in posters of children orphaned because their parents practiced Falun Dafa. One visitor, as he signed a petition, was so outraged that he called out “May you get so many signatures that the world runs out of paper!”

We have made a banner with your declaration to the Chinese communist regime on Twitter, “you will not win your war on faith”, and it has served as a focus for our exhibitions - awakening people to an atrocious reality and also making many appreciate the blessing of being part of a country that honors religious liberty. We felt that you would be sympathetic to a petition that both endorsed your stance and also urged you to continue your good work. In just three events, the public has responded enthusiastically, and we humbly offer you our petitions.

It is very possible that Falun Dafa practitioners from other parts of the USA, and even from other countries, will also send you similar petitions.

Honorable ambassador, please consider speaking to key people in the US corporate community and making the current reality of China’s crimes against humanity clearer to corporations that trade with China. People who have read our exhibits have asked “Why do we trade with China?” and have commented on how many consumer goods now say ‘Made in China’. Such people, wishing to do all they can to decisively stop China’s crimes against humanity, raise a valid concern in their struggle to find the proper relationship, both for themselves and for their country, to a nation that is strategically eliminating religious belief in a most deplorable way.

The stance of the US on religious liberty is in polar opposition to the atrocities that continue to be perpetrated in China. Wouldn’t this resolute stance be even more solid if US corporations opted to avoid trade with countries designated as Countries of Particular Concern by the US, and especially those that have been so designated for some 20 years?

There is something of a sinister travesty in buying a Christmas tree ‘Made in China’ and later discovering that it was made by people tortured for their religious beliefs in a forced-labor camp.

To those who are currently illegally arrested, tortured, brainwashed, or waiting for their already-sold vital organs to be surgically removed – all for believing in the divine – your words and stance are not only encouraging but also a key part of the global wave that will surely eliminate such heinous iniquity soon. Master Li Hongzhi, the founder of Falun Dafa, has said, “Never in history has someone who persecuted those with upright faiths ever succeeded.”

Thank you, and be assured that you speak for many who stand firmly by you.

The Honorable Ambassador accepted our petition sheets with the following gracious reply: 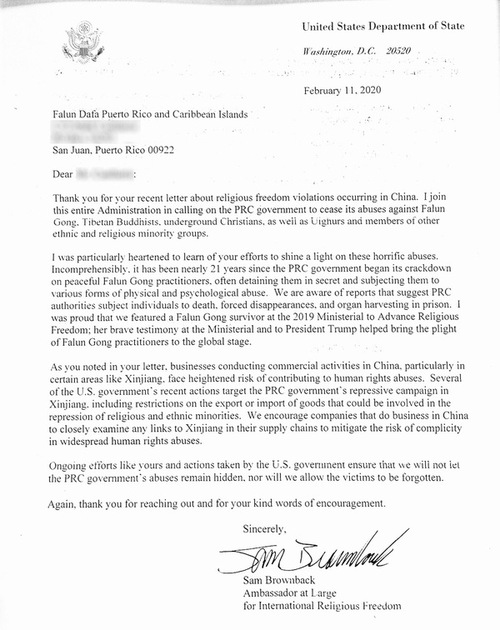 Thank you for your recent letter about religious freedom violations occurring in China. I join this entire Administration in calling on the PRC government to cease its abuses against Falun Gong, Tibetan Buddhists, underground Christians. as well as Uighurs and members of other ethnic and religious minority groups.

I was particularly heartened to learn of your efforts to shine a light on these horrific abuses. Incomprehensibly, it has been nearly 21 years since the PRC government began its crackdown on peaceful Falun Gong practitioners, often detaining them in secret and subjecting them to various forms of physical and psychological abuse. We are aware of reports that suggest PRC authorities subject individuals to death, forced disappearances, and organ harvesting in prison. I was proud that we featured a Falun Gong survivor at the 2019 Ministerial to Advance Religious Freedom; her brave testimony at the Ministerial and to President Trump helped bring the plight of Falun Gong practitioners to the global stage.

As you noted in your letter, businesses conducting commercial activities in China, particularly in certain areas like Xinjiang, face a heightened risk of contributing to human rights abuses. Several of the U.S. government’s recent actions target the PRC government's repressive campaign in Xinjiang, including restrictions on the export or import of goods that could be involved in the repression of religious and ethnic minorities. We encourage companies that do business in China to closely examine any links to Xinjiang in their supply chains to mitigate the risk of complicity in widespread human rights abuses.

Ongoing efforts like yours and actions taken by the U.S. government ensure that we will not let the PRC government’s abuses remain hidden, nor will we allow the victims to be forgotten.

Again, thank you for reaching out and for your kind words of encouragement.

Below is a copy of the petition, for reference. 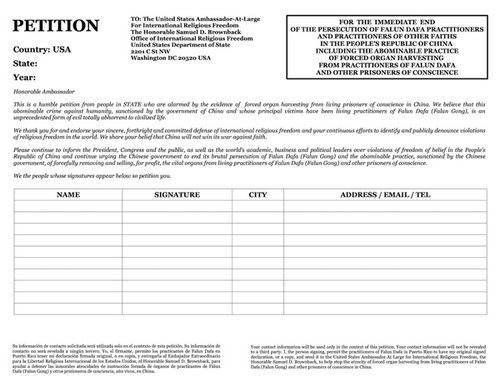