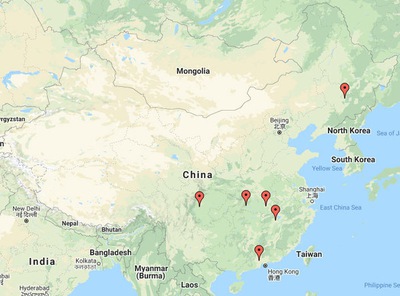 Some law officials came to Ms. Dong Liping’s home in Lishu Village, Xiyang Town on the morning of January 5, 2021. Ms. Dong was not at home but Ms. Hao Shuping was reading the Fa there. They took away Ms. Hao and ransacked both practitioners’ homes. Ms. Hao was released that evening.

Ms. Dong Liping has been harassed constantly since then. Officers from the Xiyang Town Police Station came to Ms. Dong’s home around 7 p.m. on February 10, 2021, and attempted to take Ms. Dong away. Ms. Dong refused to let them into the yard. The stalemate went on for a long time before those people left.

The practitioners were forced to take a nucleic acid test in the following three days. It is unknown where they are detained at present.

Two brainwashing centers were set up during the “Zero-out” campaign in Wujiagang and Xiaoxita, Yichang City.

Ms. Yang Chengyun from Gezhouba District was taken to the Wujiagang Brainwashing Center at the end of December 2020. Every day, she was surrounded by twelve “helpers” who tried to brainwash her. Ms. Yang was persecuted there for more than a month. She was released on February 2, 2021.

Mr. Xie Xishen was arrested downstairs at the building where he lives by five officers from the Dongshan Police Station on December 30, 2020. He was taken to a brainwashing center but was released on the afternoon of December 31, 2020, due to his high blood pressure.

Ms. Fan Shujun, 78, was reported to police on the morning of February 8, 2021for distributing truth-clarifying materials near Shuanghua Bridge. She was taken to the Huayang Police Station.

Ms. Fan refused to tell the police her information but they found it via facial identification. Her home was then ransacked. They took away several Dafa books, and more than 20 copies of truth-clarifying materials, over 100 yuan in bills with truth-clarifying words. Ms. Fan was released around 9 p.m., that same day.

The next day, Ms. Fan went to the police station to try to get back the items they took from her home but she was told that they were all confiscated.

Ms. Zheng Wangying, 61, was arrested at home by eight officers from the Wuhan Domestic Security Division on January 26, 2021. Her family members tried to prevent the officers from taking her and were warned that they would be fined 4,000 yuan for obstructing official duty. The details are unknown.

“Having Lost One Son to the Persecution of Falun Gong, Elderly Father Calls for Another Son’s Release”