(Minghui.org) Today's news from China includes incidents of persecution that took place in 15 cities or counties in 9 provinces, where at least 36 practitioners were recently persecuted for their belief. 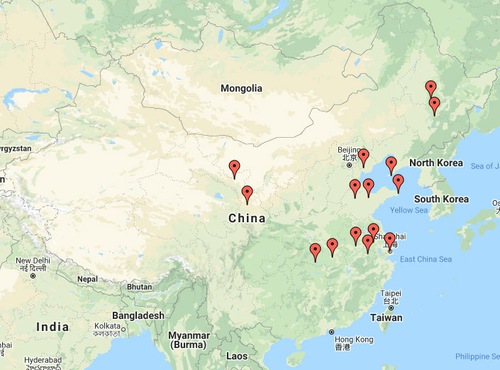 Ms. Jiang Zhaoying and Ms. Liu Tifei were tried in the Shushuan District Court on the morning of October 28, 2021. Ms. Jiang Zaoying attended the hearing via online video.

Ms. Jiang and Ms. Liu were arrested on January 21, 2021. Ms. Liu was placed under residential surveillance but Ms. Jiang is still detained.

Mr. Dai Hong, in his 60s, is retired from an insurance company in Gong’an County. Because he was harassed recently and firmly refused to sign the three statements his wife, who opposed his practicing Falun Gong, drove him out of his home on October 12, 2021. Mr. Dai had to stay in an old apartment at his former workplace.

When Mr. Dai returned to the apartment on the afternoon of October 25, he saw that it had been broken into. The lock on the metal door was destroyed. Mr. Dai noticed that two copies of Zhuan Falun, three other Falun Gong books, a photo of Falun Gong’s founder, and his MP4 media player with the Falun Gong exercise music were gone.

Later that day, seven police officers including Chen Yang, head of local police station, showed up. They searched Mr. Dai and confiscated a bank card and 4400 yuan in cash. They threatened him and said by the end of the month, if he still refused to sign the three statements, his retirement benfits would be withheld and his household registration and his ID card would be canceled.

Two officers knocked on Ms. Wang Ying’s door on the morning of October 23. When her husband opened it, he saw the two officers taking photos of the door. After the officers learned that Ms. Wang was not at home, they left.

The same two officers also went to Ms. Wang Yaqin’s home the same day. They warned the family not to hang anything related Falun Gong on the wall because their supervisors or other higher authorities would come to check on it.

Ms. Wang Suzhen from the Caofeidian District was arrested around 10 a.m. on October 25 for talking to people about Falun Gong in Bogezhuang Town Market in Luannan County. She was taken to the police station. Her children quickly showed up. Ms. Wang was released around 6 p.m. that evening.

Ms. Huang Lina lives in Xilongjia Village, Yatou Town. She was reported to the police for talking to people about Falun Gong and was arrested by Qingyutan Police Station officers on September 25. Her home was ransacked. Her personal belongings were confiscated, including several Falun Gong books, a laptop, a photo of Falun Gong’s founder, an electric bike, and a backpack with 1400 yuan in cash, a health code, and a senior bus card.

The secretary of the village Party committee pressured the practitioners in the village to sign the three statements. If they don’t, he threatened that all their benefits would be canceled.

Ms. Xu Liru, 75, was arrested at the end of May 2021. Her home was ransacked. She was taken to the Ganjing Procuratorate by the police at the end of July and was pressured to sign a document, which she refused to do. After that, she was called to the procuratorate every two weeks, until she decided to leave home. Her son was deceived and forced his mother to continue going to the procuratorate. Ms. Xu was arrested at home on the morning of October 27, 2021. It is not known where she is detained.

Ms. Li Shujuan from the Caofeidian District was arrested for talking to people about Falun Gong in a market on the morning of October 15, 2021. She is being held in a detention house for a term of 15 days.

Ms. Zhang Li, 67; Ms. Cheng Xizhen, 65; and Ms. Zhang, 65, were recorded by a surveillance camera when they talked to people about Falun Gong in a farmer’s market on October 25, 2021. They were identified by the Internet police and were arrested by officers from the Nanhu Police Station in the Wuchang District and the Shizishan Police Station in the Hongshan District on October 26. They were interrogated and taken to the No.1 Detention House on the morning of October 27. They were placed under 10-day administrative detention.

More than 20 police officers went to Ms. Li Chunzhi’s home around 3 p.m. on October 17, 2021. They jumped over the courtyard wall and broke into her house. Five elderly practitioners who were reading Zhuan Falun were arrested. All of their homes were ransacked. Five or six more practitioners were arrested at home. The practitioners were taken to different police stations for interrogation. All but three of them were released that day.

Four officers from the Changzheng Police Station in the Putuo District went to the home of Mr. Zhang Yinquan and his wife Ms. Jin Huizhen in the Putuo District on the afternoon of October 26, 2021. They wanted to take the couple to the police station to get samples of their blood. The couple refused to open the door. The situation lasted a few hours. The police seized Mr. Zhang but Ms. Jin managed to escape.

Ms. Zhao Aihua was harassed at home by village officials and community staff members in Qiaoguan Town on August 2, 2021. They attempted to take Ms. Zhao to a brainwashing center, but she refused to cooperate. The next day, several people went to Ms. Zhao’s home again, but no one was at home.

These people then went to Ms. Wang Yuqin’s home and took her to the brainwashing center near the Jingshan Reservoir. They forced Ms. Wang to sign the guarantee statement before letting her go.

They also took Mr. Gao Yuxiang to the brainwashing center. Mr. Gao clarified the truth to them and returned home that same day.

Mr. Wang Shukun, Mr. Wang’s brother and Ms. Xu Jing were detained in the brainwashing center in Ningyuanbao Town, Jinchuan District. At the time of this report they had been there for six days.

Mr. Yang Jianwei was harassed several times. His home was ransacked around midnight in May 2021. Five officers went to his home on Mid-Autumn Day, September 21, 2021 to ask for Mr. Yang’s whereabouts.

Ms. Yan Jing was sentenced to three years in prison recently. During a routine physical exam she was diagnosed with advanced breast cancer. The court has now asked the hospital for the medical report.

Mr. Chu Tongchun from Fujia Village was detained for 13 days. He has now returned home.

Ms. Jin Yijun was arrested at home on the morning of September 24, 2021. Her home was ransacked. Her personal belongings, including a printer, a calendar, seven currency bills with facts about Falun Gong printed on them, numerous CDs, and a media player, were confiscated.

Ms. Jin was placed under 10 days of detention and was first held in a detention house in the Qilihe District. She was transferred to the No.1 Detention Center of Lanzhou City on the seventh day. Her family received an official criminal detention notice on October 2, 2021, after she was taken to the detention center.

Ms. Wang Meihong, 64, from Mudanjiang City was taken to Heilongjiang Province Women’s Prison in mid-May 2021. She has now been there for over five months, but no notice of imprisonment has ever been issued. Neither her family nor her lawyer are allowed to visit her or call her.

Mr. Wang Hongtao purchased a high-speed rail ticket for a business trip on the evening of October 11, 2021. The next day, Zhiyuan Police Station officers in the Lixia District went to his home to get Mr. Wang’s phone number and where he worked, but they were unsuccessful.

They went to the railway station on the morning of October 13 to intercept Mr. Wang. They videotaped and searched him. His colleague who was accompanying him on the trip was also questioned. Mr. Wang was told to go to the police station when he returned home. The officers also went to his workplace that morning to make trouble for him.

Ms. Liu Lijie was arrested again by Lashan Police Station officers on the morning of October 27, 2021.

The same police officers had arrested her in April 2020 but did not detain her at that time because of the pandemic. They then tried to detain her in November 2020 and again in July 2021 but were not able to because of her health.

“Jilin Woman Secretly Sentenced to Six Years for Her Faith”