(Minghui.org) The annual Pacific Pines Springfest was held in the city of Gold Coast in Queensland on November 14, 2021. Local Falun Gong practitioners participated in this popular event, and the host invited them to introduce the practice and demonstrate the peaceful exercises on stage. Mark Boothman, a state member of parliament, praised Falun Gong. He said that the practice plays an important role in the community and that its principles of Truthfulness, Compassion, Forbearance were the universal values of mankind and principles that everyone should follow.

Practitioners were invited to demonstrate the five sets of peaceful exercises. 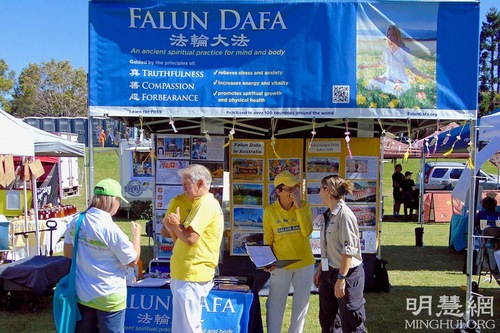 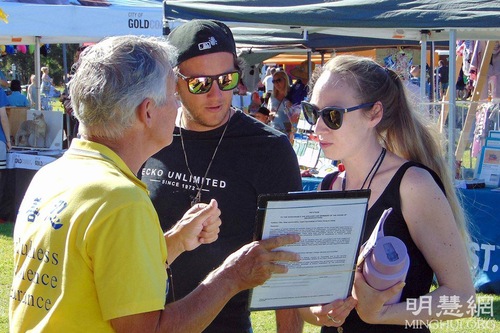 Practitioners introduced Falun Gong to the public and explained the facts about the persecution. Many people signed the petition to demand its immediate end. 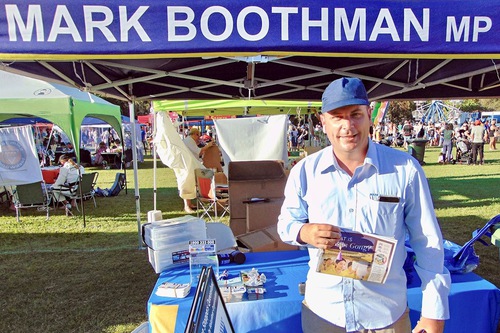 Mark Boothman, Liberal National Party Queensland State Member of Parliament for Theodore, said that the Chinese regime should not persecute Truthfulness, Compassion, Forbearance. He said, “It is important that people treat each other with kindness, as we all live on a small planet. We should try to get along with mutual respect. In Australia, people believe in human rights and everyone should be treated with dignity. Everyone is allowed to have his personal views and shouldn’t be persecuted because of his faith and what he believes.” He told practitioners that Australia has always supported people’s civil rights.

Mr. Boothman said that Australia is a free country and people have the right to live their lives and speak their minds as long as they don’t hurt others. He stated, “If everyone could follow the principles of Truthfulness, Compassion, Forbearance, there would be no need for crime stoppers. If everyone does the right thing, people won’t need the police.

He said that he had already signed the petition demanding that it end.

Environment Minister and State Member of Parliament: Falun Gong is Important to the Community 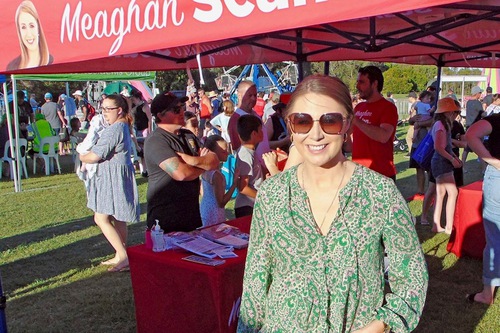 Meaghan Scanlon, Queensland Environment Minister and Labor Party Queensland State Member of Parliament for Gaven, came to the practitioners’ table to talk with them. She was glad to see so many different community groups gathered again after a difficult year of Covid 19, and that the practitioners remained persistent in telling people about the persecution in China. She said, “Falun Gong is important to the community. In this challenging year, the principles of Truthfulness, Compassion, Forbearance are the universal values people should follow.”

Ms. Scanlon told practitioners that the state of Queensland worked hard to communicate with its citizens and ensure that their health and local economy are protected. She then told the practitioners that she will continue to support their efforts to end the persecution.

We Need to Boycott the CCP 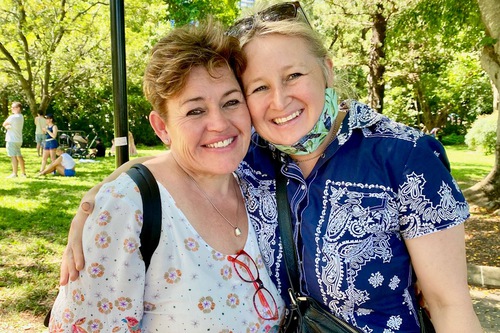 Two women hugged the practitioner who was collecting signatures, and said, “Thank you, well done.” Bev said, “People need to see the Chinese Communist Party (CCP) for what it is and understand how evil it is. It divides people and creates conflicts between them. We must come out and boycott it,” she said.

Heidi also expressed her views on the CCP, and said, “The CCP is a dictatorship and controls every aspect of people’s lives. People may think that they are free under its reign, but the CCP has a tight grip over them as it runs an evil system.”

A man in his 70s said that he knew that the CCP was dangerous a long time ago, “But now its life has come to an end and it will be finished soon,” he added.