Both Mr. Ren and Ms. Sun, residents of Dalian City, Liaoning Province, were arrested on June 26, 2020 by officers of the Ganjingzi Police Station and Domestic Security Office. The police confiscated 500,000 yuan in cash and computer supplies worth more than 200,000 yuan from Mr. Ren’s apartment. They also located his car and confiscated 50,000 yuan in cash found in the vehicle.

While Ms. Sun was released on the next day due to poor health, Mr. Ren, 46, was hospitalized for 19 days, after he suffered heart and kidney failure due to savage beatings by the police. 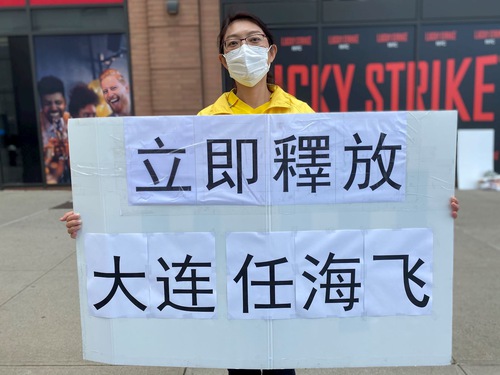 Ms. Wang Jing protesting for the release of her husband

On July 1, 2020, Mr. Ren’s wife, Ms. Wang Jing, also a Falun Gong practitioner who is currently living in the U.S., protested in front of the Chinese consulate in New York and demanded her husband's release immediately.

Mr. Ren was later transferred to the Yaojia Detention Center. The once healthy man developed severe diabetes and was forced to take unknown medicine. When his lawyer was finally allowed to visit him after being turned away initially, the lawyer noticed that he was emaciated and haggard.

The court held two joint hearings of the two practitioners’ cases, on September 8 and 23, respectively. Their lawyers entered not guilty pleas for them. Ms. Sun maintained that she didn’t do anything wrong in practicing Falun Gong and trying to be a good person.

The judge convicted the two practitioners on October 14. They are now appealing the sentences.

Prior to his latest term, Mr. Ren was sentenced to 7.5 years in 2001 for talking to people about Falun Gong. He was severely tortured at Huazi Prison in Liaoyang and then at Dalian Prison. By the time he was released in September 2008, Mr. Ren, then 33, had become so weak and emaciated that his family almost couldn’t recognize him. Yet he had to stay away from home to avoid further harassment.

“Informing the Police about Examples of Karmic Retribution Can Restrain Them”