When the practitioner suggested going to the first principal’s school after the two others that were farther away, the first principal insisted that her school be first. She made sure that each and every one of her students would attend the Falun Dafa session.

The principal kept marveling at how the meeting with the other two principals came together so speedily with barely any notice. “How is it possible, how is it possible, what a miracle …,” she said. She was also deeply impressed and pointed out admiringly that the practitioner was traveling by herself to an unknown place and spending her own money to hold these sessions.

In this way, the first Falun Dafa instructional session at a school in Manipur was held in July 2018 that very afternoon, attended by the residential children—all girls—as well as several sisters (catholic nuns). 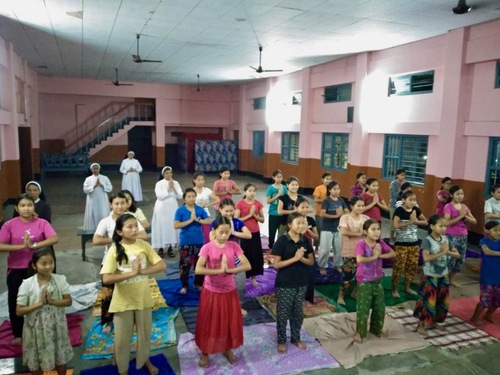 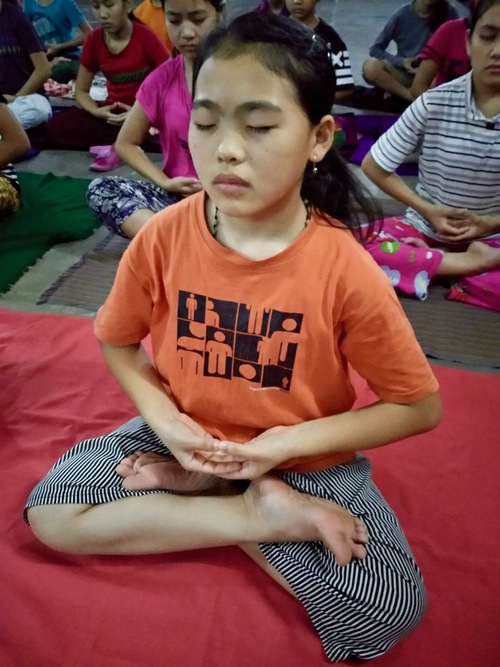 One of the residential girls at the first school does the 5th exercise.

The practitioner always calls the first Falun Dafa session in a new area “historic,” as she believes that in the future the event will surely go down in history, and if not, it will still be forever recorded in the cosmos like a film.

She spent the entire next day holding several Falun Dafa sessions, and according to the principal’s wish, every single student attended. The principal herself attended every session despite her busy schedule, as she felt that her presence would help. It did indeed help, especially when she stressed the importance of Truthfulness, Compassion and Tolerance, having character and values, and being a good human being. Before each session, she gave an introduction of the practitioner and at the end called for many thanks. 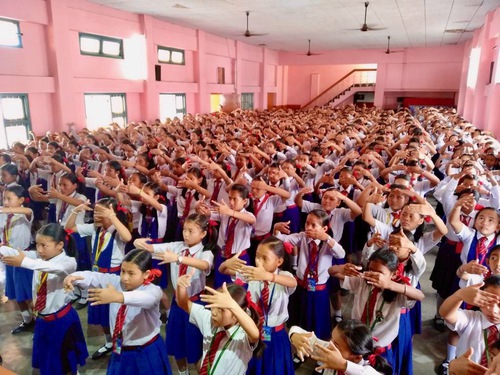 Girls at the first school do the second exercise. 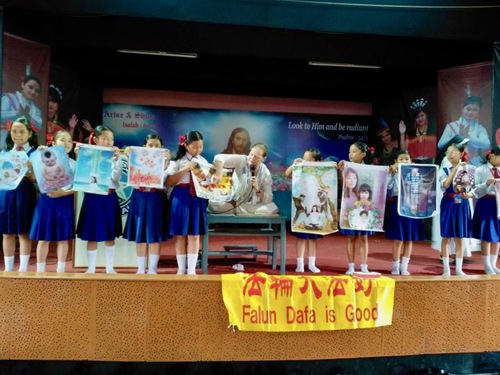 Ten little girls hold up various posters while the practitioner explains the posters one by one. 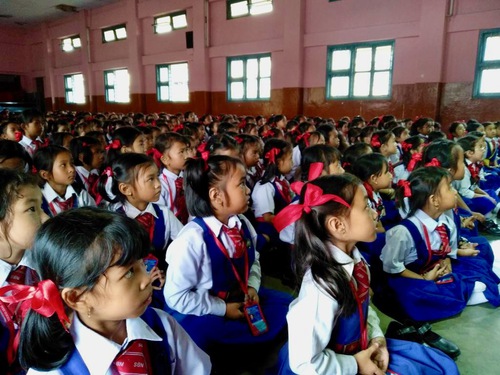 The many girls at the first school watch and listen attentively before starting the 5th exercise.

The school gave the practitioner a letter of appreciation, which states:

This is to certify that (name of practitioner) of Falun Dafa organized two days of sessions on the practice of Falun Dafa in our School and Boarding. On July (date), 2018, she gave training to the boarders of (name of school) and on (date) from morning 9 o’clock till evening 3 o’clock. She continuously trained everyone class by class, which [will be] a boon to them in the future to grow in discipline and concentration. The five kinds of exercises were a source of help for them to get rid of the negative energy and fill them with positive energy and thus to grow in Truthfulness, Compassion and Tolerance. It was a wonderful experience for the students who profited a lot from her selfless service. [Falun Dafa’s] methods are simple and [its] content is deep and divine. I thank (name of practitioner) for spending her time and energy for the students of (name of school) and for the handouts she distributed in the school for the better understanding of Falun Dafa.

We wish you all success in your endeavors for building up a better generation of good character and hope you’ll come again to renew the interest created in us.

Thanking you sincerely,(name of principal)

The practitioner held two sessions at the second school, which had 2,600 girls. More than 2,000 older girls attended the first session. The whole schoolyard was filled, even all the balconies above. It seemed as if girls in colorful dresses were everywhere. They wear them only once or twice a week, and they indeed looked like colorful “little flowers” all around.

Although she had visited many schools in different parts of India in previous years, this was the practitioner’s first experience with so many children present at one session. 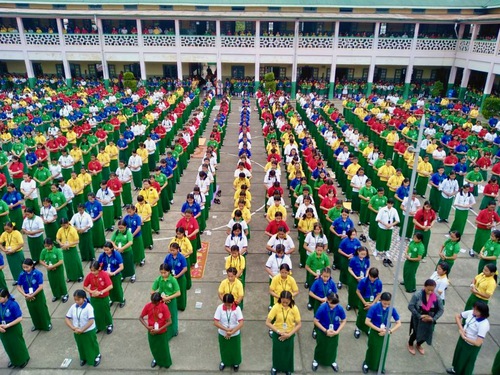 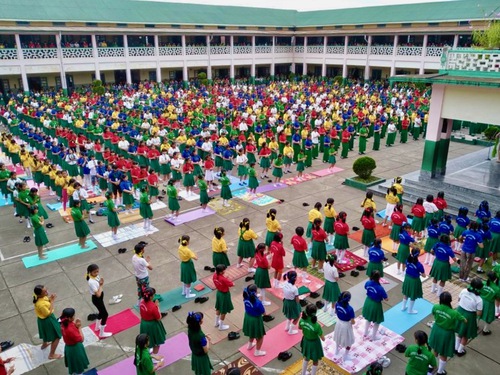 The first session at the second school included the older girls. Attendees filled the schoolyard and even the balconies above.

At the end of this session, the principal and the head girl thanked the practitioner. 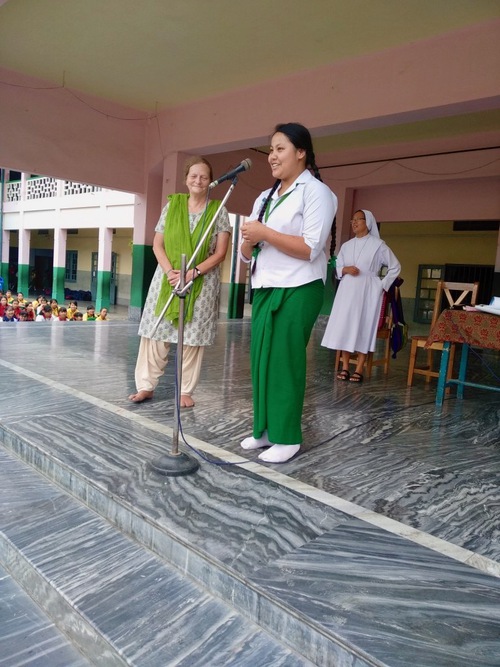 The school’s head girl happily gives thanks after the principal, seen at the back, had spoken.

An older girl said that she had been very sad and upset for quite some time about something that had happened in her life, but she felt so much hope and positivity during the Falun Dafa session. Many girls surrounded the practitioner at the end, happy to be photographed. 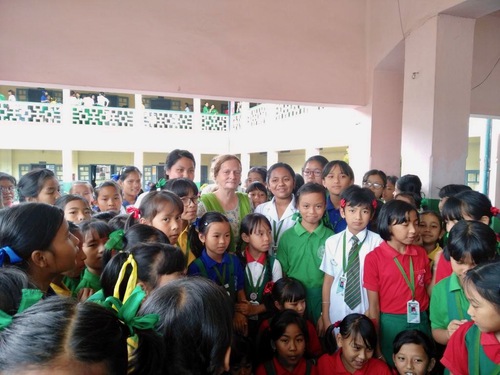 Many girls surrounded the practitioner after the end of the first session.

The second session was attended by a few hundred younger girls. Amazingly, the smallest girl (by size, not necessarily age) appeared to be the most attentive throughout the session. Most of the time she had her eyes closed and was totally quiet, fully absorbed. 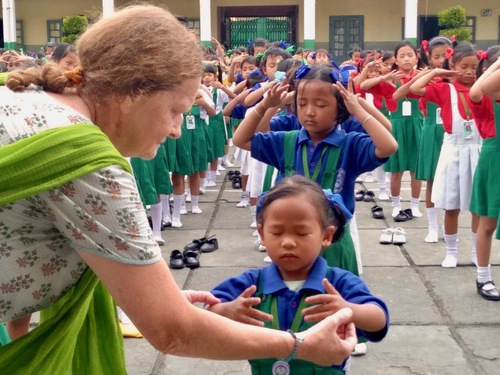 The smallest girl remains totally absorbed with her eyes closed, even while the practitioner helps her with the posture. 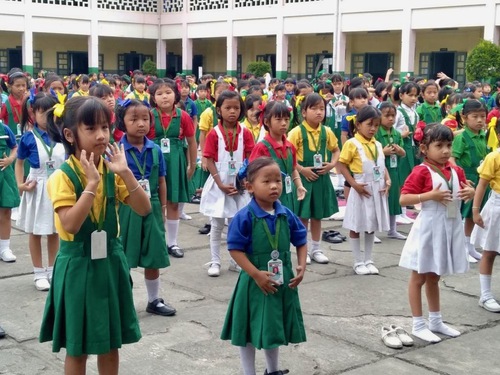 The same girl during the 4th exercise. 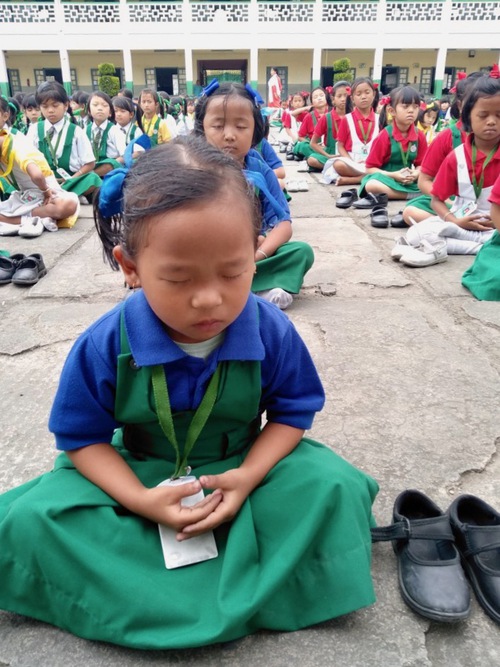 The same girl during the 5th exercise.

Miraculously, that day was the only day during the practitioner’s stay in Manipur with cloud cover—pleasant, “perfect” weather for such a historic event. All the other days were either too sunny, too humid, or too rainy.

It was indeed a memorable event with so many children and teachers present, all so quiet and focused, interested and absorbed, thoroughly enjoying these two sessions. The principal looked on with astonishment, which she noted in her appreciation letter:

Our school had the wonderful opportunity of the animating presence of (name of practitioner). She led the staff and students numbering 2600 into a meditation practice [of] Falun Dafa for about two hours. One could see the interest and seriousness of the students and staff [in] the meditation and exercise. The students were very responsive and happy.

We appreciate her generous availability and selfless effort to promote Truthfulness, Compassion and Tolerance through these exercises. I believe that all of us [staff and students] will put [these values] into practice and also share the rich experience with others.

I wish Falun Dafa all the best!

“Toronto: Children and Teachers Learn from Each Other During Minghui Summer Camp”