(Minghui.org) Practitioners of Falun Gong (also known as Falun Dafa) arrived at the world-renowned tourist attraction Trafalgar Square in central London on August 22, 2020, to raise awareness of the ongoing persecution in China, just as they had done many times in the past. 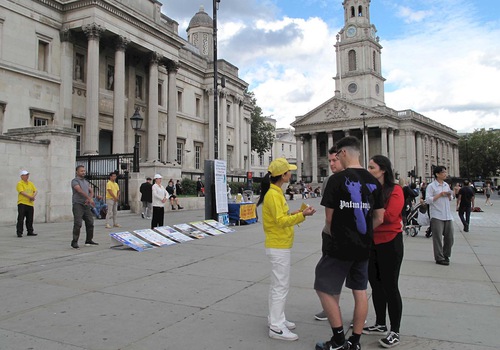 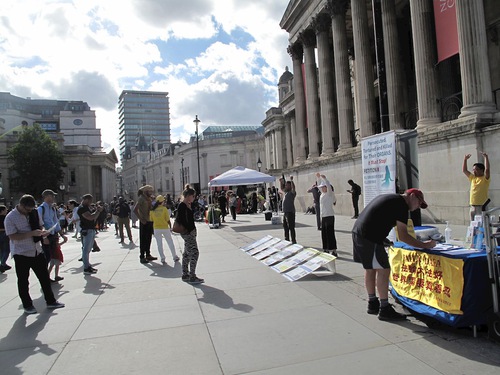 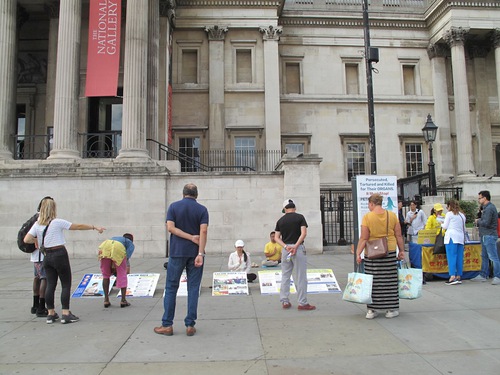 Falun Gong practitioners set up an information booth at the north platform of Trafalgar Square. Passersby stopped to read about the ongoing persecution in China and signed a petition to end the atrocities.

As the British government continues to loosen coronavirus restrictions and foot traffic has increased in the area, practitioners decided to resume activities at Trafalgar Square. They put up a banner saying, “Falun Dafa is good” and “The world needs Truthfulness, Compassion, Forbearance.” A poster called on people to sign the petition to stop the Chinese Communist Party’s (CCP) forced organ harvesting from practitioners in China, and six other boards displayed information to help people learn about the Falun Dafa.

Wendy, a practitioner, said that the major changes brought about by the pandemic has made many reflect on the meaning of life. People are reassessing what is right and wrong, and quite a few have come to recognize the evil nature of the Chinese Communist Party (CCP) by following the progress of the outbreak. Some began to seek out Falun Gong to learn the exercises and teachings. She often heard people thanking practitioners for telling them about the persecution. Others asked where they could find group practice sites. Many Chinese stopped to read about Dafa. 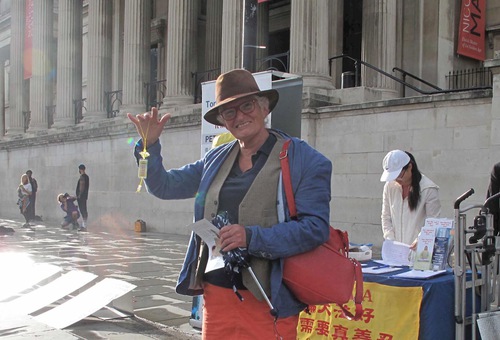 Near the end of the information day, a woman named Sallynae Selwyn came to the booth to sign the petition. She told practitioners the CCP’s barbaric act of taking practitioners’ organs was “shocking” and that she hoped her signature could help save lives. She said she knew of the CCP’s crimes and was worried for the plight of Chinese nationals. She hopes the younger generation in China can hold on to their independent thinking and “work hard to maintain their conscience.”

She said Falun Gong can help people keep a healthy mind during the pandemic and that her soul was touched by the energy emanating from practitioners. She felt uplifted standing together with practitioners and observing their unwavering spirit. “Please go to the parks to teach people the exercises. Just like lighting a spark, the fire will be passed on and benefit the whole society in the end,” she said.

“Now is the ideal opportunity to let people see you in the gardens. They need to find balance and encouragement. We must hold onto hope for the future generation.” 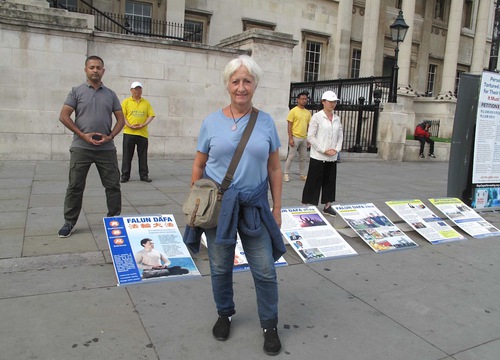 Joe, who lives in London, has practiced Taichi and other forms of qigong. She asked practitioners where she could learn the exercises in London after learning about the practice at Trafalgar Square.

“The energy is amazing. More people should come and do this.” She condemned the Chinese regime’s persecution of Falun Gong. “I read about the brutal repression on the display boards. This is terrible and shameful. But I believe people will still continue to practice it,” she said. 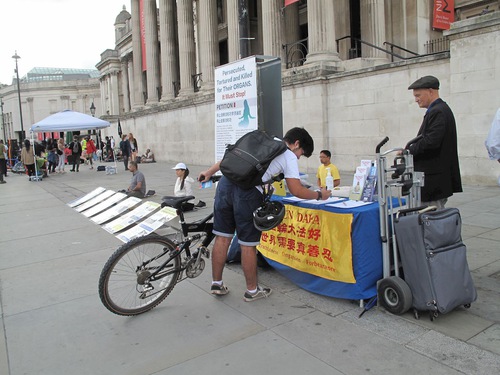 Diego signs the petition calling for an end to the persecution.

Diego, a university student studying music in London, passed by Trafalgar Square on his bicycle. He stopped to read the information displayed on boards and signed the petition to call for an end to the persecution.

He told practitioners he was not a stranger to meditation and cultivation practice as his mother is of Asian descent. He was struck by practitioners’ calm demeanor, and it made him very interested in finding out more about the practice on the internet.

“More people should know about this. It will definitely help them. There is so much chaos and unrest in the world nowadays. People are struggling to get on with their lives. If they spend a bit of time getting to know this, this will make them calmer, it will surely help them.”

Falun Gong is of Great Value, Taught for Free 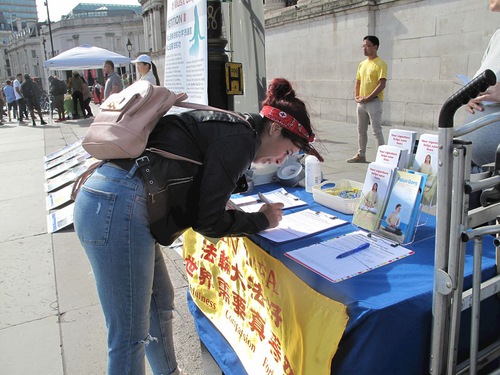 Cilea signs the petition to show her support for Falun Gong.

Cilea, a Moroccan who has worked in London for a year and currently lives in East London, saw Falun Gong for the first time at Trafalgar Square. She stopped to watch practitioners do the exercises and recorded video on her cellphone. “This is awesome and delightful,” she said.

She said she did yoga in the past and thinks Falun Gong is of great value: “It makes one feel extremely relaxed and alert. Such a wonderful practice, yet it’s taught for free.”

When she learned that practitioners in China are tortured for their belief, she told practitioners she knew of the CCP’s deception from covering up the pandemic. She said the communist regime should be condemned by the whole world and signed the petition to show her support. 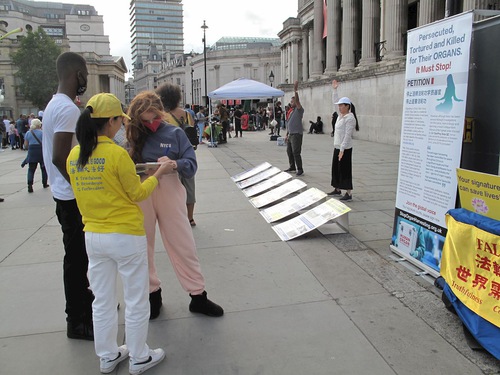 Scarlett (the woman signing the petition) and Vandre (the young man watching practitioners do the exercises) signed the petition to call for an end to the persecution.

Scarlett was angered when told about the CCP’s harvesting of organs from practitioners. “I really don’t want to believe such a thing can happen. Doctors should save lives and heal the wounded. Yet their actions are the opposite. I think it is remarkable that you are here to tell people about this. Thank you,” she said.

Vandre, who was born in the Caribbean islands, was drawn to Falun Gong’s unique energy and wanted to learn the exercises at once. Learning of the persecution in China, he said, “This makes me sad. I cannot understand why people are killed for practicing meditation. In fact I find this very effective. Standing here and watching you do the exercises makes me feel very relaxed. I must learn this.” 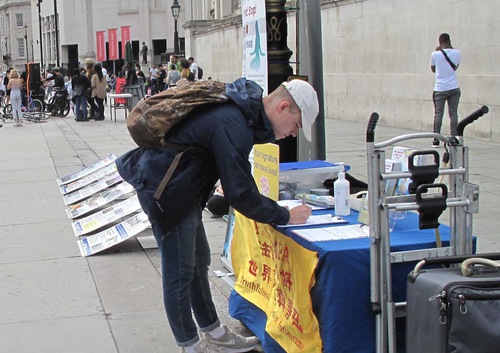 Patrick signs the petition calling to end the persecution in China.

Patrick, a university student studying medicine in London, read all six display boards. He said he had heard about the persecution several years back. Recently he has heard more and more people exposing the evil nature of the CCP in mainstream British society. He realized it is very difficult for practitioners to persist in telling people about the atrocities for so many years. He said he admires practitioners and thanked them for their longstanding efforts.

He signed the petition and hopes the U.K. government will do something to stop the brutalities as soon as possible.

Spreading Information by Word of Mouth 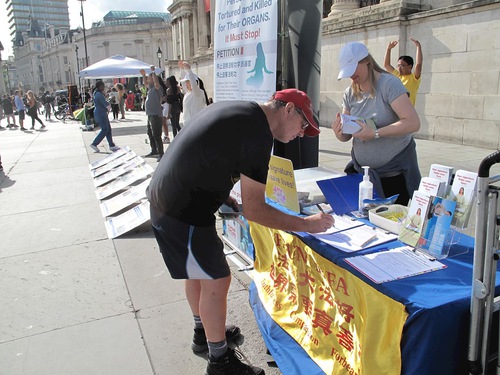 Michael Donlevy signs the petition calling on the U.K. government to end the persecution in China.

“Your meditation makes one feel wonderful. The message you have is clean and clear,” said Michael, who heard about Falun Gong for the first time. He agrees with its principles of Truthfulness, Compassion, and Forbearance and believes that living by these principles will elevate one’s conscience.

“I’m devastated to read about forced organ harvesting. I don’t want to believe this is happening in today’s society. It represents the darkest age in human history,” he said. He also pointed out, “The persecution of humanity has always been despicable. The communist regime’s suppression of Falun Gong is even more abominable. This dictatorship persecutes Falun Gong to safeguard its power, suppressing a peaceful and kind force. This is completely wrong. We must do our best to stop this. I am glad to sign this petition.”

We Must End This Persecution

Rus, a psychologist from Liverpool visiting London, met practitioners by chance at Trafalgar Square. He chatted with practitioners for a long time and signed the petition to stop the persecution.

He told practitioners that the CCP’s actions in the past few months helped him gain a better understanding of its evil nature. “The CCP has been abusing its citizens. I want to ask the regime why is it afraid of such a peaceful practice,” he said. Shocked and angered by the regime’s 21-year-long persecution, including the killing of practitioners for organs, he said, “This is a crime against humanity and must be stopped.” 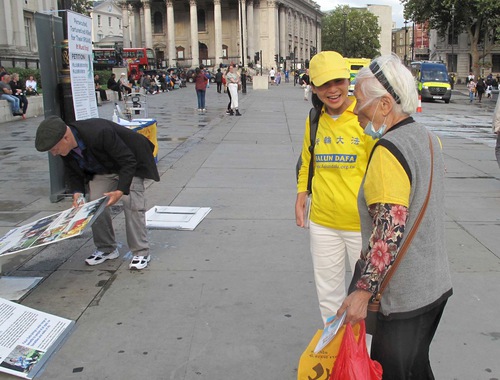 Mei Zhen, an 87-year-old who lives in Chinatown, walked up to practitioners at the end of the day to praise them for their efforts in raising awareness of the persecution.

Ms. Mei told practitioners she fled to the U.K. from Shanghai with her family 50 years ago to escape the CCP’s persecution. “We should let more people know how terrible the CCP is. Truthfulness-Compassion-Forbearance is good. There’s no doubt about it. Everyone should practice Falun Gong,” she said.