Germany: Support for Falun Dafa During Information Event in Remscheid

(Minghui.org) Falun Dafa practitioners in Germany held activities in Remscheid on September 12, 2020, which is election day in North Rhine-Westphalia. They set up an information booth to tell people about this ancient spiritual practice and to expose the Chinese Communist Party’s (CCP) 21-year-long persecution of Falun Dafa. Their activities attracted the attention of politicians and the general public. Many people signed a petition calling for an end to the CCP’s persecution. 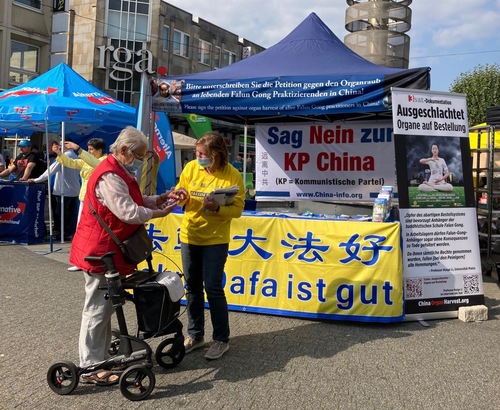 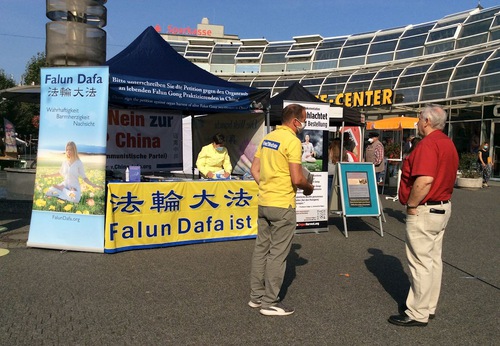 Practitioners held an event in Remscheid, Germany on September 12, 2020, to introduce Falun Dafa and expose the persecution in China.

As soon as practitioners set up their booth and hung their Falun Dafa banner in front of the Allee-Center early in the morning, people from various campaign booths came over and asked for information. As more people gathered on the square, practitioners demonstrated the Falun Dafa exercises. Upon hearing of the CCP’s atrocities committed against Falun Dafa, many people signed the petition and thanked practitioners for raising awareness.

A campaign volunteer told a practitioner, “I’ll certainly tell my representative about it [the persecution in China].”

An elderly man from a nearby booth talked with a practitioner for a long time and learned about the CCP’s atrocities. He took several copies of each brochure available and said he planned to tell his representative about the persecution. A young man from the same booth watched the exercise demonstration and expressed great interest in learning more about Falun Dafa.

Practitioners explained how the CCP is damaging society, using its recent conduct in Hong Kong and its cover-up of the pandemic as examples. A man from another campaign booth told a practitioner that his party was very interested in these topics. He took several introductory flyers and thanked practitioners for being there.

A young man from Vietnam was happy to see the Falun Dafa booth. He told practitioners, “I have worked in China for more than ten years. I am well aware of the situation there. You definitely should tell people about it.” He signed the petition and told the people around him, “Come and sign the petition!”