(Minghui.org) Henry is an energetic member of the Tian Guo Marching Band and attends many community events in Sydney, Australia. He has also traveled to Queensland, Melbourne, Hong Kong, and New York for various activities with the band. Though his bass drum weighs 20 pounds, he looks confident and at ease as he marches in the front line of the band.

Henry was not always this full of energy. Six years ago, he was burdened with multiple health issues, including a herniated disc in his lower back. The back problem made him so weak that he had trouble lifting a shopping bag and he needed to rest while walking up stairs.

What brought such changes to Henry? He recently shared his struggles, discovery, surprise, and joy with us.

Henry had been plagued by a host of digestive issues, including gastritis, peptic ulcer disease (PUD), duodenal bulb ulcer, and stomach cramps. He carried medicine with him wherever he went. Gastrointestinal bleeding occasionally left him in a coma, and he was hospitalized many times so he could have transfusions.

For many years, he did not know the feeling of hunger, except for sudden, extreme pain. When that happened, his whole body would shake involuntarily and he would curl up in a ball. To avoid falling into that state, he had to eat very often, even when he was not hungry. This caused weight gain and he became obese and had high lipid levels. Stomachaches would wake him in the middle of the night, and he had to sleep on his stomach to minimize the pain. This, however, led to chronic neck problems.

Henry's most problematic issue was a herniated disc in his lower back. He visited many doctors, including some who specialized in Chinese medicine, in a quest for healing. They would relieve some of his pain, but were unable to cure it. When the pain struck, Henry would have to switch positions often, from sitting to standing to lying, with each position lasting no more than half an hour.

Henry had a special chair so that his legs could be at different levels while avoiding having a 90-degree angle between his thighs and upper body. “When I went out shopping, I always took my son, who was in elementary school,” Henry recalled. “Seeing how he could carry the shopping bags without difficulty, while I could barely make it without carrying anything, I was really ashamed.”

Henry often wondered why he had to suffer like he did, but nobody could give him an answer. In the end, he had no choice but to stop thinking about it and just continue with his difficult life as best he could.

One day in 2004, Henry came across a Falun Dafa booth during an exhibition at Macquarie University near his home. Having heard and read a lot of the Chinese Communist Party's (CCP) propaganda against the practice, he was curious to find out more. “When I thought about this, however, I found that a lot of fear arose in me, as if a spy was looking at me from nearby and other people were also paying attention to me,” he said.

He picked up some printed materials and a DVD and when he got home, he read them and realized that Falun Dafa has been wronged by the CCP. With the goal of improving his health, he learned some of the exercise movements, but did not understand the importance of reading the books and applying the teachings of Falun Dafa in his daily life. He gradually stopped doing the exercises and forgot all about it.

Time passed quickly. In 2014, out of boredom, Henry decided to learn more about Falun Dafa. He downloaded Zhuan Falun, the main teachings of Falun Dafa, from the internet. Several paragraphs into reading the book, he found that it made a lot of sense. “The book talked about how to be a better person and it was easy to understand,” he explained. “It was very enlightening and showed me a path toward letting go of attachments to material interest.”

After reading through the book once, Henry was very excited. “It is about cultivation practice; namely, about returning to your origin. I'd always thought about this in the past and was happy to find that other people were thinking in the same way.”

In the beginning, Henry continued playing video games or killing time online as usual, but after a while, he found that doing those things was just a waste of time. Instead, reading Zhuan Falun and other Dafa books was more meaningful and productive. “The teachings are very profound and Master Li (the founder) explains things clearly, which solved many questions I had,” he said.

After Zhuan Falun, he started to read the other 40-plus Falun Dafa books, taking about three days to read each book. “I knew this was something I had been waiting for,” he explained. “I feel so fortunate because my life is no longer like a ship without a rudder.”

Looking back at his life, Henry said it had led him to think more about the purpose of life. “There were many difficulties in life and sometimes it was as if there was no road ahead. But in fact, it was a time to reflect on the more important topics, such as where we came from and where we are headed,” he said. “Without this process, I would have probably been lost in this earthly world just like many other people. That is why I am so grateful to Master Li.”

Doing the exercises was not easy for Henry, and due to his herniated disc, he could not attend group meditation. But understanding how precious Falun Dafa is, he did not give up and studied the teachings at home while doing the exercises. “The sitting meditation was the most challenging, but I tried to do it little by little,” he said.

As he continued to do the exercises as best he could while applying Falun Dafa's principles of Truthfulness-Compassion-Forbearance, Henry found that his body was purified as described in Zhuan Falun. One day, he went to the bathroom several times and discharged a lot of black substances that were dirtier than the sewage. “But throughout that day I did not have any uncomfortable feeling and I knew that Master Li was adjusting my body,” he said.

One night, he woke up because of stomach pain. “From Falun Dafa's teachings I knew that this was a process of eliminating karma, so I ignored it and went back to sleep,” he explained. Since then, the stomach problems that had bothered him for 20 years have never returned.

Another test was a toothache, which he had suffered from every two or three days. Once when doing the second set of exercises, Henry felt his teeth aching again. He tried pressing the root of his teeth with his tongue, but that did not help. Then he thought that it could be related to karma that he had accumulated in the past, and continued doing the exercises undisturbed. A few minutes later, the pain went away and it never came back.

Both the miracles with his stomach and his teeth happened during the first two months after he began to practice. His lower back, on the other hand, also improved dramatically. “It’s unbelievable—your back is much stronger than before,” his friends commented in surprise. Within six months, his herniated disc and other health issues had also disappeared.

As a Tian Guo Marching Band member, Henry travels all over Australia and even to other continents. “I never thought I would be healthy like this,” he said. “It’s beyond a dream.” 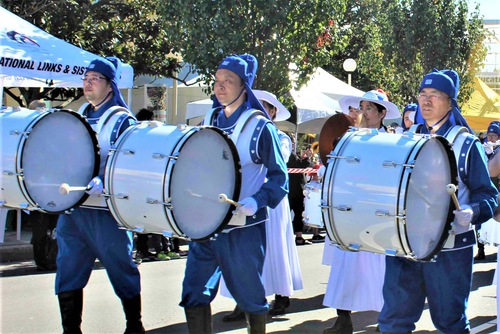 Seeing the tremendous changes in Henry, his wife and son both became Falun Dafa practitioners as well. Her wife’s stiff shoulder and mouth ulcers healed after taking up the practice. She also joined the Tian Guo Marching Band as a means to share the beauty of Falun Dafa.

“Germany: Support for Falun Dafa During Information Event in Remscheid”