(Minghui.org) Today's news from China includes incidents of persecution that took place in 18 cities or counties in 9 provinces, where at least 49 practitioners were recently persecuted for their belief. 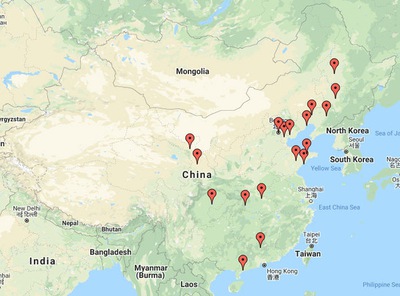 Mr. Zhang Chongyue from Xingcheng City passed away on August 7, 2020. He was 40 years old.

Mr. Zhang was tried secretly by the Suizhong County 610 Office and the Suizhong County Court on May 12 and 13, 2008. He was sentenced to 10 years in prison. Two years after returning home in 2018, he passed away. He is survived by his wife, two daughters, and a ninety-year-old mother.

Since the CCP started to persecute Falun Gong in 1999, Ms. Guo was sentenced twice to prison. Her prison terms added up to nearly ten years. She was also detained many times.

Ms. Guo was sentenced to one year in prison, to be served outside prison in January 2020. Since then the judicial department and her town’s judicial office personnel repeatedly harassed and intimidated her. She passed away on August 22.

The Domestic Security Division’s 610 Office repeatedly called her and harassed her in May, 2020. They told her to sign paperwork, and threatened her that she would be detained if she did not sign. Ms. Bai refused to cooperate with any of their demands.

Police officers went to Ms. Chen Shaoqing’s home in Meihua Town and harassed her at the end of August 2020. They took down a calligraphy writing from the wall. They told her to sign paperwork, but she refused.

Recently, a group of people from the local neighborhood committee harassed Ms. Cui Chengxiang, her son, and daughter-in-law in Anning District from time to time. This disrupted their lives and caused the family and their neighbors anxiety.

Every time a group of people knocked and pounded on their door. They wanted to freeze her bank account and impound her private property. They kept pressuring her to sign paperwork. They contacted her son around the clock. They have also been constantly monitoring her.

Ms. Zhang Xiuyun and Mr. Zhang Guochen from Liyuan Town, Kaiping District, were harassed respectively by people who claimed to be from the Liyuan Town government on August 28, 2020.

Using the pretense of not adversely impacting the future of their children and their family members, these people try to force practitioners to sign documents that were prepared in advance to quit practicing Falun Gong.

Sun Baoquan and Wang Renhua, officers from the Cuiping Police Station, broke into Ms. Qiao Ruirong’s home and ransacked the place on August 31, 2020. They confiscated all Falun Dafa books and photos of the founder of Falun Gong.

Five or six officers from the Changjiang Road Police Station, Development Zone, and Chen Yunzhang, director of security of Wutaishan Road Neighborhood Committee, went to the homes of Ms. Liu Xia and Ms. Xu Xiuyun on August 27, 2020. They asked the two practitioners if they were still practicing Falun Gong. Both practitioners answered, “Yes!”

An officer threatened Ms. Xu, “If you continue to practice, you will be taken to a forced labor camp.”

On August 31, she was again arrested and taken to the Guangshui City Detention Center by the police.

Ms. Chen Facui, retired employee of Yiling Hospital, Yiling District, was arrested on August 25, 2020. She is being held in the Wujiagang Detention Center.

Mr. Zheng Yujie, Ms. Zheng Yanmei, Mr. Zhang Renfei, and Ms. Deng Jing from the Haidian District were arrested on July 19, 2020. They were interrogated by the Beixinqiao Police Station, the Hepingli Police Station, and the Criminal Police Team of Dongcheng District.

Ms. Yu Aili was held in the Changchun City No. 4 Detention Center.

Before she practiced Falun Gong, she had many illnesses, including a severe kidney illness, and had to stay home. After she began practicing, all her illnesses were resolved. She is now held in custody and unable to practice for a long time; symptoms of her previous illnesses resurfaced.

Ms. Han Yufeng from Yongling Town, Xinbin County, was arrested by Wang Yu, director of the Yongling Police Station, when she distributed Falun Gong materials on August 26, 2020. She was reported to the Domestic Security Division. She was placed in criminal detention.

Ms. Song Liqin was tried by the High-tech Development Zone Court on July 28, 2020. She was sentenced to three years in prison.

Ms. Huang Zhiping will be tried by the Gaoping District Court on the morning of September 3, 2020.

Since the Political and Legal Affairs Committee of the Communist Party of China launched the “zero-out campaign” (a concerted effort to force each practitioner on the government's “blacklists” to renounce Falun Gong) across the country, practitioners in various townships in Ninghe District were harassed by their brigade, neighborhood committee, and police station.

Practitioners were forced or induced to sign the guarantee statements renouncing Falun Gong.

The authorities threatened practitioners and their family members that if they did not sign, they would be dismissed from work, or it would adversely impact the education and employment of their children or grandchildren.