Finland: Introducing Falun Gong and Raising Awareness of the Persecution in China

(Minghui.org) Falun Gong practitioners held activities at Kirkkopuisto, a park in Hanko, Finland on August 6, 2020, to introduce the Falun Gong meditation practice and its persecution by the Chinese Communist Party (CCP).

Hanko is a small town 130 kilometers from Helsinki, the capital of Finland. Many residents speak Swedish in addition to Finnish. With its beautiful beaches and pleasant scenery, Hanko is a popular tourist attraction.

“I tell my students about Falun Gong,” said Katanina, a teacher in Espoo. She said she teaches world religions and tells her students about persecution and human rights violations.

After enjoying their ice cream, four boys ranging from three to six years old came to the practitioners' display. They learned the five sets of exercises. An older boy even taught the three-year-old how to do the hand movements.

“Our two families came to visit Hanko,” one of the fathers explained. “The children saw your exercise demonstration and asked to come. They like Chinese martial arts.”

The mother of three of the children said happily, “It’s great if they can learn to meditate!” The six-year-old boy took a flyer. 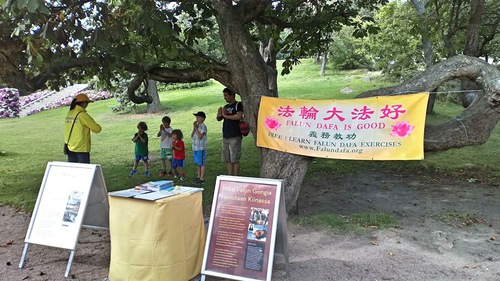 Four children and a father learn the Falun Gong exercises.

Local residents Mr. Ruolanto and his wife walk around the beach every day. They stopped to talk to practitioners. The couple said they’d learned about the persecution of Falun Gong from media reports. “The live organ harvesting is horrible,” said the husband. His wife said, “It’s great that you've come here and let us know about this.” 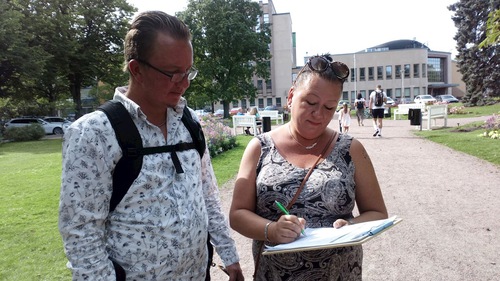 A passerby signs a petition against the persecution.

Mardo from Estonia stopped to read the banner. He said, “I know about Falun Gong. I watched reports about Falun Gong in ‘China In Focus’ (an NTDTV news program). I watch the program every week and I've learned a lot about China.” He signed the petition against the persecution.

“The human rights situation in China is very bad,” Helena said. She referred to the former one-child policy that has led to the abandonment of girls in favor of boys. “Many families in Finland go to China to adopt girls,” she said. “The CCP’s policy is wrong. Girls are also very important.”

When she learned how the CCP covered up the coronavirus outbreak in China, leading to the current global pandemic, she said, “It's incredible that [Finnish] media did not report this well and people do not get this information.”

Falun Gong was first introduced to the public in 1992. Nearly 100 million people across China were soon practicing Falun Gong after experiencing improvements in their health and character. Jiang Zemin, former head of the Chinese Communist Party (CCP), perceived the spiritual discipline's growing popularity as a threat to the CCP's atheistic ideology and issued an order to ban Falun Gong on July 20, 1999.

Minghui.org has confirmed the deaths of thousands of Falun Gong practitioners due to the persecution over the past 21 years; the actual number is suspected to be much higher. More have been imprisoned and tortured for their faith.