Stuttgart, Germany: You Must Continue Exposing the CCP's Persecution

(Minghui.org) Falun Dafa practitioners held activities on Königstraße, Stuttgart’s main shopping street, on August 1, 2020, to demonstrate the Falun Dafa exercises and to raise awareness of the ongoing persecution of the spiritual discipline in China. 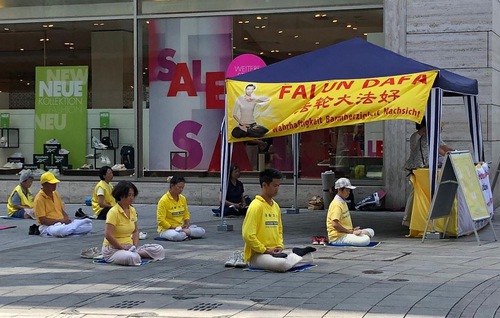 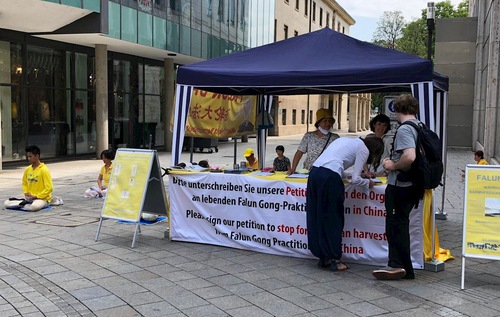 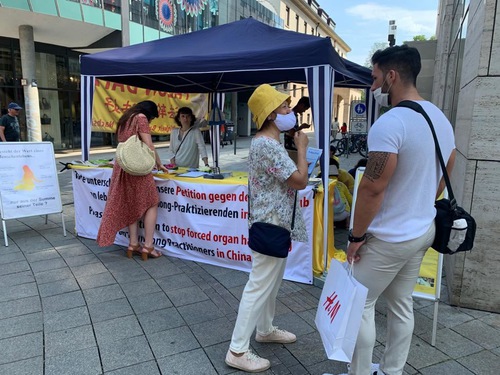 Tears came to a young woman's eyes as she listened to practitioners describe the brutal persecution practitioners face in China. She said her father came from Romania, a former communist country, so she understood the ruthless nature of communist regimes. She signed the petition calling for an end to the brutality and said she would read more about Falun Dafa online. She thanked practitioners for their peaceful resistance and said, “You must continue telling people about the persecution.”

Another young woman was attracted by the tranquil exercise music. She told practitioners she had watched a program on TV about the Chinese communist regime killing Falun Dafa practitioners for their organs. She was well-informed about the persecution in China and immediately signed the petition to show her support.

It was a hot day with temperatures reaching 33C (91F). There was a fountain opposite the information booth. Many passersby took a break by sitting next to the fountain and watching practitioners do the exercises. A man in his 70s spoke to practitioners for quite a while. When he learned that Falun Dafa is persecuted in China, he said he absolutely believed it was true because the CCP is the world’s biggest dictatorship.

A middle-aged woman read the message on the banner in front of the information booth. She said she had never heard of the persecution in China. As practitioners explained the situation to her, she said she knew what they told her was true because the CCP is capable of doing such things. She took various brochures and asked for the website address where she could sign the petition.

Several Chinese people passed by the booth that day. A young Chinese student quickly agreed to renounce his membership in the CCP and its affiliated associations using an alias. He said he would pass on the information about the persecution to family members in China, hoping they would realize Falun Dafa is demonized by the government and will quit the CCP as well.

“Finland: Introducing Falun Gong and Raising Awareness of the Persecution in China”

“Woman Tortured and Incapacitated in Custody, Faces Trial for Her Faith”