Raising Awareness in Washington, D.C.: Carrying on the Spirit of the April 25 Appeal

(Minghui.org) Twenty-one years ago, more than 10,000 Falun Dafa practitioners peacefully appealed to the Chinese regime after dozens of practitioners were illegally detained in Tianjin. The April 25, 1999, appeal in Beijing created a sensation throughout China and overseas, and displayed practitioners' strong spirit and noble character.

After the peaceful appeal, however, the Chinese Communist Party (CCP) mobilized the entire state apparatus and launched the bloody persecution of Falun Dafa practitioners in July 1999. The regime even ordered that practitioners be killed for their organs.

For 21 years, practitioners in China and overseas have persevered in raising awareness of the persecution by exposing the CCP's crimes and explaining the facts about Falun Dafa using many peaceful methods. 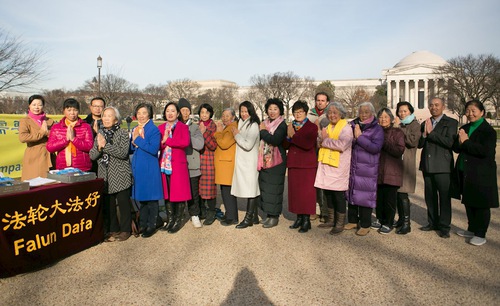 Practitioners send greetings to the founder of Falun Dafa at the National Mall in Washington, D.C., where they regularly come to raise awareness of the persecution.

The National Mall is a must-see destination for tourists visiting Washington, D.C. On the pathway between the National Gallery of Art and the National Air and Space Museum, not far from the U.S. Capitol, practitioners set up display boards and hand out informational brochures to raise awareness of the persecution in China. Tens of thousands of tourists from around the world pass the spot every day. 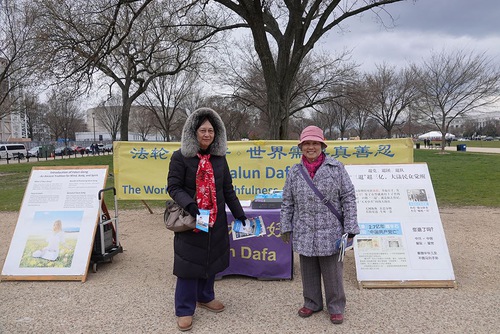 Practitioners raise awareness about the persecution 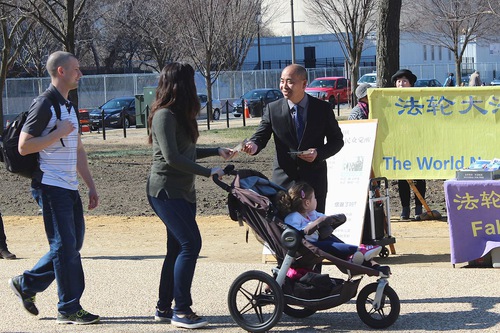 A practitioner passes out informational brochures to people 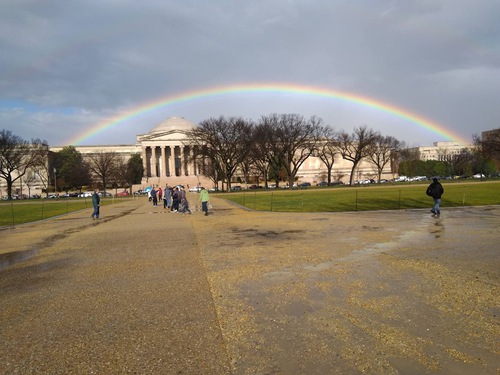 The rain stopped and a beautiful rainbow appeared above practitioners after a day of raising awareness at the National Mall on December 30, 2019.

Practitioners in D.C. have come to the National Mall regularly for years to help Chinese tourists learn about Falun Dafa and the CCP's persecution.

The practitioners who come to the National Mall include an engineer, a retired entrepreneur, physicians, and researchers. The oldest among them is 87 years old. Each one of them is knowledgable about China's modern history and understands how the CCP has persecuted Chinese people throughout its various political campaigns. Each practitioner also has an inspirational story about how they uplifted their character and health by practicing Falun Dafa. Some of the practitioners who come to the National Mall had been persecuted in China for their faith.

Practitioners come to the National Mall every day, except on Christmas when the National Air and Space Museum is closed. Heart-warming stories often unfold as they stand there, sometimes in harsh weather conditions. They are often moved and feel that their efforts are worth it.

The Man Who Received an Organ Transplantation 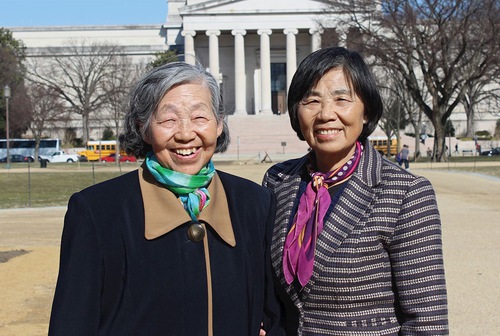 Ms. Wu Fengying is a retired dentist and has been clarifying the truth to Chinese tourists at the National Mall for more than 10 years. She joked that her skin has become suntanned, but she has never had any qualms about coming here every day. She simply wants to do something to help Chinese people. She came across a Chinese man one day who left a deep impression on her.

Five middle-aged Chinese men passed where Ms. Wu and other practitioners were handing out information. They were in suits and looked like officials. One of them looked at the exhibition boards and commented loudly, “What's wrong with organ harvesting? I had a transplantation surgery!” Ms. Wu happened to hear that. So she asked him, “Do you know where the organ came from?” He was stunned for a moment, then said, “probably from a criminal.”

Ms. Wu told him that only several thousand criminals are executed every year in China, and the number of voluntary organ donors is only several thousand. But according to publicly available data, 60,000 to 100,000 organ transplantations are conducted in China each year. What has caused this huge discrepancy?

The man began to think. He raised his confusion about the propaganda that the CCP spread to demonize Falun Dafa. Ms. Wu explained the facts and resolved the questions he had. The man continued his conversation with Ms. Wu and did not go into the museum with his friends. They talked for a fairly long time. When his four friends came out of the museum, the man grabbed them and pointed at one of them, saying, “This is our leader.” He asked Ms. Wu to help all of them withdraw from the CCP.

Diligent Efforts and Firm Will

Ms. Wang Chunrong worked as the chair of an accounting firm in Dalian, China. Her sister Ms. Wang Chunying served as a chief nurse in a grade A tertiary hospital before she retired. They were both held and tortured in the notorious Masanjia Forced Labor Camp for their belief in Falun Dafa. Recalling that experience, Chunrong said that some people there knew what Falun Dafa is and helped her secretly. She wants to help more people learn the facts about Falun Dafa. 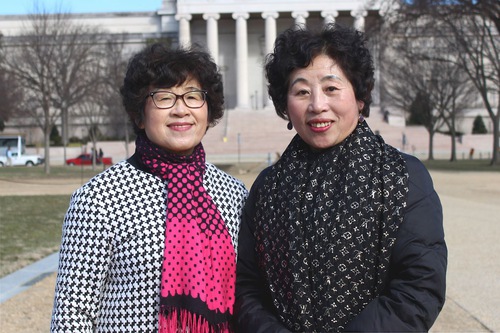 Mr. Wang Chunrong (left) and Ms. Wang Chunying (right) have clarified the truth about Falun Dafa at the National Mall for years.

Chunrong joked that she is an amateur photography enthusiast because the tourists love the photos she takes for them. Chunying is like a tourist information officer. She knows the nearby tourist sites and restaurants very well and often offers guidance to tourists. Although some Chinese tourists are not friendly to them because they believed the Chinese regime's propaganda, the two sisters never get upset and always welcome everybody in good spirits.

One Spring, Chunrong saw a Chinese man who looked like an official reading an exhibition board that displayed information about Falun Dafa. She greeted him. The man told her, “I joined the CCP when I was 18 years old. Do you know what I do for my work?”

“I don't know whether my guess is right,” Chunrong answered, “I think you must work for the Chinese embassy.”

He was amazed to hear her guess because he indeed worked for the Chinese embassy. He started to talk more openly. He told Chunrong that he thought the CCP is indeed no good, “But an average person has no power to oppose the CCP.”

Chunrong said, “Regardless of what the CCP is, you can withdraw from it and choose your own future.” They had a good rapport and the man asked, “How do you suggest opposing the CCP?” Chunrong said, “If people cannot solve it, heaven will. Heaven has the final say.” He nodded with a smile and agreed to withdraw from the CCP.

To help Chinese people learn more about Falun Dafa in a short time, Chunrong, in her 70s, learned to drive so she could transport more display boards and informational materials. She also learned English and talks to people in English about how she has benefited from practicing Falun Dafa and how the CCP persecuted her in China.

A man in his 30s learned the truth about Falun Dafa and came to understand that the CCP is deceiving people. He told Chunrong with emotion, “Auntie, I feel so happy. My heart is filled with joy. This is the most joyful moment in my life. I will learn Falun Dafa as soon as I go back to China.” Before he left, he shook Chunrong's hand and said, “Auntie, trust me, I will become your fellow practitioner.”

“Children Are Our Future” 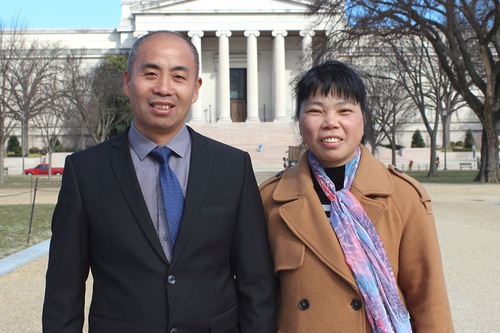 Mr. Liu Dexi and his wife have been raising awareness of the persecution in China at the National Mall since they came to the U.S. three years ago.

Nobody would imagine that this cheerful man with such an upright figure was held in prison for 13 years because he refused to renounce his belief. Mr. Liu Dexi was excited when he came to the U.S. with his wife Ms. Luo Sujuan three years ago.

“I was running a business in China,” he said. “Many of my customers went overseas as tourists. They told me that 'Falun Dafa is everywhere around the world.' My wife and I would then talk to them about Falun Dafa and they easily accepted what we said.”

Now, in this free country, the couple can talk about Falun Dafa to tourists in an upright and dignified manner, and they really appreciate it.

Their daughter just graduated from the University of Maryland. Looking at those young tourists who came here from China, Ms. Luo always felt close to them. One day early last year, it was drizzling. Ms. Luo saw six or seven young tourists standing out in the rain. She worried that they would catch colds, so she went over and opened her umbrella for them. One asked her about the self-immolation at Tiananmen Square that she had learned about in a school textbook. Ms. Luo told them it was staged by the CCP and used to incite people to hate Falun Dafa. She explained more about Falun Dafa and asked them, “If Falun Dafa is really like what your textbook describes, why can people freely practice it in over 100 countries or regions?” They began to think. One girl kept nodding her head in agreement.

A Yellow Rose that Doesn't Wither 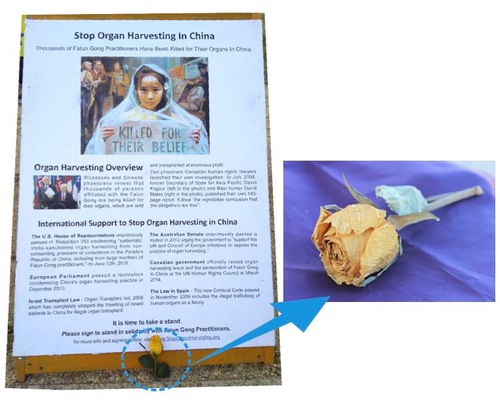 A rose from a tourist.

Practitioners have kept the rose in the above picture. It was from a tourist whose name is unknown. He left the flower beside a display board that explains the persecution practitioners are subjected to in China. Yellow roses symbolize remembrance and sympathy. The flower expresses what that tourist felt when he learned what practitioners suffer in China.

“Are You Truly Responsible for the Material Printing Site?”