(Minghui.org) After narrowly escaping being cremated alive 9 years ago, Ms. Liu Weishan passed away on October 28, 2019, after being in a vegetative state for years due to the persecution of her faith, Falun Gong. 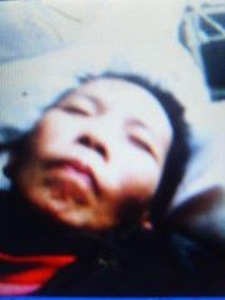 Ms. Liu, a former teacher in Xiangfan City, Hubei Province, took up Falun Gong in early 1999. She credited the practice for improving her health and enabling her to take on a more positive outlook on life.

After the onset of the persecution in 1999, Ms. Liu was repeatedly arrested and detained for disseminating information about her faith. She was put under house-arrest by her school and also had her salary reduced to a barely subsistence level of 100 yuan per month.

During an arrest in July 2001, Ms. Liu was held in a small cage for five days, which was so small that she couldn’t stand up.

She was force-fed for months in 2002 when she held hunger strikes to protest the persecution.

The authorities sentenced Ms. Liu to four years in prison on October 13, 2002, despite her serious condition from the hunger strike and punitive forced-feedings. She was sent to Wuhan City Women’s Prison the next day.

Wuhan Women’s Prison was notorious for its brutal torture of Falun Gong practitioners. Practitioners who refused to renounce their faith would be deprived of sleep, starved, or force-fed rancid food. Some practitioners suffered mental breakdowns or died from the torture.

Only a few months into Ms. Liu’s imprisonment, she became emaciated and mentally disoriented. Her menstrual period stopped. Her arms shook uncontrollably and her legs became permanently bent and disabled.

The authorities transferred Ms. Liu to the 364 Aviation Hospital on January 31, 2006, where she was kept for the next 14 years until she passed away.

After years of drug administration and lack of proper care, Ms Liu became paralyzed and her muscles atrophied. She remained in a delirious state and could only say a few words now and then. She kept telling the guards, “I want to go home!”

In August 2011, when the hospital moved, Ms. Liu was transferred along with it. During this time, staff from the 610 Office and Fan Zhiyong, the Chinese Communist Party secretary of the hospital, gave orders that Ms. Liu be taken to the crematorium even though she was still alive.

Fortunately, the crematorium staff discovered that her heart was still beating, so they refused to carry out the cremation and sent Ms. Liu back to the hospital.

For the next several years, the hospital didn’t provide any treatment to Ms. Liu. She remained in a vegetative state, not eating or drinking. She eventually passed away in the hospital on October 28, 2019. She was in her early 60s.

Summary of the Persecution of Ms. Liu Weishan, A Teacher in Xiangfan City, Hubei Province, Tortured Until Paralyzed and Mentally Disabled

Ms. Liu Weishan, A Teacher in Xiangfan City, Hubei Province, Was Tortured Until She Became Paralyzed and Mentally Disabled

“China: Once Loyal Party Members Are Quitting the Communist Party”

“Podcast (Cultivation): “Using Wisdom to Tell People the Truth Behind the Persecution””