(Minghui.org) Ms. Liu Weishan, a schoolteacher from Xiangfan City, Hubei Province, was arrested seven times from 1999 to 2002 by the Chinese Communist Party (CCP) for remaining resolute in her practice of Falun Gong. She has been mistreated and held against her will in detention centers and hospitals ever since.

Paralyzed and in a state of mental collapse for years, the authorities sent her to be cremated in 2011. Fortunately, the crematorium staff realized that she was still alive and refused to proceed.

She remains confined to the hospital to this day, in a vegetative state. It is forbidden for any visitors to see her.

Similar stories can be told by the loved ones of Falun Gong practitioners who have been tortured in hospitals and detention centers all across China. More details of Ms. Liu's case are presented below. 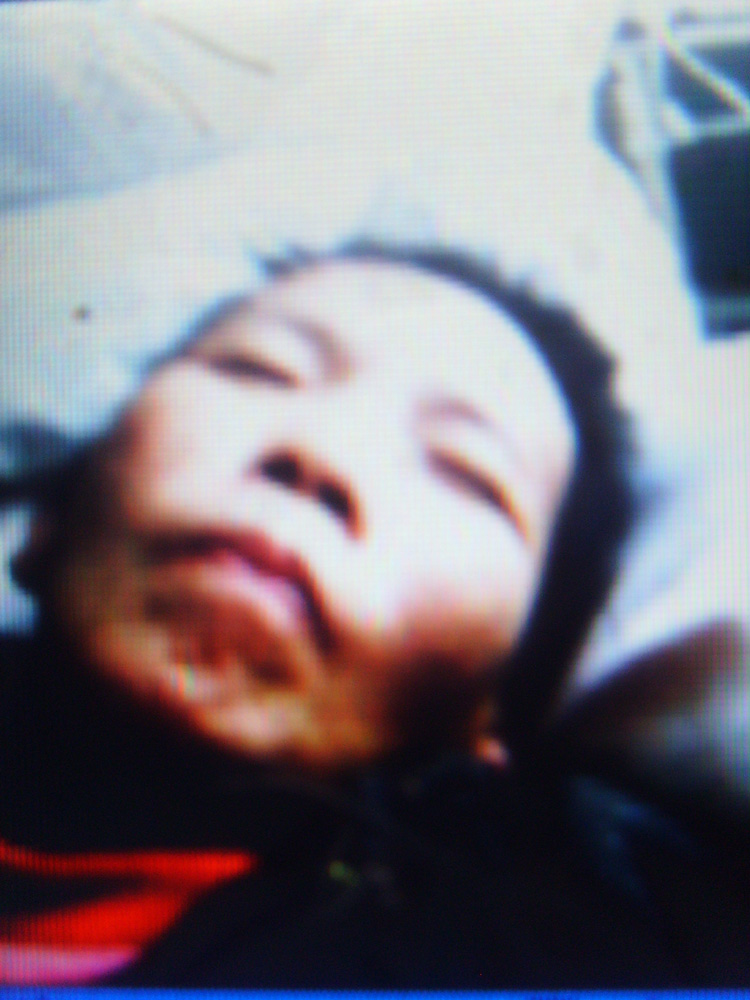 Ms. Liu Weishan, paralyzed as a result of persecution in prison

Ms. Liu used to teach at the school affiliated with Hanjiang Machinery Factory (currently the Aerospace Safety Equipment Company) and was recognized as an “Outstanding Individual” a number times by the factory and at the provincial level. Diligent and sincere, Ms. Liu was highly regarded and respected by her fellow teachers and the students.

In September 2002, Ms Liu was arrested for the seventh time! This time it was because she was distributing informational materials about Falun Gong.

The party secretary for the factory, Hu Daixin, told the 610 Office, “Don't let her go home this time. I will pay you as much as you want so long as you keep her inside.”

On October 13, 2002, Ms. Liu was sentenced to four years in prison by a Xiangfan City Court. Just a few months after she was sent to Wuhan Women's Prison, she suffered a mental collapse as a result of the abuse she had to endure.

Ms. Liu was secretly transferred to the 364 Aviation Hospital in Xiangfan City for “treatment” in January 2006.

By 2010, still mentally confused, she was also paralyzed and her muscles had atrophied. She could no longer hold herself upright, and her legs were bent and crippled. Occasionally she would say, “I want to go home!”

When the 364 Aviation Hospital moved from the suburbs to the city in August 2011, staff from the 610 Office and the hospital CCP secretary ordered Ms. Liu to be taken to the crematorium even though her heart was still beating. Thanks to the staff at the crematorium who refused to cremate her, Ms. Liu narrowly escaped death.

Ms. Liu is currently in Room 10 on the 6th floor at the 364 Aviation Hospital. She is not allowed to have visitors. According to her relatives, Ms. Liu has fallen into a vegetative state. She cannot eat or drink and is being given no medical treatment.

The following describes some of what Ms. Liu has endured:

Begins Practicing Falun Gong in 1999 and Regains Her Health

Ms. Liu Weishan used to be weak and in poor health, but after she started to practice Falun Gong in early 1999, she turned into a healthy person, full of vigor. Her colleagues witnessed firsthand how she changed within two weeks after beginning to practice. Three months later, all her illnesses were miraculously gone.

In 1999, the Chinese Communist regime started to openly persecute Falun Gong. Seeing that people around her were deceived by the overwhelming lies being broadcast by the government-controlled media, and out of her own desire to do what she thought was right, Ms. Liu started to tell people about the benefits of Falun Dafa. She told people not to believe the lies on TV. Party authorities in the factory put her under house-arrest for doing so.

In 2000, a truth-clarifying flyer appeared on the factory's bulletin board. The factory leaders then colluded with the 610 Office and arrested Ms. Liu on her way to work. She started a huger strike to protest. After she was released, her salary was reduced to just over 100 yuan per month, barely enough to live on.

On December 16, 2000, Ms. Liu was notified that she could resume teaching at the school. It was a trick. She was taken to a brainwashing center from the school campus. At the center, she was cruelly beaten, tied up, kicked, and forced to kneel on the floor by Nie Xiaowu, head of the political security section of the Xiangfan Police Department. She was detained in the Hanjiang Police Station for 18 days.

On July 3, 2001, Ms. Liu was seized by the security office of the factory and taken to Xiangfan City Forced Labor Camp, where she was locked in a tiny solitary cell for five days. The cell was so small that she could not even stand up and had to half squat.

In April 2002, Hanjiang Police Station officers broke into her home and searched it, taking away her Dafa books. In May 2002, the Xiangfan City Procuratorate had her arrested. Ms. Liu went on a hunger strike to protest and was later taken to the Xiangfan City First Hospital, where she was force-fed for 15 days. She almost died.

Sentenced to Prison after Being Arrested Seven Times

Ms. Liu was arrested for the seventh time on September 14, 2002, when she was distributing truth clarification materials. She was taken to the First Detention Center in Xiangfan City. After her many appeals failed, she began a hunger strike. She was then force-fed.

A few strong inmates held her head, hands and feet, and a tube was forced into her stomach through her nose. At the same time, the police directed the inmates to pinch her, pull her hair, slap her, and strip her. They covered her with a sheet, saying that this way it was easier for her to relieve herself.

She was force-fed twice a day, but the tube was only changed once every 15 days. When the tube was pulled out, the lower half was black. She endured such torture for 40 days, until finally she became very infirm.

On October 13, 2002, the already feeble Ms. Liu was secretly sentenced to four years in prison. The next day, she was taken to Wuhan Women's Prison.

Mentally Disabled after Being Cruelly Tortured in Prison

Wuhan Women's Prison put Dafa practitioners in solitary cells, handcuffed them behind their backs, and denied them food for several days; they were not allowed to sleep. The guards pretended to know nothing about what was going on. Practitioners went on hunger strikes to protest the cruel treatment. The guards then used the inmates' leftover meals along with old, spoiled food and soup to force-feed them. In these harsh conditions, many practitioners developed mental disorders or even died.

Only a few months after being taken to Wuhan Women's Prison, Ms. Liu was rendered mentally disabled. She became emaciated, she stopped menstruating, her arms trembled, and her legs were bent and crippled. She became extremely frail. She was frequently taken to the medical clinic and injected with unknown drugs. She was tied up with ropes and force-fed unknown drugs. The brutal force-feeding damaged her esophagus.

Hospital Follows Instructions from the 610 Office to Torture Ms. Liu

On the evening of January 31, 2006 Ms. Liu was secretly taken to the 364 Aviation Hospital for “treatment.” She was unconscious and in critical condition. Her name was not recorded in the hospital registration, and two people were assigned to watch her around the clock.

Her colleagues, students, and friends visited her and were shocked by her condition: “How could a healthy person end up like this? She is no more than skin and bones. Her whole body was crippled and deformed, and her eyes were dull.”

After February 11, 2006, when people went to visit her again, they saw a sign posted on the door of the ward that read, “Critically Ill, No Visitors.” Everyone who came to visit her was stopped and questioned.

By 2010, Ms Liu had become paralyzed and her muscles had atrophied. She was mentally confused and could only say a few words now and then. She kept telling the guards, “I want to go home!”

In August 2011 when the 364 Aviation Hospital moved, Ms. Liu was transferred with it. During this time, staff from the 610 Office and Fan Zhiyong, the CCP hospital secretary, gave orders that Ms. Liu be taken to the crematorium even though her heart was still beating.

While the staff at the crematorium were preparing for the cremation, they discovered that her heart was still beating, so they refused to continue. That is why Ms. Liu was taken back to the hospital.

Ms. Liu Weishan is currently in Room 10 on the 6th floor at the 364 Aviation Hospital in Hubei. A few of Ms. Liu's colleagues went to see her, but were stopped by a nurse surnamed Kang, who said, “I have orders from above. No one is allowed to visit her.”