(Minghui.org) The Chinese Consulate in Western Australia has contacted the City of Perth on many occasions, attempting to persuade officials to stop the city from issuing permits to Falun Gong practitioners for their activities and demonstrations.

According to a report by Nathan Hondros published by digital media WAtoday on February 11, 2020, the Chinese Consulate frequently contacts the city's executive management team to complain about Falun Gong practitioners' protests, but officials have always rejected these requests.

The City of Perth's community development general manager Anne Banks-McAllister told Mr. Hondros that the City of Perth has noted the Consulate's concerns, but continues to issue permits for Falun Gong practitioners' activities because they have always complied with the law. 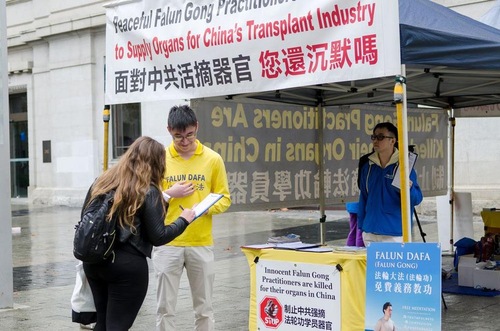 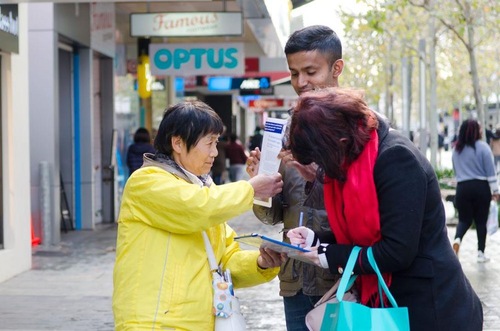 Falun Gong practitioners in Western Australia hold activities to raise awareness of the ongoing persecution in China in the capital city's central business district on July 19 and 20, 2019.

Falun Gong practitioners in Western Australia regularly hold activities throughout the city's Central Business District and near the Chinese consulate office to raise awareness of the Chinese Communist Party's torture and illegal detention of practitioners because of their belief.

In 2018, the Chinese Consulate's attempt to have Falun Gong barred from participating in the Perth Christmas parade was exposed by Australian media. Falun Gong had participated in the parade every year since 2008.

Albert Lin, representative of the Western Australia Falun Dafa Association, said the CCP had tried to stop their peaceful protests on countless occasions. “The City of Perth has done the right thing,” he said.

Mr. Lin said that practitioners were often harassed or threatened in Perth.

“Suspicious people would cause trouble at our information booths in the city. They shout at you and you cannot reason with them. For instance, at an event held in the city last year, a man yelled at us. Three passersby asked him to stop, but he refused. They called the police and he quickly left,” Mr. Lin said.

In recent years, countless reports have been published in Australian media about the CCP's infiltration and these reports have drawn the attention of elected officials, as well as ordinary Australians.

Mr. Lin told Minghui that a Federal Member in Western Australia once told him a story which provides insight into the Communist regime's attempts to influence Australian politics.

“A Federal Member won an election several years ago. When he was in office, he kept refusing practitioner's requests for a meeting. When I met this politician a few years later, he told me he had received a letter from the Chinese ambassador to Australia after winning the election warning him not to see Falun Gong practitioners. He was shocked and angry at the audacity of the ambassador. But he chose to heed the warning over the years as it was in his interest to do so,” Mr. Lin said.

In a piece he wrote for China in Perspective in August 2016, Chen Yonglin, a former consular officer who defected to Australia in 2005, warned that the Australian Government has caused Australia to gradually become China's backyard. “The Communist Party of China had begun a structured effort to infiltrate Australia in a systematic way,” Mr. Chen wrote.

Former Australian Security Intelligence Organisation (ASIO) boss Duncan Lewis, in an interview with the Sydney Morning Herald published in November 2019, said that any person was a political target. As well as targeting politicians, Chinese authorities were working to win influence over social, business and media circles, so as to place themselves in an advantageous position.

Mr. Lewis was ASIO's director-general of security for five years. ASIO is an intelligence agency and its primary role is to guard against foreign interference.

He said without inhibition in the interview, “Covert foreign intrusion from China into the heart of Australian politics is overwhelming” and was “something we need to be very, very careful about.”

He also told the Sydney Morning Herald, “The Chinese-Australian community could and should be as vital in the work against foreign covert influence.”