(Minghui.org) Falun Gong practitioners participated in a health expo in Odense, the third largest city in Denmark, from February 15-16, 2020. Many people took the opportunity to learn the benefits of Falun Gong. 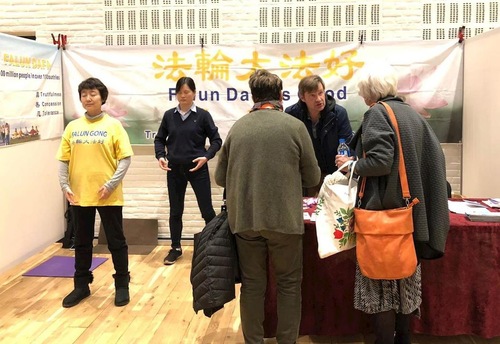 The practitioners’ exercise demonstration attracted many people’s attention. Attendees learned about the health benefits of Falun Gong and its principles of Truthfulness-Compassion-Forbearance. Many bought Falun Gong books. Some learned the exercises at the booth. 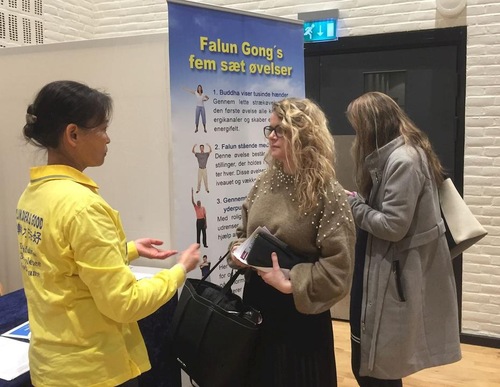 Mette, a local resident, learns about the background Falun Gong and its health benefits.

A woman named Anna said she teaches meditation classes. After hearing about Falun Gong from a practitioner, she bought the book Falun Gong and planned to invite practitioners to introduce the practice to her students.

Henrik from the city of Aarhus was happy to learn that there is a Falun Gong exercise site in his city. He took the information and wanted to learn Falun Gong in his hometown.

A young Chinese woman looked surprised to see Falun Gong at the health expo. She had learned a little about Falun Gong from NTDTV, but still had some questions which she was able to get addressed. She was appalled to hear the Chinese Communist Party’s atrocities against Falun Gong practitioners, especially its crime of harvesting organs from living practitioners.