(Minghui.org) Today's news from China includes incidents of persecution that took place in 10 cities or counties in 6provinces, where at least 15 practitioners were recently persecuted for their belief. 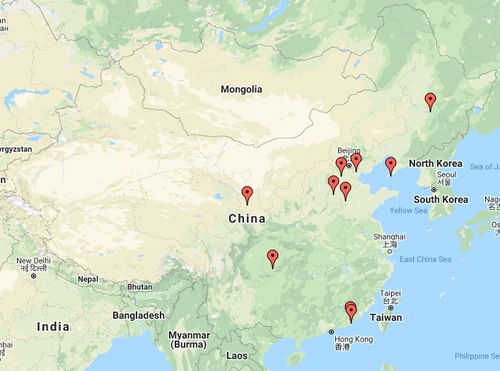 Ms. Zhang was arrested at home by two dozen officers from the Beixin District Police Station on the afternoon of July 3, 2019. The officers ransacked her home and confiscated items from there.

Ms. Zhao Mei, a retired teacher from Southeast Aluminum Workers University, was arrested for distributing information about Falun Gong in July 2017. She has since been detained at Wuhouci Detention Center.

Mr. Dai Ming and (wife) Ms. Hu Anlan were arrested and taken to a detention center on the morning of November 9, 2019. Mr. Dai was released on December 28, 2019. Ms. Hu was transferred to the Chongqing City Third Detention Center from Fuling Detention Center.

Ms. Ma Guizhen, 70, a resident of Dalian Development District, was arrested by officers from the Harbinlu Police Station on the morning of September 21, 2019. Her home was ransacked. Ms. Ma was taken the next day to Yaojia Detention Center and has been detained there since then.

Mr. Fu Decai and Mr. Tan Qiucheng were arrested by officers from the Lishu County Police Station on August 15, 2019, after police located Mr. Tan’s cell phone. Mr. Fu was detained for 12 days, then transferred to Siping Detention Center for criminal detention. Mr. Fu was released on bail for medical treatment on September 19, 2019.

Ms. Yang Yanqiu of Qiaoxi District, over 50, was tracked by plainclothes officers when she was putting up Falun Gong fliers in the morning on February 4, 2020. She was arrested at home at noon. Police confiscated items from her home, including a computer, printers, and other items. She was held overnight at the police station and released the next morning.

Ms. Jin was arrested at home by a dozen officers from the Anguo City Police Department and the Shifo Town Police Station on the morning of February 8, 2020.

Ms. Mi Lin was arrested by officers from the Lanzhou City Police Department at the end of September 2019. Her home was ransacked without her family being notified. Ms. Mi has been detained since then.

Ms. Wu Peishan lives in Guangxia Neighborhood, Jinping District. She and her husband (not a practitioner) were arrested at home by officers from the Jinsha Police Station on February 8, 2020. They are detained at the police station.