Canadian MP: “We Are Running Out of Time to Protect Our Security and Our Future”

(Minghui.org) During a debate in the House of Commons on November 17, 2020, over a motion demanding tighter restrictions against the Chinese Communist Party (CCP) to protect Canada’s national interests, Canadian MP Leona Alleslev urged the government to make fundamental changes to its foreign policy regarding the CCP. 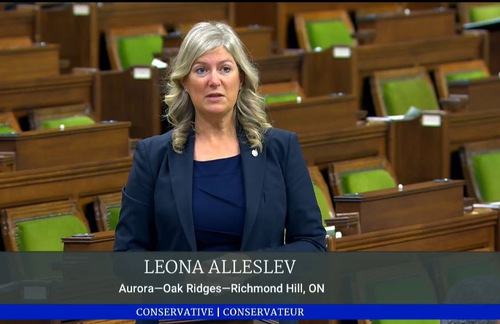 MP Alleslev said that, like many other Western countries, Canada assumed incorrectly that China would eventually liberalize, abide by the rules of international order, and co-operate with the democratic world because it saw the benefits of capitalist economies. As China has risen to become one of the most powerful, authoritarian states in history, other countries, including Canada, have just begun to realize that the threat and challenges it poses to the free world are imminent.

She added that the threat she was referring to wasn’t about the Chinese people but the ruling Chinese Communist Party.

She said, “Oppression in China is intensifying. It has imposed drastic and far-reaching national security law in Hong Kong. It continues to exploit people in Tibet. It has re-education camps where Uighurs are interned. Those are just a few of many such examples of its oppression.

“Probably the most disconcerting thing is that these increasingly oppressive acts, once hidden, are now much more blatant and out in the open. The CCP, the Chinese Communist Party's ambitions are not confined within China's borders. They represent an integrated approach across the world, employing social, economic, and military means to achieve its ambitions.

“The People's Liberation Army is hacking and we see intellectual property theft from everything from private corporations to the National Research Council.”

MP Alleslev also said that the CCP is using cyber-espionage and social media to influence and change public opinion in Canada. “We know of the united front work department, which brags in its training videos about how it has been able to influence elections and find pro-Beijing candidates who take positions in our democracies.”

She also talked about the CCP’s “Operation Fox Hunt,” which was a disguise for the CCP to target its dissents in other countries and silence its critics. She added that the CCP “keeps a list of those people in other countries whom it is able to influence and have power over.” She warned that company CEOs and elected officials should be aware of the CCP’s tactics and avoid becoming susceptible to Chinese influence.

Speaking of the Chinese telecommunication company Huawei, she said, “There is a [Chinese] national intelligence law that states that those companies are mandated to provide intelligence and information to the Chinese government and act in its best interest even when they are on Canadian soil, even if that means going around Canadian law to do it. That is frightening and it is a threat not only to our national security but to the rule of law, to democracy, and to our social and economic security.”

She emphasized that Canada must take “an integrated and comprehensive approach” in recognizing the CCP’s threat on Canadian soil.

“That must fundamentally change. The CCP looks to legitimize authoritarianism and seeks greater acceptance of that authoritarianism. It is using means to achieve that end by undermining and eroding democracy right here at home. Many of our democracies, as a result, are hanging in the balance.”

She also said that the good news is that many Western democracies around the world are recognizing the threat and they should have “one integrated, comprehensive plan” to address these threats.

“This is an existential threat. We are running out of time. We must do something to protect the citizens on our soil and the values we hold dear at home and abroad to protect the international world order, our democracy, our security, and our future.” she concluded.