(Minghui.org) The 2019 European Falun Dafa Experience Sharing Conference was convened at the Methodist Central Hall in London, Great Britain, on August 31. More than 1,000 practitioners from 29 European countries, as well as from the United States, Argentine, China, Vietnam, and Israel attended the conference.

The founder of Falun Dafa, Mr. Li Hongzhi, sent his greetings. He said: “The self-cultivation that Dafa disciples do is not merely for their own spiritual perfection, but also to help me save all lives. You have a mission to fulfill, and that is why you had the opportunity to become disciples of Dafa.” He also told disciples: “Those of you who haven’t done well so far should, with the time you still have, get going and do well what you should be doing before it’s over!” (“ Greetings to the Dafa Disciples Attending the Fa Conference of Europe,” Team Yellow Translation) 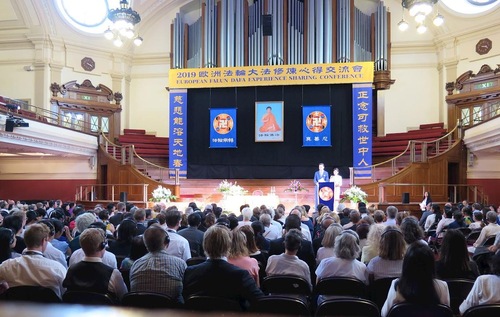 Seventeen practitioners from Italy, the Czech Republic, Austria, Germany, Poland, France, Sweden, Belgium, and Switzerland shared their cultivation experiences at work, participating in truth clarification projects including the media, promoting Shen Yun performances, and informing politicians about the persecution in China. The organizers arranged simultaneous translation into eight languages at the conference. Attendees listened to the speakers amid a solemn, peaceful atmosphere, and learned from their experiences. 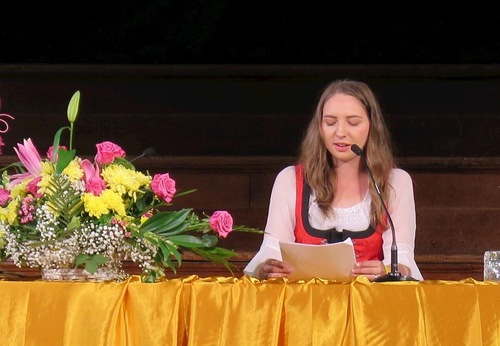 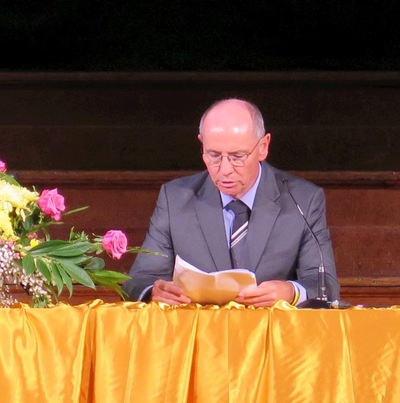 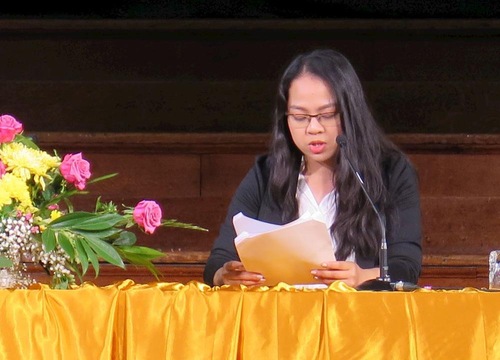 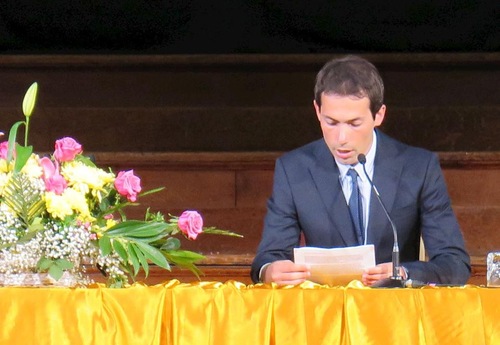 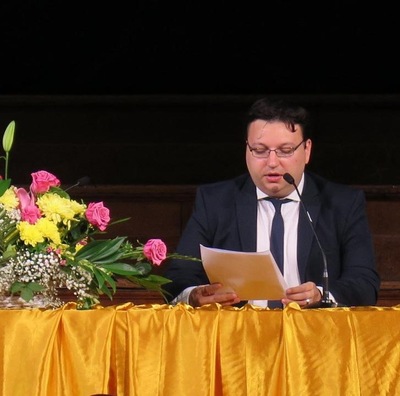 Practitioners present their cultivation experience articles at the conference

Having Faith in Master and Dafa in Difficult Situations

Raffaele, a practitioner from Italy, shared how he made a breakthrough when enduring hardship, and experiencing the power of Dafa.

He was asked to help Shen Yun drivers and technical staff navigate the roads in the local area. By the time he finished, it was 3 a.m. The next day he had to take the crew to the theater at 6:45 a.m. He was exhausted and irritated. He felt he could not take it any longer and wanted to cry. It was the hardest thing he had to face. Raffaele remembered that he is a Falun Dafa practitioner, and a righteous thought came to his mind, “This is a rare opportunity for me to improve.” He instantly felt lifted up by a warm current moving through his body. His mind became clear and he felt energized. His righteous thought changed him, and he was able to cope with the heavy workload.

Christina who is from Austria first read the book Falun Gong at the age of 8. She then read Zhuan Falun. She shared how she went through her childhood, teenage, and young adult years guided by the teachings of Falun Dafa. When she encountered setbacks, she often used the Dafa principles to turn what appears to be a bad thing into a good one.

Once she was caught in a conflict among her supervisors at work. People were spreading rumors about her, and she was afraid that her reputation would be tarnished. This would have an impact on her clarifying the truth about Falun Dafa to her colleagues.

She knew that as a practitioner she should not be depressed about the situation. She should regard this as a good thing. She carried on with her job and treated her supervisors kindly. The way she handled the unfair treatment won the respect of her co-workers. She had a chance to tell them about Falun Dafa and the atrocities happening in China. Nearly everyone at her work place signed the petition to stop the persecution.

Nothing is Possible Without Master

Peter who is from Germany was involved in editing the German edition of Zhuan Falun. He ran into many difficulties and it was proven time and again that although Master said Dafa disciples were helping him in the Fa rectification, it was Master who made everything possible.

On many occasions Peter could feel that Master was right beside him, and guiding him in completing the project. For example while translating “About Dafa”, he kept receiving hints from Master on the best way to translate it. Once a thought came to his mind that he should examine the translation of a sentence. Miraculously he found that there was indeed a problem with the translated phrase. Guided by Master he completed the task of re-translating the article: “About Dafa”

Ms. Li, Peter, Elena, and Damian formed a team answering phone calls to the Shen Yun ticket hotline in England. Ms. Li participated in this role every year for the past 11 years. Although she ran into many conflicts, it did not matter how wronged she felt, she was able to regard these troubles as opportunities to improve in cultivation. She always answered the phone with a pleasant tone because she knew every person calling was someone predestined to see the show.

Peter joined the ticket hotline team in November 2018. A Shen Yun show was canceled while another show was postponed during this year's UK tour. Peter and other practitioners in the team had to make phone calls to inform people about the changes. He discovered that when he saw things from the customers' perspective, he could dispel their anger and disappointment. A few people even called back afterward to apologize for being rude.

Elena shared how she let go of various attachments, such as her reluctance to give up her comfortable family life, and learned to serve customers with a humble and grateful attitude.

Damian, who worked at least 8 hours daily answering the ticket hotline, talked about how he balanced family life and working on the Shen Yun promotion. He learned that the only way to do this is to cultivate diligently.