(Minghui.org) Falun Gong practitioners were invited to participate in the Mabuhay Philippines Festival on Nathan Phillips Square in Toronto on August 24-25. Many people were attracted by the soothing music while practitioners demonstrated the exercises. Practitioners also gave a dance performance and talked to people about the persecution in China. 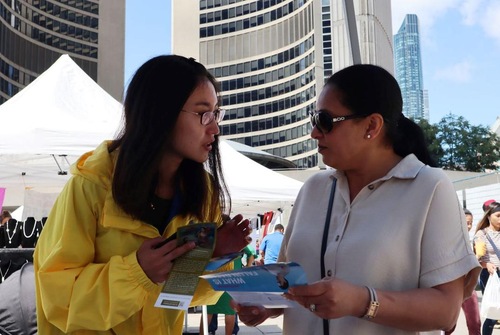 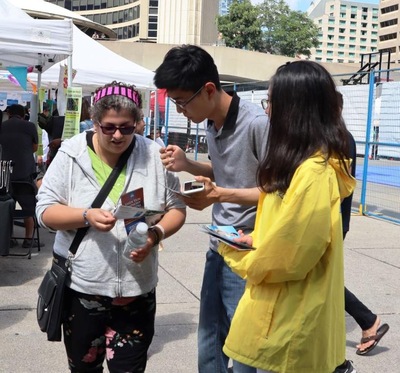 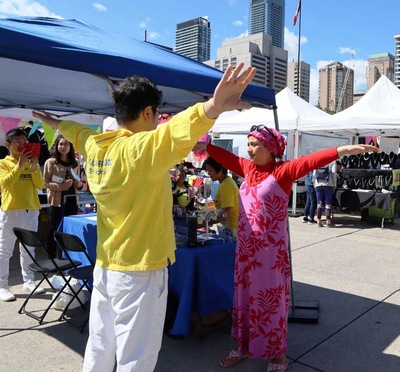 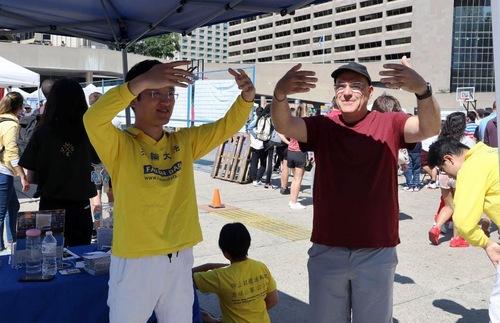 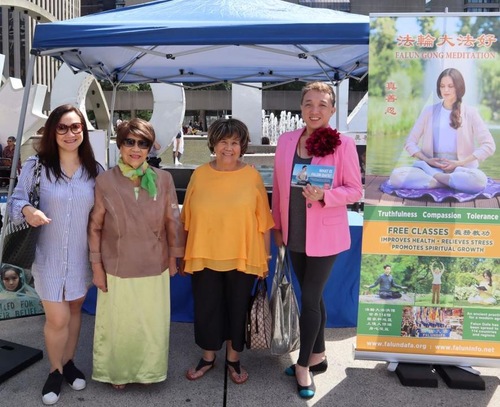 Ms. Norma Carpio (second from left), sponsor and Chairman Emerita for Mabuhay Philippines Festival, has her photo taken at the Falun Gong booth.

Ms. Norma Carpio, sponsor and Chairman Emerita of the Mabuhay Philippines Festival, told practitioners that she was familiar with Falun Gong. She was shocked to learn that the brutal persecution was still going on. She said she would pray for the persecution to end. 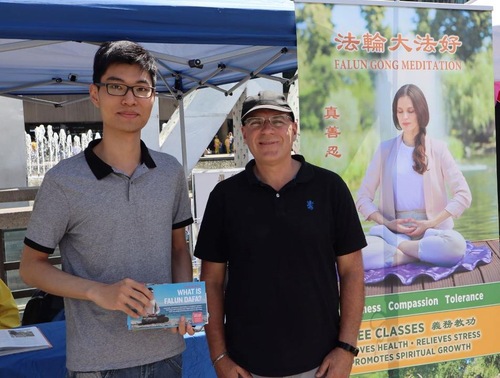 Mr. Ted Fouler, another festival sponsor, learned the third and fourth Falun Gong exercises. He said, “I felt very relaxed when I did the exercises. I know there’s a nine-day workshop, and I’d like to attend.” Mr. Fouler was upset when he learned of the the persecution. He said China's communist regime would surely collapse just like the former Soviet Union did.

Ms. Chen, a lawyer from Dalian City, China, took several photos of the practitioners' dance performance. She said that she had been misled by the Chinese Communist Party's (CCP) propaganda and misunderstood Falun Gong. She decided to quit the Young Pioneers which she joined as a child. 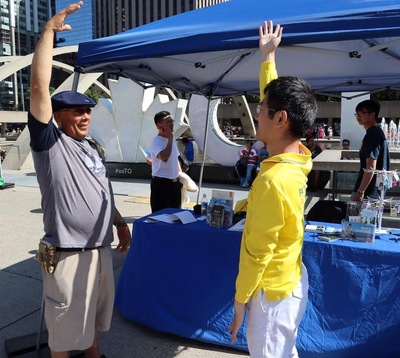 Freddie learns the Falun Gong exercises. He encouraged practitioners to continue their efforts to end the persecution.

Freddie, a local resident, learned the first and third exercises. He said, “I feel very relaxed after doing the exercises. My stress was gone in an instant.” He said of the persecution, “I think it's evil. I heard about it from the news.” He encouraged practitioners' efforts to end the persecution.

Ellie was drawn to the booth by the Art of Zhen-Shan-Ren display. She said that she had seen the art exhibition. “The paintings were created by very talented artists. I can tell they have put a lot of thought into each painting.” She added, “I know about the CCP. They not only persecute Falun Gong practitioners but also sell their organs. Practitioners are very nice, but they have been persecuted terribly!” Ellie said she was very interested in learning the exercises.

“Bing Ji: An Altruistic Chancellor in the Han Dynasty”