(Minghui.org) Falun Dafa practitioners in Florida held the 2019 Florida Falun Dafa Experience Sharing Conference in Orlando on July 20, 2019, the 20th anniversary of their peaceful resistance to the Chinese Communist Party's persecution. Eighteen practitioners talked about what they had experienced while clarifying the truth and improving their cultivation. 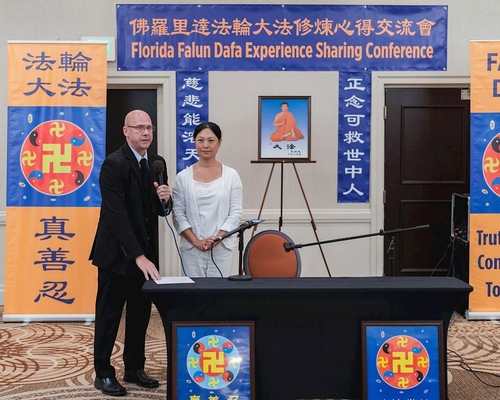 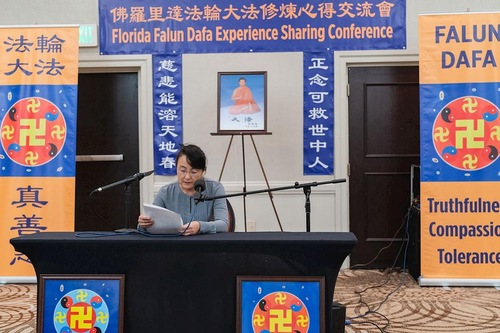 Ms. Zhang Yanling shared her experience of eliminating jealousy, zealotry, grudges, and her attachment to showing off while she promoted Shen Yun Performing Arts. She gave an example, where one time, a coordinator told her that there were extra seats at a Shen Yun promotional meeting, and invited her to join it to “make up the number.” His slip of the tongue hurt Yanling's feeling. She felt upset for days. She looked within for her own problems and found her attachment to her ego and well-hidden jealousy.

Eliminating Attachments to Fame and Fortune 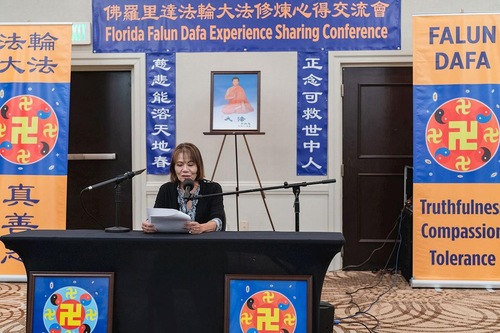 Dr. Von talked about how she eliminated her attachments to achievement and her appearance.

Dr. Von is a doctor of epidemiology with 35 years of experience. She said that her mind was deeply rooted in modern science, and diseases and symptoms. She had always pursued fame and achievement and enthusiastically participated in ballroom dancing, music-related activities, and watching soap operas. After she started cultivating herself according to Falun Dafa, she understood what it meant to be a cultivator. She eliminated many notions and habits that were negatively impacting her cultivation and her attachment to her appearance. She now feels relaxed and calm. Her chronic headache and dizziness have also disappeared. 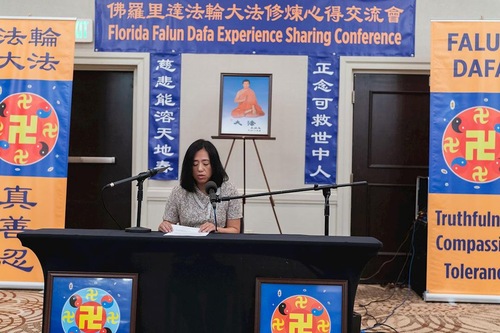 Nancy Xia noticed that people have a deeper understanding of Dafa after watching Shen Yun.

Ms. Nancy Xia previously worked in backstage support for Shen Yun, but she was a reporter for the show for the first time this year. She said the audience members seemed to have a deeper understanding of the show, and she was touched by their comments.

Nancy interviewed a husband and wife in Fort Lauderdale. They told her that after watching the last program, they understood that it symbolized a brand new day and a glorious life! The husband said that Shen Yun wasn't only entertainment, but also spread a message about where we came from and why we are here.

One audience member in West Palm Beach excitedly told Nancy, “This is salvation for earth and people!” Nancy said she felt uplifted listening to the audience feedback. Their happiness made her feel very fortunate to be involved in Shen Yun.

Eliminating Grudges by Looking Within 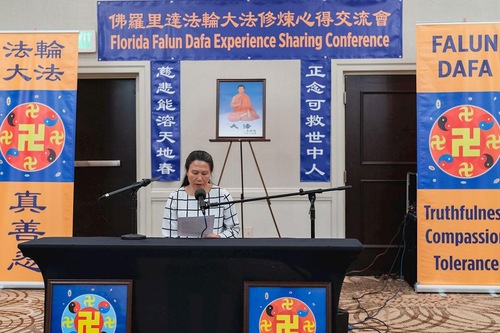 Annie Li talked about how she eliminated attachments.

Annie Li, from Tampa, talked about how she eliminated her grudges against other practitioners. She used to get upset whenever anyone criticized her, whether they were right or wrong. She overcame her grudges through looking within, but she still felt she had room to improve. 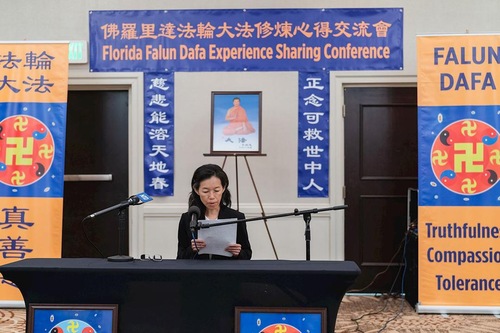 Ms. He Kundai from Tampa shares her understanding of the Fa.

Ms. He Kundai moved from Taiwan to the U.S. for school in 1989. In 1997, a former colleague told her about Falun Dafa and she began practicing.

Kundai said practitioners should not focus on other people's attachments and try to change them. After she examined herself, she realized that whatever attachments she noticed in others were a reflection of her own attachments. The intention behind changing others but not oneself was selfish. Even everyday people are strict with themselves but kind to others. A cultivator should handle things even better. 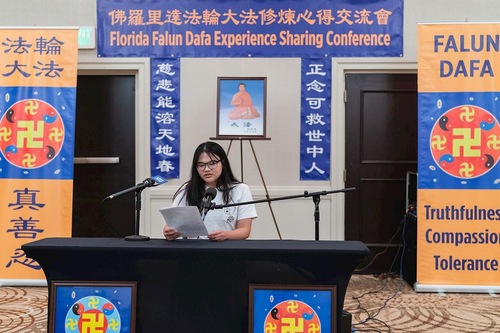 Young practitioner Ms. Li Minyu shared her experience of dissolving karma. Throughout the whole process, she gained a deeper understanding of Master's teachings. She expressed that any discomfort practitioners have was the result of moving energy, not sickness. She experienced several tests on this. All of her “sickness” symptoms finally disappeared after she stayed firm in her belief.

Minyu said she noticed that many practitioners did not immediately negate all manifestations of sickness karma they had. Some practitioners’ tribulations expanded, and some even lost their lives. She understood that cultivation was a serious matter, and “dissolving karma” couldn't be used as an excuse to hide one's attachment or failure to look within. 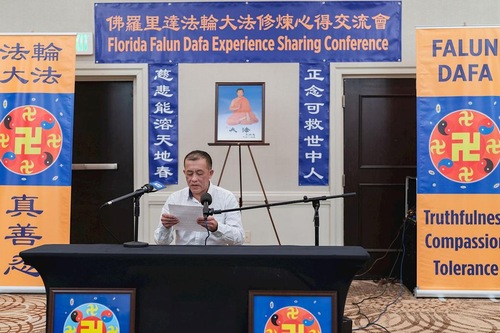 Mr. Nhut Nguyen from Orlando began practicing last year. He used to wonder why over 100 million people around the world practiced Falun Dafa. He watched an introduction to Falun Dafa video on YouTube and read the book Zhuan Falun online. He even learned the five exercises from YouTube videos. Nhut later found local practitioners and began attending the group exercises at a park.

After practicing Falun Dafa, Nhut learned to let go of his attachments, and he consequently became healthy. He felt more enlightened and he no longer experienced dizziness. He is very thankful to Master for saving people and introducing Falun Dafa to the world.

Saved from a Car Accident 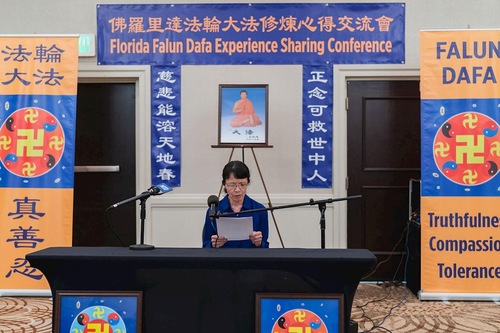 Ms. Liang Akang from mid-Florida talked about how she was protected from having a car accident soon after she started practicing. She said, “I felt a rotating Falun (law wheel) in my abdomen even before I finished reading the First Talk of Zhuan Falun. One day, I was driving down the highway at 75 miles per hour when I noticed a huge tire in the middle of the road. I was too close to it and didn't have time to step on the brake. Another car was in the next lane so I couldn't swerve out of the way. I cried in panic, 'Master, please save me!' In a fraction of a second, my car quickly went around the tire and returned to my lane. I know it would have been a terrible accident if Master hadn't protected me!”

Breaking Through Difficulties by Exchanging Experiences 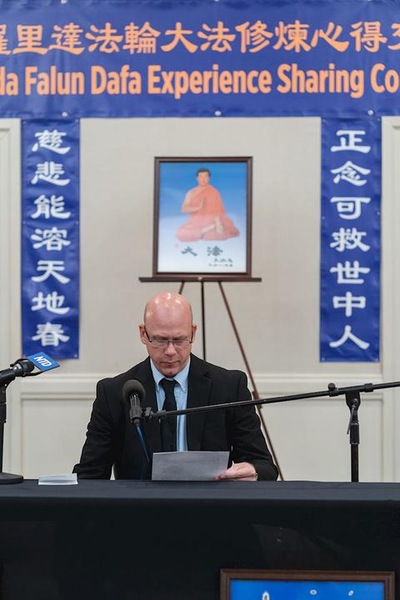 Mr. Nick Shweda began practicing Falun Dafa in 1998. He attended Master's lectures in New York and Toronto. He discussed his understanding of the benefits of experience sharing.

Mr. Vincent Ragsdale said during his speech that he studied the Fa, did the exercises, and sent forth righteous thoughts on time every day. He also incorporated truth-clarification activities in his daily life.

Vincent said he incorporates the principles of Truthfulness-Compassion-Forbearance in his life and eliminates bad thoughts. He realized how important it is to believe in Master and Dafa, and that Master constantly protects his disciples. 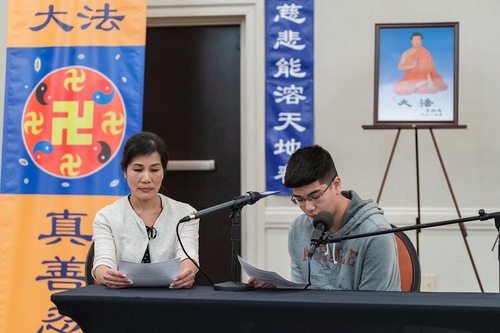 Mrs. Kaitie Tran and her son talk about their cultivation experiences.

Mrs. Kaitie Tran's husband, daughter, and two sons began practicing Falun Dafa before she did. By following Truthfulness-Compassion-Forbearance, her 19-year-old son eliminated his attachment to comfort. A fellow practitioner noticed his great writing skills and encouraged him to write for the Epoch Times. He applied for an internship and hopes to use this opportunity to help save more sentient beings. He sends righteous thoughts early in the morning, does the exercises with his mother every day, and studies the Fa teachings with his younger brother in the evenings.