(Minghui.org) Falun Gong practitioners from across Europe held a rally, march and candlelight vigil in Berlin on August 10, 2019. Three members of the Bundestag – the German Federal Parliament – sent letters to the rally condemning the Chinese Communist Party’s (CCP) persecution of the practice, and commending Falun Gong practitioners’ perseverance in peacefully protesting the persecution over the past 20 years.

Spokesperson for Human Rights Committee for the Christian Democratic Union (CDU): “We Work Together.” 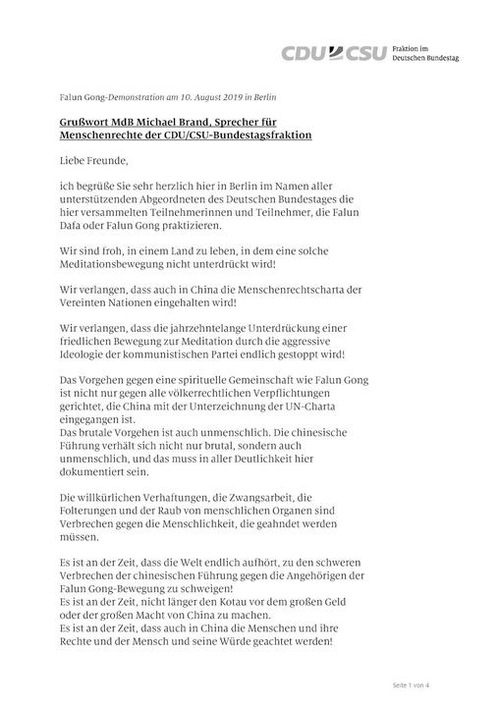 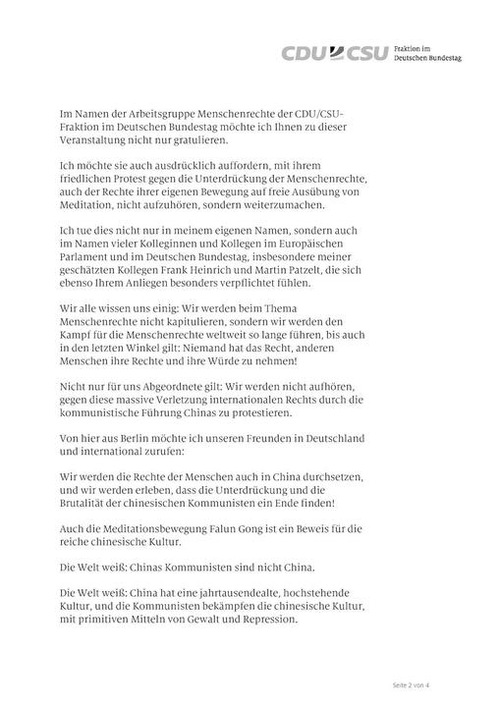 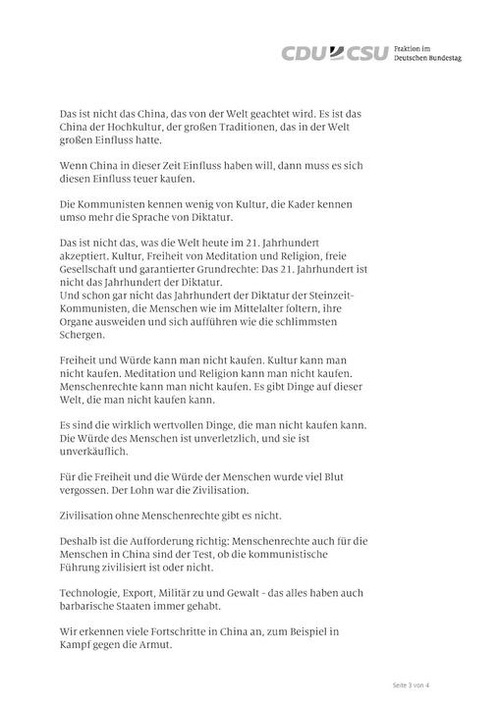 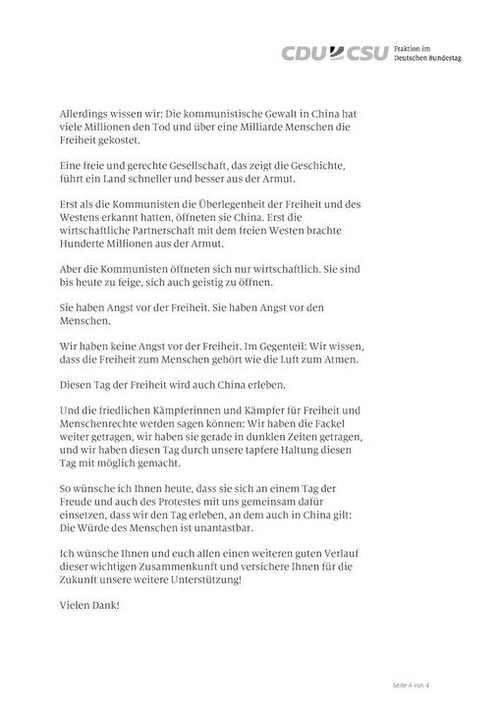 Letter from Michael Brand, spokesperson for the CDU's Committee on Human Rights and Humanitarian Aid

Michael Brand, spokesperson for the Committee on Human Rights and Humanitarian Aid of the Christian Democratic Union of Germany (CDU), extended a welcome to the practitioners on behalf of all members of the Bundestag who support Falun Gong.

In the letter, Mr. Brand strongly condemned the CCP’s persecution of Falun Gong: “The communist ideology that advocates violence has oppressed this peaceful meditation movement for decades, and we demand that this persecution be stopped!

“China has signed the ‘UN Charter.’ Treating a group of believers like Falun Gong not only violates the adherence to international law, but this cruel practice [of persecution] is also inhuman. The actions by the Chinese leaders are not only cruel, but also inhumane. This must be absolutely documented.

“Arrest, forced labor, torture and organ harvesting from living practitioners are all crimes against humanity and must be punished.

“The world can no longer be silent concerning the Chinese leaders’ crimes against Falun Gong practitioners!"

Mr. Brand encouraged Falun Gong practitioners to continue their peaceful protests. He stated in the letter, “I also want to unequivocally ask you to resist the violation of human rights, insist on your right to meditate, and not stop.

“We will enforce human rights in China, and we will experience that the suppression and brutality committed by the Chinese communist will end.

“The entire world knows that the CCP is not China.

“The world knows that China has a history of thousands of years, and a divinely inspired culture. Yet, the Communist Party fights against the Chinese culture with primitive means, such as violence and suppression.”

Before closing, Mr. Brand said that he would work alongside Falun Gong practitioners until the persecution ends. “People who struggle for peace and human rights will say: 'We carried the torch during the darkest hour, and we made it possible for this day to arrive.'

“Therefore, I hope that we will protest as one body to witness the day when human rights are inviolable in China.

“I wish you and all others involved continued success during such important forums and be assured that you have our continued support.” 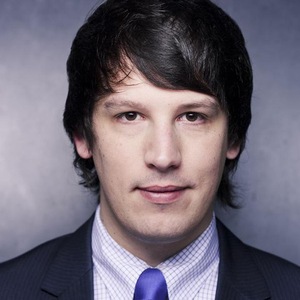 Andreas Bleck of the Alternative for Germany (AfD) Party, Member of the Bundestag since 2017 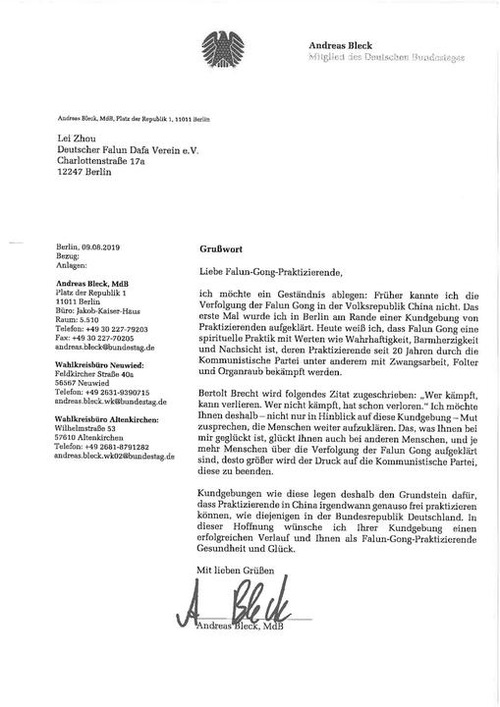 Letter from Andreas Bleck of AfD

Andreas Bleck of the Alternative for Germany Party, a Member of the Bundestag, stated in his letter, “Now, I understand that Falun Gong is a spiritual practice whose adherents follow the principles of Truthfulness, Compassion and Forbearance. Its adherents have been persecuted by the Communist Party for 20 years, and they have been subjected to forced labor, torture and organ harvesting.

“I hope to give you the courage to continue clarifying the truth, but not only during this rally. Your truth clarification was successful when it comes to me personally, and I am sure that it will achieve the same result when you talk to others. The more people know the truth about Falun Gong, the greater the pressure on the Communist Party to stop the persecution.

“Demonstrations such as this lay the cornerstone for practitioners in mainland China, to practice freely, just like their compatriots in Germany. With this hope, I wish success for your rallies. We also wish all Falun Gong practitioners good health and good luck.”

Member of Bundestag: May Chinese People Have a Peaceful and Free Future 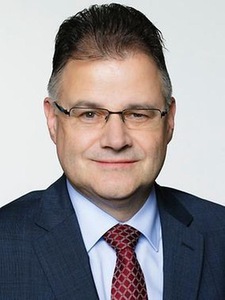 Juergen Braun of AfD, a Member of the Bundestag 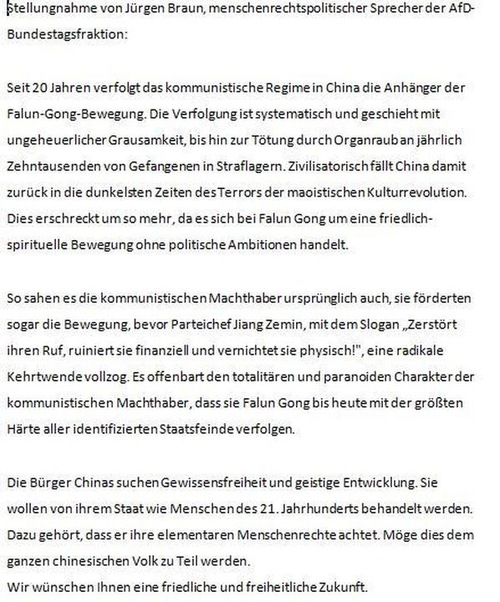 Juergen Braun of the Alternative for Germany Party, a member of the German Bundestag, stated in his letter, “It has been 20 years since the communist regime has persecuted Falun Gong adherents. The persecution is systemic, and perpetrated cruelly, which includes the killing for organs from tens of thousands of imprisoned Falun Gong practitioners. When seen from a civilization perspective, China has regressed to the darkest period of the Cultural Revolution. What is even more terrifying is that the Falun Gong practitioners they persecute belong to a peaceful movement without any political ambitions.”

Mr. Braun pointed out that in fact, the communist rulers were aware of this from the very beginning. Before Jiang Zemin directed the persecution policy on Falun Gong (“Ruin their reputations, bankrupt them financially, and destroy them physically”) the CCP actually supported this movement. Braun believes that this about-face reveals the totalitarian and paranoid character of the communist rulers, as they use the most severe means of dealing with what they believe to be the country’s enemies when persecuting Falun Gong.

He stated, “The Chinese people are looking for freedom of conscience and spiritual development. They ask for no more than being treated as people living in the 21st century. This also includes respect for basic human rights. May all Chinese people enjoy a peaceful future without persecution.”

“New Practitioner: Dreams Gave Me Insights into Fa-rectification and Tribulations”