(Minghui.org) With the advent of summer, tourists are increasingly visiting London. Falun Dafa practitioners set up a table in London's Chinatown to introduce this ancient Chinese meditation practice and to raise awareness of the persecution of Falun Dafa (also called Falun Gong) in China. Many visitors have been stopping by the table to learn more about Falun Dafa and the situation in China. A large number of people have also signed a petition calling for an end to the persecution. The weekend of June 1, 2019, was no exception. 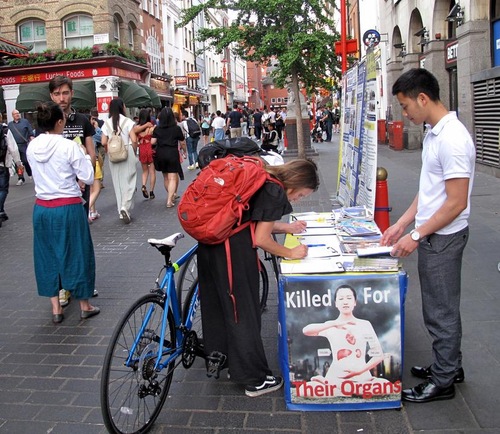 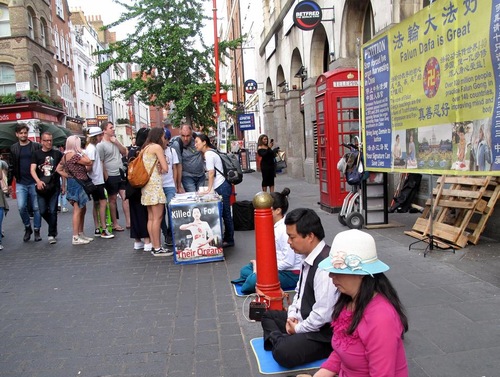 Belgian Family: The Suppression Is Beyond Imagination

Xanthippe from Belgium said she had a strong interest in ancient Asian culture and that she had also practiced and taught meditation for 20 years. When she visited Chinatown on June 1 with her family, she was shocked by the severe nature of the persecution experienced by Falun Dafa practitioners in China. She signed the petition hoping to bring an end to the human rights violations and accepted informational materials from a practitioner, including the latest issue of Minghui International.

Xanthippe noted that the persecution targets basic humanity and said, “I'm speechless. Because the brutality is so disturbing that it is beyond imagination.” She said it is wrong for people to harm each other. “When people do that, they are also hurting themselves. So let's be nice to each other,” she remarked.

Xanthippe also agrees with Falun Dafa's principles of Truthfulness-Compassion-Forbearance. “This is my belief also,” she affirmed. 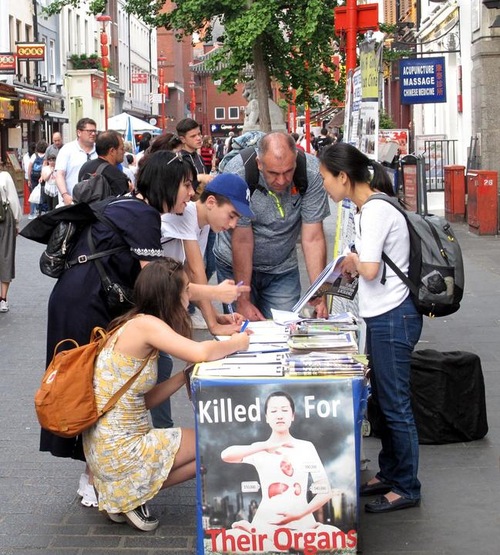 A family of four signs the petition calling for an end to the persecution in China.

An Israeli family of four saw the posters displayed by Falun Dafa practitioners and became interested in learning more about this cultivation practice. A practitioner talked to them about Dafa and gave them a copy of Compassion magazine, published by the Falun Dafa Information Center. Everyone in the family showed their support for Dafa by signing the petition.

The mother had encountered a Falun Dafa event last year in Taiwan. She appreciated what she saw, and read more about Falun Dafa on the internet after returning to Israel.

Her daughter, a high school student, was very interested in meditation and asked a practitioner numerous questions. She wanted to know what is special about the exercises, and whether she could do them by herself. Upon leaving, the young woman was excited about learning more and said she would give the Dafa exercises a try.

Martial Arts Practitioner: This Is Truth

Steward, an employee of the British Automobile Association, came to Chinatown for a meal with his friends. Impressed by the practitioners' group meditation, he approached them and wanted to learn more.

Having practiced Taekwondo and other martial arts years ago, Steward was curious to learn more about this ancient cultivation practice. He was glad to hear that Falun Dafa always offers the teachings free of charge and that people can download the Dafa exercise instruction from the internet. He said, “It's great. This must be the truth.” He also encouraged practitioners to keep up their efforts to end the persecution.