(Minghui.org) Today's news from China includes incidents of persecution that took place in 13 cities or counties in 8 provinces, where at least 27 practitioners were recently persecuted for their belief.. 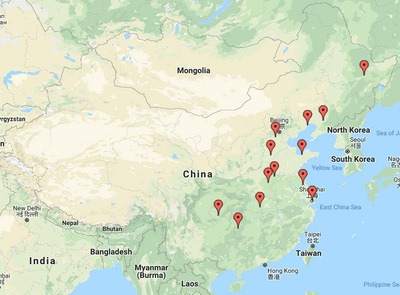 Ms. Qin Yaling was arrested by officers including Wang Xudong and Xiao Shunyong on May 7, 2019. She was held at Liaoyang City Detention Center. Her arrest was recently approved by the Wensheng District Procuratorate of Liaoyang City.

Ms. Zhao Jin was detained at a mental health hospital. She was monitored 24 hours a day even when she used the toilet.

Ms. Jia Lanzhen was arrested by officers including captain Zhang Mengkan (张孟侃) from the Guangzong County Domestic Security Division on April 11, 2019. The police confiscated more than 2,000 yuan, four cell phones, and one computer. Ms. Jia was held at the Xingtai No. 1 Detention Center for one month and released on May 12, 2019.

Mr. Zhang Shaoquan was arrested at home by plainclothes officers from the Jincheng Police Station on May 22, 2019. The police ransacked his home and confiscated computers and printers. He is currently held at the Laizhou Detention Center.

Ms. Liu Yanhua, from Chuanhui District, was arrested and taken to the Zhoukou City Detention Center on April 17, 2019. Her case was brought to a Procuratorate, which rejected it due to lack of evidence on May 22.

In the first half of 2019, Mr. Feng and Mr. Han were placed on trial and each were sentenced to a three-year prison term. They are currently detained at the Zhengzhou Prison.

Ms. Shen Huanjiao was arrested at the Wuhan subway station on October 26, 2018. She was held at the Qianjiang Detention Center. In April 2019, her case was brought to the Xiantao City Procuratorate.

Ms. He Xiuyun and Ms. Yang Linying were arrested by plainclothes officers from a domestic security division on May 23, 2019, for distributing informational materials about the persecution of Falun Gong. They are currently held at the Guangchang Police Station.

Ms. Ji Xiuhui was arrested by officers from the Guxi Town Police Station on April 22, 2019. The police confiscated a laptop, a printer, Falun Gong books, informational materials about the persecution of Falun Gong, and other personal items. Her whereabouts are unknown.