(Minghui.org) The United States Department of State released its 2018 Annual Report on International Religious Freedom on the afternoon of June 21, 2019. As in previous years, the report lists China as a “Country of Particular Concern” (CPC) under the International Religious Freedom Act of 1998 for having engaged in or tolerated particularly severe violations of religious freedom. 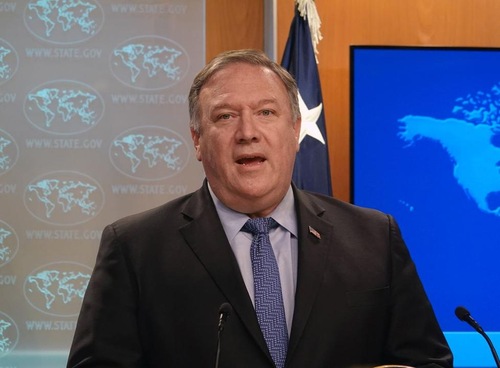 Secretary of State Mike R. Pompeo at the press release of the 2018 annual report on International Religious Freedom

Secretary of State Mike R. Pompeo said at the press release, “I’m proud to be here today to speak about the State Department’s ongoing mission to advance international religious freedom.”

“This mission is not just a Trump administration priority – it’s a deeply personal one. For many years, I was a Sunday school teacher and a deacon at my church.” 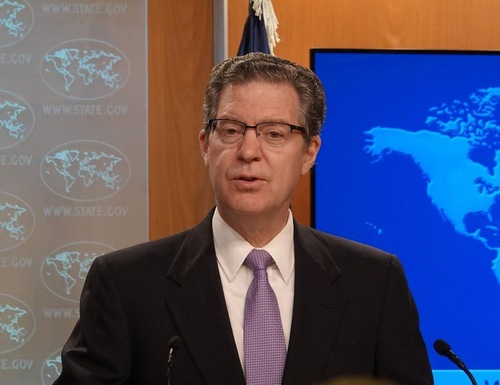 United States Ambassador-at-Large for International Religious Freedom Sam Brownback said, “China has declared war on faith. We’ve seen increasing Chinese Government abuse of believers of nearly all faiths and from all parts of the mainland.”

He condemned the CCP's state-sanctioned organ harvesting from living prisoners of conscience, including Falun Gong, Uighurs, Tibetan Buddhists, and underground Christians, adding that the atrocity should shock everyone’s conscience.

Brownback said to the Chinese communist regime, “Do not be mistaken, you will not win your war on faith. This will have consequences on your standing at home and around the world.”

The Annual Report states, “Prior to the [Chinese] government’s 1999 ban on Falun Gong, the government estimated there were 70 million adherents. Falun Gong sources estimate that tens of millions continue to practice privately, and Freedom House estimates 7-20 million practitioners.”

In describing cases of Chinese authorities “subjecting individuals to death, forced disappearances, and organ harvesting in prison because of their religious beliefs or affiliation,” the report refers to a case published on Minghui.org of Ye Guohua, who was arrested and tortured for doing Falun Gong exercises. Three days before Ye died in police custody, his family “reported Ye was in a coma and his body was swollen.” When another practitioner inquired about the cause of his death, detention center staff said, “He’s dead, so there’s nothing that can be done. Asking about this is just asking for trouble.”

The report also includes another case identified on Minghui: “On July 4, authorities arrested and detained Ma Guilan from Hebei Province for talking to people about Falun Gong. On September 17, authorities said Ma suddenly fell ill and they took her to the hospital where she died hours later. According to the report, several officials came to the hospital and removed Ma’s organs for examination, although it was unclear what happened to those organs.”

Falun Gong practitioners detained in China are subjected to various methods of physical and psychological torture, such as sleep deprivation, in an attempt to force them to renounce their belief.

The report cites figures from Minghui that the authorities harassed 4,127 practitioners and arrested 4,848, among whom 2,414 remained in detention at year’s end.

Expanding on the Chinese regime’s killing for organs, the report continues, “The Wall Street Journal reported that Chinese authorities have subjected prisoners of conscience including Falun Gong, Uighurs, Tibetan Buddhists, and 'underground' Christians to forcible organ extraction. Former prisoners stated that while in detention, authorities subjected them to blood tests and unusual medical examinations that were then added to a database, enabling on-demand organ transplants.”

“On December 10, an independent tribunal established by the international NGO International Coalition to End Transplant Abuse in China issued an interim judgement that the panel was 'certain – unanimously, and sure beyond reasonable doubt – that in China, forced organ harvesting from prisoners of conscience has been practiced for a substantial period of time, involving a very substantial number of victims.'”

“The Globe and Mail reported in September that authorities tortured a Canadian citizen who is a Falun Gong practitioner during her 18-month pretrial detention in Beijing. While detained, authorities reportedly initially deprived the individual of food and water, and later pushed her to the ground and pepper sprayed her. Officials arrested her in February 2017 on charges of 'organizing or using a cult to undermine implementation of the law.' After the arrest, her husband, whom she stated she believed turned her in to authorities, reportedly transferred all of her property and company shares to his name.”

The report states, “The whereabouts of Gao Zhisheng remained unknown, although media reported it was believed he remained in the custody of state security police. Police detained Gao, a human rights lawyer who had defended members of Christian groups, Falun Gong practitioners, and other groups, in September 2017.”

The annual report records the persecution of Falun Gong and other beliefs around the world from January 1 to December 31, 2018. The report will be submitted to the United States Congress.

“Nuremberg, Germany: We Must Speak Up to Stop the Persecution”