Denmark: Introducing Falun Gong at the Folkemøde in Bornholm

(Minghui.org) Falun Gong practitioners from Denmark and Sweden participated in the annual Folkemøde (People's Democratic Festival) held in Bornholm on June 13-16. The festival gives Danish politicians an opportunity to meet with their constituents and to debate current political issues.

Practitioners introduced the ancient spiritual practice and informed people of the 20-year-long persecution in China.

They also screened a documentary on the persecution, Free China: The Courage to Believe, and passed out informational materials. 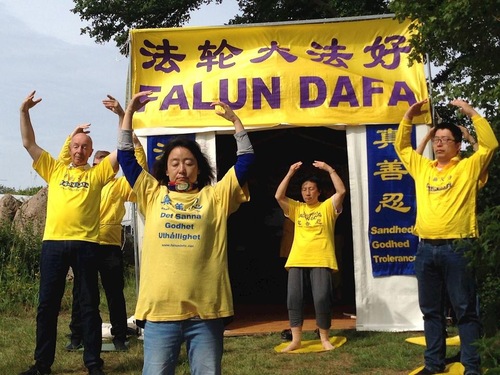 Practitioners demonstrate the exercises during the annual Folkemøde on June 13-16 in Bornholm. 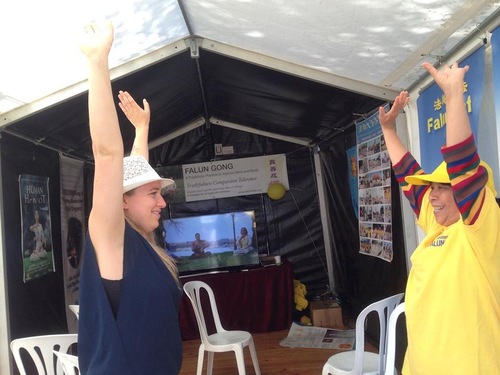 A visitor (left) learns the exercises.

Many people were interested in the calming exercise movements and pleased to find out that the practice was free to learn.

After three high school students learned the five exercises, they said they felt much more relaxed. When they heard about the guiding principles of Falun Gong, which are Truthfulness-Compassion-Forbearance, they said they would write a report and give a presentation about the practice at school. They said encountering Falun Gong was the most significant thing they'd encountered during the festival and asked practitioners several questions. 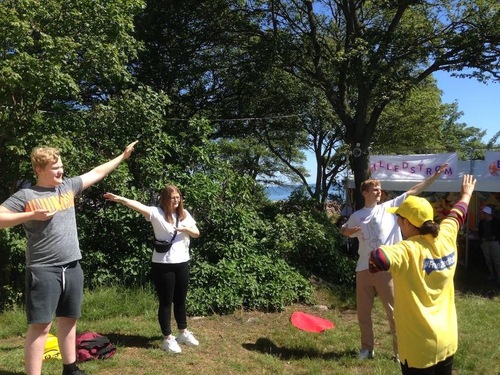 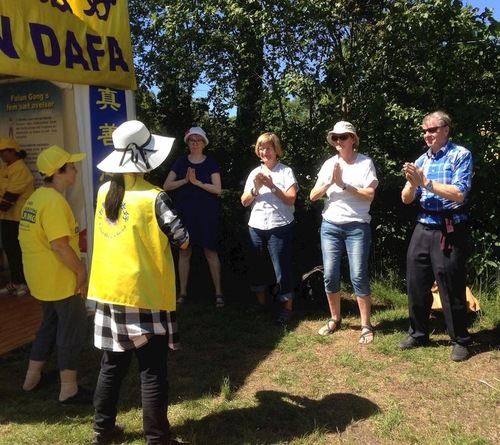 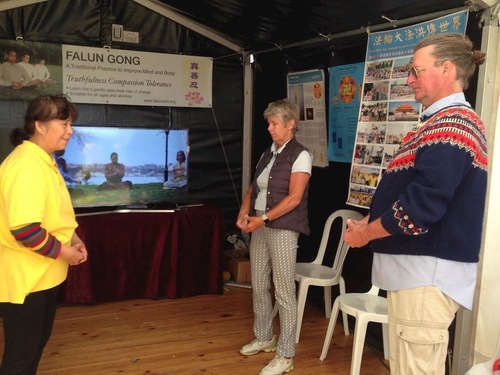 Frederik said that he'd always been interested in meditation. After he did the exercises, he was amazed by the strong energy he felt and said he would go to the local exercise site in Copenhagen.

After a woman from Copenhagen learned the exercises, she said, “My fatigue is gone! My thoughts are clear and I feel relaxed. I will come back and do the exercises again.” She said that she'd seen Falun Gong practitioners holding events in Copenhagen and knew that practitioners were kind, peaceful, and rational people who follow the principles of Truthfulness-Compassion-Forbearance.

He added, “I felt bad. It was horrible and scary. I support you. China's inhuman persecution must be stopped.”

Many people said they'd heard about the persecution. One woman said that a friend had told her about it. “My friend told me that Falun Gong is peaceful but that it is persecuted in China.” She sighed. “Practitioners believe in Truthfulness-Compassion-Forbearance. How can such good people be persecuted! I support your peaceful resistance.”

“Young Woman's Pursuit of Success Transformed into a Mission of Kindness”