Young Woman's Pursuit of Success Transformed into a Mission of Kindness

(Minghui.org) Twenty-year-old Yating Xu dreamed about owning a restaurant. She said, “I like cooking and wanted to open a restaurant. At university I took a class called 'Creation and Thoughts,' which I hoped would inspire me.”

The teacher introduced Falun Dafa to the students. This expanded Yating's view of the world and the cosmos. Although she always wondered why we are here, she didn't know anything about cultivation.

“I was very busy and I was involved in many school activities. I also worked part-time at two restaurants. I had a music group and we won an award during a competition in Taipei. I was extremely busy and only thought of pursuing my dreams.”

However, circumstances offered her an opportunity to practice Falun Dafa.

“One day I had acute gastroenteritis. I couldn't eat anything and kept vomiting and had diarrhea. I saw the doctor twice but it wouldn't stop. I even vomited out the medicine I took. I was exhausted, but I still had to work and attend classes. It seemed hopeless. A Falun Dafa practitioner suggested that I repeat 'Falun Dafa is good and Truthfulness-Compassion-Forbearance is good.'”

Yating didn't believe it. She didn't think saying a few words would help her recover from the illness that the doctor was unable to cure.

“I lay in bed and had no strength. I felt helpless. I thought, “Maybe I'll just say it and see if it works. So I said, 'Falun Dafa is good and Truthfulness-Compassion-Forbearance is good' twice.” An amazing thing happened. My illness was gone! I felt comfortable. I was so surprised that I immediately told my roommates. Although they didn't believe it, I knew it worked!”

She realized that Falun Dafa was extraordinary, and she started to practice. 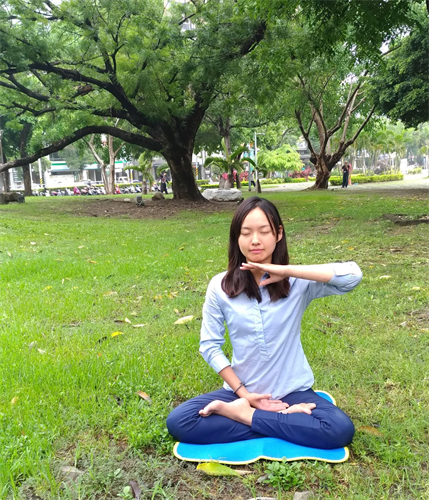 “I began going to the park to do the exercises with other practitioners in the morning and attended the group Fa study. I joined the Falun Dafa club at my university and promoted Falun Dafa to other students. I started to require of myself to behave according to the principles of Truthfulness-Compassion-Forbearance. I no longer competed with others and I stopped my involvement with extracurricular activities. My family and friends couldn't understand.”

University life is challenging and full of temptation. How should a practitioner behave? Yating was puzzled. “I know Falun Dafa teaches people to be good. It was a big test to me when my friends and family didn't understand it.”

“My parents fiercely opposed me practicing Falun Dafa and confronted me one day. I went to see a practitioner who was manning the Zhen, Shan, Ren Art Exhibition. I told her everything I was encountering at home. She said,'We are cultivators and can manage everything as long as we comply with the principles of Truthfulness-Compassion-Forbearance.'”

The practitioner's compassion comforted Yating and she calmed down. She examined herself for her attachments and told herself that she must abide by Dafa's principles and face all tests calmly and with compassion.

“My parents didn't know what Dafa was and listened to the lies the CCP spread so they opposed my practicing. I believed that as long as I behaved according to the Fa principles, they would understand. They just needed time to learn the truth. It's not easy to balance family life. My parents have observed my positive changes and my perseverance in the past few years. My father finally said that he believed his daughter hadn't changed for the worse and he supported my decision to practice.”

As she understood the Fa more, Yating realized that Master never asked that practitioners to let go of all material things and to become like a monk or a nun. The things one needs to let go of are their attachments.

“I used to be very competitive. I always tried to come out on top and show people that I was capable. I yearned for other people's praise. I was very sad if I didn't achieve my goals. After I started to practice Falun Dafa, I realized that if I only pursued fame and self interest, I would eventually feel lost or empty no matter how much I achieved.”

Yating found that when she let go of her attachment to fame and personal interests, she felt at ease when encountering the prospect of loss.

After she graduated, Yating was offered a job at a restaurant preparing Mediterranean food after she graduated from the university. The owner required his chefs to know the ingredients and the cooking really well and also learn the cultural background behind each dish. Yating hoped to learn the techniques from her boss, but things didn't go as well as she hoped.

“In the beginning, my boss said that I could serve the clients outside or work in the kitchen. But after two years I was never offered a chance to work in the kitchen. Seeing how my co-workers were learning a lot, I became anxious and even lost my temper with my boss. But when I looked at it from a cultivator's perspective, I realized that maybe it was arranged that way. If I was supposed to work in the kitchen, I would. If that was not arranged for me, I would not be offered the chance no matter how hard I fought for it.

“We believe in letting things happen naturally. We know that we won’t be deprived of what is rightfully ours, and shouldn’t labor to get what is not.” (The Seventh Talk, Zhuan Falun)

Eventually I didn't care where I worked. Although I wanted to be a chef, I felt that it was still good to serve the customers.”

“When I really let go of my attachment and served every customer well, they were really impressed by my kindness. It became my mission.”

My boss is also a Falun Dafa practitioner. He's part of the Shen Yun promotion team and hoped that his staff would join him in promoting Shen Yun to his customers.

“We young people are not familiar with the traditional culture. When I heard the soprano sing the song, “Plum Blossom” a few years ago, I realized that our generation lost perseverance like the plum which blossoms in winter. It was because we no longer have a traditional culture background.”

“Most of the performers in the Shen Yun show are as young as I am or even younger and they perform all over the world to promote Chinese traditional culture. They don't complain about hardship. I, however, often complain about working long hours. Watching Shen Yun taught me how to face hardship so that I could have the determination to bloom, just like the plum blossoms.”

Yating began working at the Teppanyaki Restaurant of Hanlai Hotel doing customer service in August 2018. By the end of the year she became a team leader. 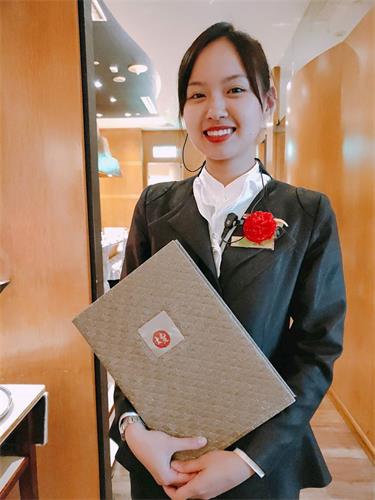 A team leader in customer service

Following the Principles of Truthfulness-Compassion-Forbearance in Dealing with Conflicts

After she became a team leader things did not always go smoothly. Yating said, “Practicing Falun Dafa has helped me so much! I feel calm despite the difficulties. Master said, 'I would say physical pain is much easier to bear, as you can simply tough it out. It’s much harder to take it when someone is scheming against you.' (The Fourth Talk, Zhuan Falun) When I came across conflicts, I looked within. When I found my attachments, the conflicts instantly dissolved. I treat every client and colleague with compassion. Now they think well of Falun Dafa.”

“Denmark: Introducing Falun Gong at the Folkemøde in Bornholm”