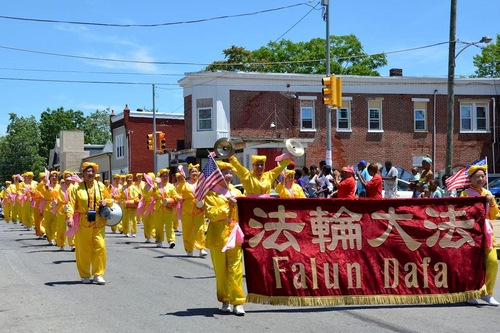 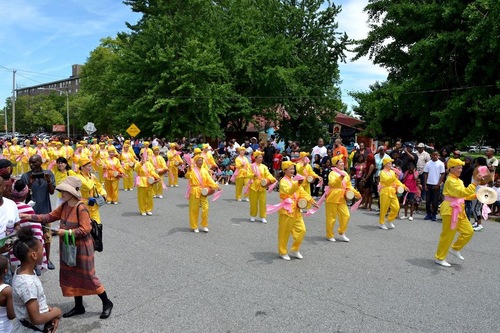 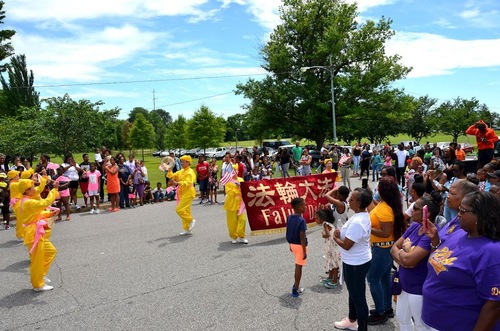 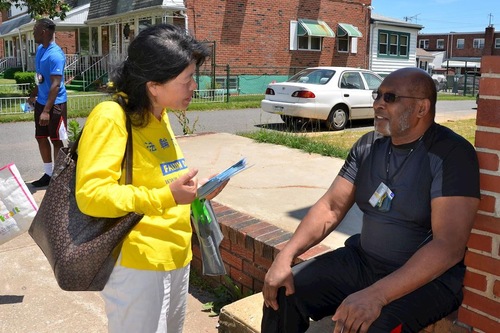 A practitioner distributing flyers talks with a local resident

It was the first time the city has ever held a Father's Day Parade and Falun Gong practitioners were invited to participate. The Falun Gong drum team consisted of more than 30 practitioners and was the only Asian group in the parade. Their eye-catching yellow costumes and bright smiles resonated with the audience. Many people applauded and took photos. 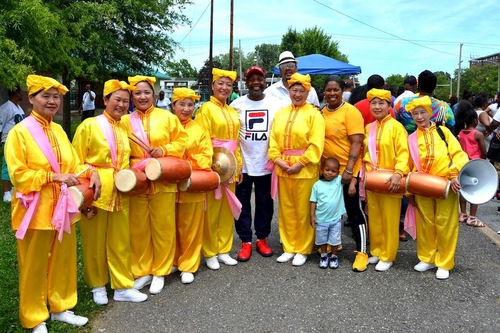 “You made history today!” parade organizer Tiffany Harris said. “It is the first time Chinese have participated in a parade in this historic city.”

She said she saw the waist drum team in another city and was so touched she wanted to invite them to Chester. She hoped they would come again next year.

Mayor Thaddeus Kirkland said the purpose of the parade is to bring the community together and learn from each other. He commended the waist drum team: “They are very unique and very talented. Their costumes and the Chinese culture they show are very popular, both with children and adults. I recorded it on my mobile phone.” 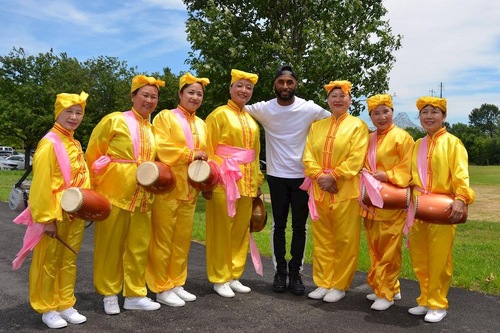 Deputy Mayor William Morgan takes a group photo with some of the waist drum team members.

Deputy Mayor William Morgan also liked the waist drum team. “Their yellow costumes are particularly eye-catching,” he said. “There were other bands and instruments in today's parade, but their drums are unique. Many people had never seen it before. I saw it for the first time, too.”

He thanked the practitioners for sharing a bit of Chinese culture with their city and giving the local community the opportunity to appreciate it. He said many people took videos of the parade and there would be a lot of videos about the waist drum team on social media the following day. 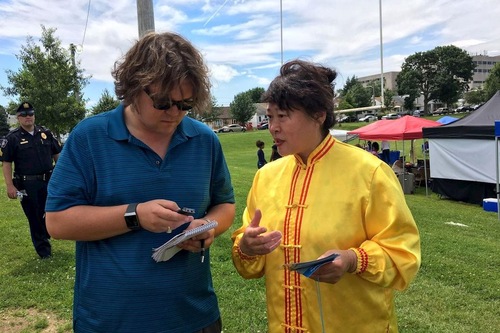 A reporter from the Delaware County Daily Times interviews a practitioner.

A reporter from the Delaware County Daily Times interviewed a practitioner after the event. His report on the parade featured a picture of the waist drum team as the top photo and said, in part, “The city’s search efforts brought a 35-member traditional Chinese waist drum team from the Flushing neighborhood of Queens, N.Y., representing the Chinese spiritual practice Falun Dafa.”

Chester is a half hour drive west of Philadelphia. The city was established in 1682 and has a population of more than 30,000 people.

“Man in His 60s Tortured in Hebei Prison”

“Tongcheng County, Hubei Province: Two Women Die after Being Persecuted for Their Faith”