(Minghui.org) Mr. Liu Deyu, a Falun Gong practitioner in his 60s from Jingmen City, Hubei Province, has been held in Fanjiatai Prison since October 29, 2018. He refuses to wear the prison uniform or cut his hair in the prisoner's style to protest his illegal detention. He has been tortured and is emaciated.

At one point, the guards did not allow him to sleep for three days and nights. They beat him when he closed his eyes.

He was also forced to “dig the wall” for a long time. That meant he had to lean his head against a wall while keeping his upper body perpendicular to his lower body and his feet three feet from the wall.

He was denied use of the toilet for a long time and was not allowed to call his family.

To try to force him to give up this belief, the guards ordered collaborators to insult Master Li, the founder of Falun Gong, and insult his relatives and family members. They also tried to brainwash him by forcing him to listen to the Chinese Communist Party (CCP) propaganda.

To protest, Mr. Liu went on a hunger strike. The guards tied him to a bed and inserted a plastic tube into this stomach through a nostril to force-feed him. He was tortured this way for over a month. 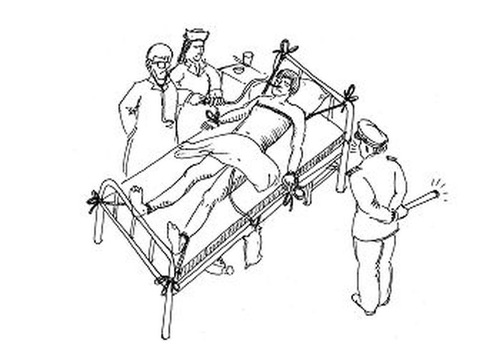 Torture illustration: Tied to a bed for force-feeding

Because Mr. Liu firmly refused to give up his belief, the collaborators forced him to drink his urine. He is emaciated.

Mr. Liu has a college degree and was employed by the Jingmen City Anti-epidemic Station. When the CCP began persecuting Falun Gong on July 20, 1999, he was sent to a forced labor camp for three years. He was forced to undergo brainwashing and subjected to all kinds of humiliation and torture.

He was arrested in December 2016 for distributing informational materials about Falun Gong. He was tried and sentenced to a five-year prison term in the Dongbao District Court on May 2, 2017. He was transferred to Fanjiatai Prison on October 29, 2018.