(Minghui.org) In November of 2018, my neighbor brought me a wooden three-wheeled cart, some heavy wooden planks and a chainsaw, asking me to help cut the wood into small pieces for use as firewood in winter.

I had plugged in the power cable and was about to commence sawing when I realized I had placed the stationary saw too close to my window. Putting down the piece of wood, I absently stretched out my left hand in an attempt to move the saw further from me. However I had forgotten that the saw was still running. Instantly, the saw cut through the index finger of my left hand! I quickly removed my gloves and saw that my finger was almost completely severed from my hand, connected only by a small bridge of flesh and skin. The base of my forefinger was so deeply cut that I could see white bone peeking through the gaping wound.

My first thought was to remove what remained of my finger, throw it away and be done with it. However my next thought gave me pause. “I am a Dafa cultivator under Master’s protection. My finger will most certainly recover.” I thought of Master’s teaching, “Whatever you experience during your cultivation—whether good or bad—is good, for it comes about only because you are cultivating.” (“To the Chicago Fa Conference,” The Essentials of Diligent Progress Vol. III)

Master’s teaching reinforced my decision. This accident should be considered a good thing, as I could use it to demonstrate the supernormal abilities and protection Master extends to practitioners, as well as correct public misconception as to why Dafa practitioners insist on not going to hospitals for treatment.

I gently pressed the pieces of my severed finger in place, before wrapping it in toilet paper. Blood continued to well out from my wounds and I had to change my toilet paper bandage at least three times. Worried that the wound would not heal properly, I decided to bandage my middle finger to my injured forefinger, so as to provide more support. While changing the dressings, a single thought came to mind. I have to cherish this finger as I need it to validate the Fa! Immediately blood stopped pouring from my wound.

That afternoon, I attended my usual group Fa study session and felt little to no pain. That night, I had a dream where someone gently touched my finger. The pain awakened me suddenly and I cried out. However, after this, my wound felt a lot more comfortable. Master had set my fractured bones!

On the third and fourth day, while performing the second set of exercises and holding the wheel in front of my head, I felt the rapid rotation of a Falun around my injured finger. On the seventh day, I had a dream in which Master grasped my toilet paper bandage, which by then had solidified with my blood into a shell around my injured finger, and gently rotated it left and right. After my hardened bandage separated from my fingers, Master rotated it a bit more briskly before letting the hard shell settle loosely in place around my fingers. At the same time, Master clearly told me, “It’s alright. You can rest assured.” I woke up in tears, saddened for creating trouble for Master while knowing with certainty that Master had healed my broken finger. 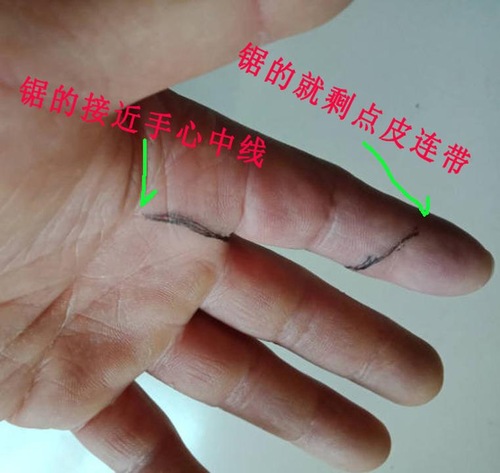 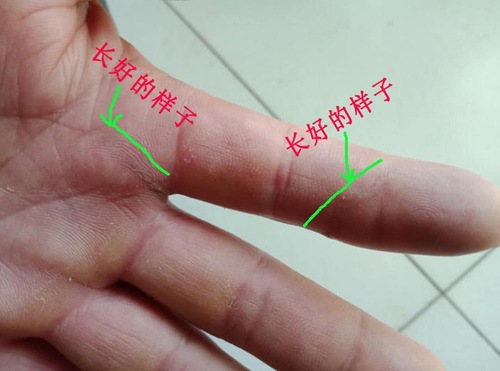 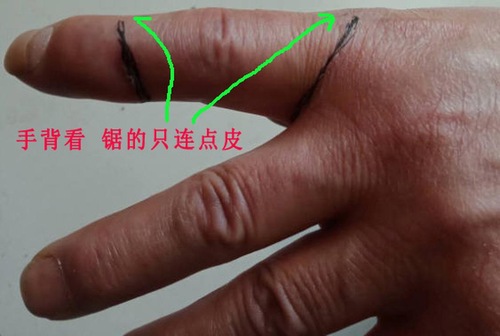 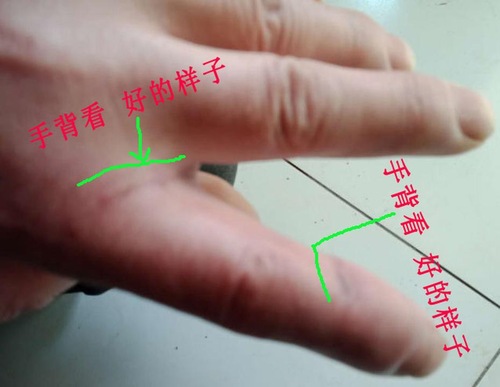 These pictures were taken after my hand was healed. The lines drawn in ink illustrate the position of the wounds inflicted by the chainsaw.

I visited a friend’s home a month after injuring my finger and found him in the midst of helping his neighbor weld a sheep pen. Because the weather had turned chilly, out of fear that my healing injury would worsen in the freezing cold, my friend and his neighbor refused to let me help. I told them, “There is nothing to fear. I am a Dafa practitioner under Master’s protection.” I worked alongside them till dusk, and suffered no problems with my wound. Before I left, my friend’s neighbor pointed at my injured finger and said, “What is the truth? This is the truth. Your Master is simply amazing! Falun Dafa is good!” I was delighted that he now believed the truth of Falun Dafa.

My neighbor had previously severed his finger, which was reattached at the hospital. Severe pain from the wound had left him pale and close to shock. Although four years have passed, my neighbor remains unable to work whenever the weather turns cold due to pain. Compared to his surrounding flesh, his reattached finger remains a brighter shade of red and moreover cannot be bent at will.

Within days of my accident, my neighbor naturally insisted several times on taking me to the hospital for treatment. “I heard that someone else died from tetanus! If you have no money, I can help you pay for treatment.” I declined his offer and jokingly told him, “Don't underestimate this handmade toilet paper bandage. When it’s time, the bandage will come off and reveal my completely healed finger.” At the end of the second month, my words proved to be true. The bloodied toilet paper bandage fell off revealing my finger, fully healed except for some very light scars. A good or bad outcome really originates from a practitioner’s thoughts!

I recovered from my injuries around the New Year holiday, just in time to show my close friends and relatives the magic of Dafa. Everyone expressed amazement and support for Falun Dafa.

Over the course of this tribulation, I discovered a lot of personal cultivation deficiencies. I did not cultivate diligently and did not get rid of my many human attachments. Over time, the accumulated karma resulted in this tribulation. Fortunately, Dafa is already deeply rooted in my life. Master had arranged my destiny as a Dafa cultivator and laid down my cultivation path. Every bad encounter is an opportunity to improve in cultivation. Besides underscoring the importance of diligence in the practice of Falun Dafa, this incident also boosted my confidence in cultivation.

“Scotland: Raising Awareness about Falun Dafa at the Meadows Festival in Edinburgh”