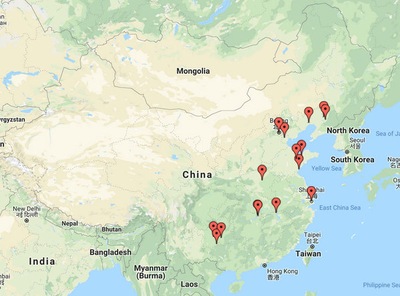 Ms. Wang Shumin from Ninghe District was arrested on May 24, 2019. She was detained at Ninghe Detention Center.

Ms. Yang Liwei and Ms. Zhang Limin were arrested on the afternoon of May 23, 2019. They are being held at Dabailou Detention Center in Caibei Residential District.

Mr. Lu Yongliang was arrested on the afternoon of May 27, 2019 by officers from the Yueyang City Domestic Security Division. His whereabouts are unknown.

Ms. Zhang Wei, 56, Ms. Pang Ping, and Mr. Zhang and his wife were arrested on April 18, 2019, by officers from Guian District Police Station and Domestic Security Division. Their homes were ransacked. They are detained at Anshun No. 2 Detention Center.

Ms. Gao Yunxiao, 74, from Hutai Town, was tried by the Xinmin City Court on the morning of May 24, 2019. Ms. Gao has suffered from high blood pressure and cerebral infarction. Her son-in-law carried her on his back to court.

Mr. Cai Rundong, 40, lives in Xuchang City. Officers from the Beida Police Station broke into his home on the evening of May 27, 2019, ransacked the place, and took him to the police station for interrogation. He was released the same day.

Four practitioners were arrested at Ms. Chen Houlan's home on the afternoon of May 27, 2019, by officers from the Dongjiao Police Department in Xunyang District. The officers ransacked practitioners' homes and confiscated their Falun Gong books and materials, as well as other personal items. Ms. Chen and Ms. Yin Huazhi were detained, while the other two were released.

8. [Shanghai] Update on Ms. Zhou Qian and Three Other Practitioners

Ms. Zhou Qian was sentenced to 18 months in prison by the Fengxian Court on the morning of May 22, 2019.

Luodian County practitioners, Ms. Cui Hong and Ms. Xu Fang, were arrested on March 30, 2018. The Duyun City Court recently sentenced them to two years and to 18 months in prison, respectively.

Ms. Ren Zhijuan, from Xinzhuangzi Village, Qishan Town, Ju County, distributed Falun Gong fliers in Gaoqiao Town, Yishui County on the morning of April 27, 2019. Someone reported her. She was arrested by officers from Gaoqiao Police Station and detained for 10 days at Yishui Detention Center.

Ms. Liu Qi, 74, was arrested by officers from Xiangheyuan Police Station in March 2019 for distributing Falun Gong fliers. She was held for several days at Chaoyang Detention Center. It was said that she originally was released on bail, pending trial in a year; then her release status changed to two weeks of administrative detention and probation.

A dozen officers ransacked the home of Ms. Li Nianchun, 77, on the afternoon of May 27, 2019; they confiscated several thousands yuan in cash and other personal items.

Ms. Yuan Yinghua, in her 70s, was arrested by Weifang Domestic Security Division officers in Mid-May 2019 when she was talking to people about the persecution of Falun Gong. She is detained at Weifang Detention Center.

Ms. Bai Shaojie and her sister, Ms. Bai Shaoping, were arrested on the morning of May 24, 2019 when they were talking to people about the persecution of Falun Gong at the Santun Open Market.

Ms. Zhang Yabin was arrested by officers from Songshan Police Department on the morning of May 26, 2019 when she was talking to people about the persecution of Falun Gong. Ms. Zhang is held at the Jinzhou Detention Center.

Ms. Huang Yuqing, 60, from Qiannan Zhou was arrested on November 30, 2018 and held at Duyun Women's Detention Center. She was tried in Duyun City Court on the morning of May 8, 2019.

Ms. Wang Shanhua of Wangjia Village, Jincheng Town was arrested at home by officers from Jincheng Police Department at noon on May 28, 2019. She was released.

“Looking at Attachments from Another Angle”