(Minghui.org) An estimated 10,000 Falun Dafa practitioners from around the world attended this year's international conference held in New York City on May 17, 2019. Mr. Li Hongzhi, the founder of Falun Dafa, spoke at the conference for nearly two hours. Twelve practitioners, both Chinese and Westerners, talked about their cultivation experiences.

Many attendees said they were moved and encouraged by Master Li's lecture. They also found areas for improvement and were inspired by the speakers' experiences on following the principles of Truthfulness-Compassion-Forbearance in different environments, handling personal relationships, overcoming tribulations and telling others the facts about Falun Dafa. 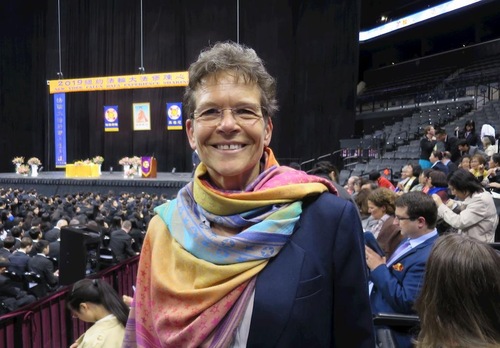 Ulrike Gortner from Germany said she was deeply moved after seeing Master Li for the first time.

Ulrike Gortner has practiced Dafa for four years. She is a physical education teacher in a secondary school in Germany. This is the first time she has attended an experience sharing conference in New York. She said, “It was very moving for me when Master walked in. I was moved to tears. When Master stepped on the stage, the whole place was instantly filled with energy.”

Ulrike said that after listening to Master's lecture, she realized how important it is to do the three things well and keep reading the Fa. Her doctor could not treat her shoulder injury and suggested she try practicing Falun Dafa. After she read the first lecture of the main book, Zhuan Falun, she decided this was something she wanted to practice and began attending a local study group every weekend. She also tries to tell people she meets in her daily life about the persecution in China.

Ulrike wants to tell people from mainland China, “I'm so glad I got to know Falun Dafa, an ancient tradition from China. It is a cultivation method that benefits mind and body and gives you infinite energy.”

She added, “After I became a practitioner, I discover new things every day. I use the teachings of Dafa to guide me in improving my life. I hope that all Chinese people can know how amazing Falun Dafa is.”

Austrian Practitioner: Tolerance Can Change Everything 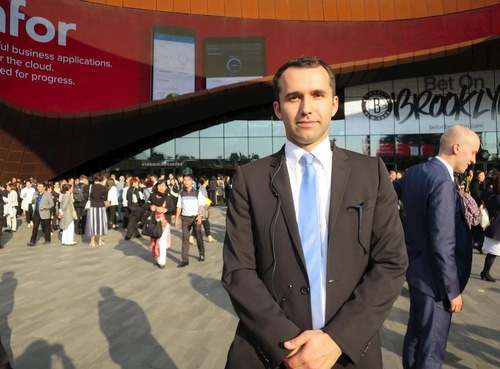 Roberto Mendoza from Austria said he feels inspired after listening to other practitioners' cultivation experiences.

Roberto Mendoza attends the U.S experience sharing conference every year. He said, “It is an encouragement and a reminder of what it means to practice cultivation, what a serious matter it is. Although the content of Master's lecture is different every year, he always mentions the same principles of the Fa, constantly telling us to be diligent and not slack off in our practice.”

“I'm inspired by all the stories shared by the speakers, especially the last one. As an engineer who switched to selling advertising, he put in a lot of effort into the project, working an average of 17 hours a day. He was able to do it because he put his whole heart into Fa-rectification. His experience gave me a lot of encouragement.”

Roberto lives in northern Austria and has been practicing Dafa for 11 years. He found the book Zhuan Falun in his mother's room one day and started to read it. After he read the first page, he knew it was what he had been searching for. He asked his mother where she got the book, and she told him she had bought it at a health expo two years before. She kept the book on the shelf and had not read it. Roberto had a strong feeling that the book was waiting for him.

Roberto said that he's experienced many positive changes after he began practicing. He used to think life was unfair and frequently became upset with his father. After he began practicing Dafa, he stopped complaining. Now if something unfair happens, he tries not to let it get to him. Roberto works in his family's business, and his relatives are his co-workers. After they observed the changes in Roberto, they also became interested in practicing Falun Dafa.

He said that he often sees Falun and feels that Master is always by his side. Whenever others criticize him, Master pats him on the shoulder, reminding him to calm down and not argue back. When he first started cultivation, he was often guided by Master in his dreams.

Roberto participates in several truth-clarification projects and attends the group Fa-study and exercises every week. He goes to the monthly reading and sharing meeting of all Austrian practitioners and participates in large-scale events.

He said he has benefited tremendously from practicing Dafa and wants to tell mainland Chinese not to be misled by the Chinese communist regime's propaganda.

Practitioner from Guatemala: Time is Pressing

Eliseo Dardon was born in Guatemala and now lives in New York. He has been telling people about Falun Dafa in his native country. In the past few years, he has given out around 20,000 brochures about the practice.

Dardon left Guatemala when he was 16. He had been looking for answers about the meaning of life and tried several schools of cultivation. In 1997, he lost his career, and his life was turned upside down. In desperation, he asked the gods for help.

One Saturday in 2009, he saw a group of people practicing Falun Dafa in Queens, New York. His first reaction was, “This is what I want to do.” He recalled walking up to them and saying that he wanted to learn Falun Dafa because it is good.

After several twists and turns, he finally obtained a copy of Zhuan Falun from the “Global Center for Quitting the CCP” in Flushing, New York. The first time he read the book, he felt as if the book was speaking to him.

When asked about his thoughts on the New York conference, his reflected deeply, “Master emphasized the importance of cultivation and encouraged us to look within. He kept reminding us to do the three things well.”

Dardon said the longer he practices Dafa, the more he realizes he does not know. “I have many questions, and Master answered all of them. One of my questions was about the time span for Fa-rectification. Master talked about the principles of the cosmos’s formation, stasis, degeneration, and destruction. I enlightened that Master is reminding us that time is pressing.”