The Wenwu Temple at Sun Moon Lake was rebuilt in 1969 in the palace style of northern China. It is a large and imposing structure, from where people can see the entire Sun Moon Lake. 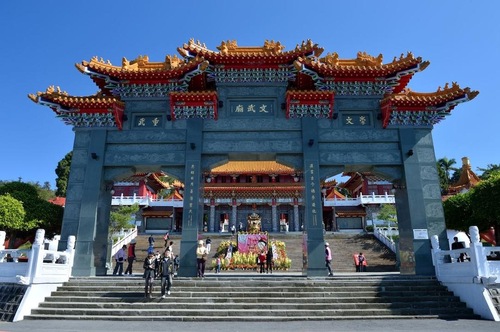 Wenwu Temple at on the bank of Sun Moon Lake

When mainland China began allowing Chinese citizens to visit Taiwan in 2008, Sun Moon Lake and its temple became a must-see point of interest for Chinese tourists.

Falun Gong practitioners in Taiwan clarify the facts about the persecution of Falun Gong to Chinese visitors and others year-round at this tourist site.

Outside the temple gate is a large sightseeing platform where tourists can take photos. This is also where Falun Gong practitioners set up display boards, distribute brochures, and demonstrate the five sets of exercises of this cultivation practice.

The display boards show the merits of Falun Gong (also called Falun Dafa) and give. information about the brutal persecution of Falun Gong in China. There is also a place where visitors can sign a petition to help stop the persecution.

Some tourists have expressed their support and respect for the practitioners’ efforts, some have signed the petition, some have learned the exercises, and some Chinese tourists have quit the Chinese Communist Party (CCP) and its youth organizations. 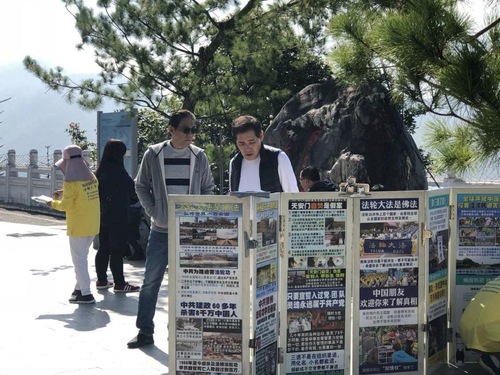 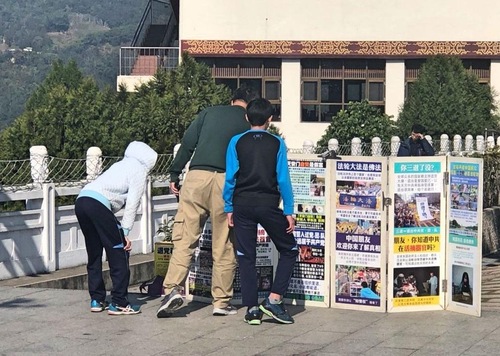 Chinese tourists read the information on the display boards. 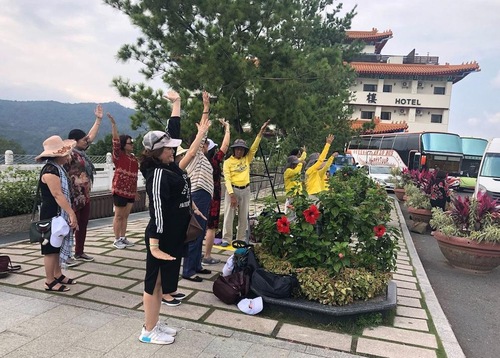 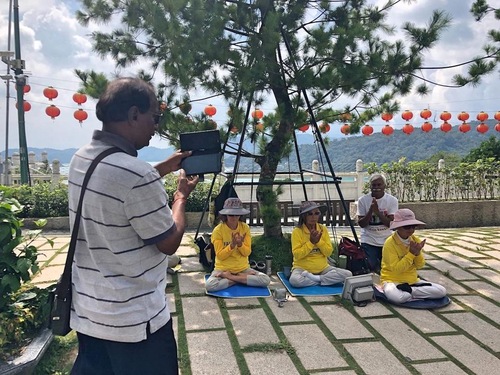 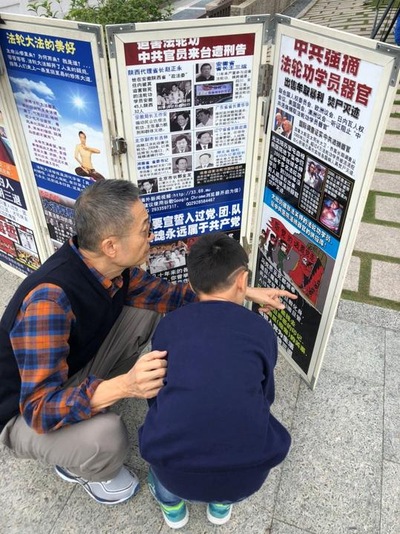 A tourist explains details about the persecution to his child.

Practitioner Jun-hsian has been a great help to tourists for nearly a decade. He said that local residents, police, temple administration personnel, tour guides, and bus drivers now understand the need for the practitioners’ presence, and they often provide support and help the practitioners in their truth-clarification efforts. When a bus arrives, the guide frequently brings the group of tourists to the display area and introduces Falun Gong.

Jun-hsian was interested in cultivation since he was very young. He has benefited from Falun Gong, both physically and mentally, since he started practicing. He says that he now treats things differently than in the past, as he works on issues and solves problems. He said his mind has risen to a higher realm. Witnessing his changes, his wife also started practicing Falun Dafa.

It has been eight years since Jun-hsian began clarifying the facts about Falun Dafa to tourists. At first, he felt physically uncomfortable, due to the hot temperatures.

His heart lightened when he saw an entire group of tourists gather around a speaker listening to stories about Falun Gong. The Chinese tourists' thirst for hearing the truth encouraged him to come back year after year.

Chinese Tourist: I Support You!

He shared the story of a recent encounter with a man from Beijing. When he talked about the vicious deeds committed by the CCP, the man challenged him, “Explain about the Party not doing anything good”

Jun-hsian explained that the CCP does everything for the Party's interests but not for the people. He talked about the Party's endless campaigns that killed millions of Chinese people, including its own members. The CCP now disguises its intentions under the name of Confucius to indoctrinate people with its ideology. He talked about the countless incidents that have harmed people, including the poisoned baby formula, poisonous vaccines, and restaurants recycling drainage oil to cook food. In short, the Party is interested only in its survival, rather than what happens to the Chinese people.

The man thanked him and said, “I support you. You have helped me understand everything by what you said. I will tell my friends and relatives, too.”

Tourist from Beijing: You are Really Amazing!

One Chinese man, who was angered after reading the display boards about the tyranny perpetrated by the CCP, asked Jun-hsian, “Do you mean all Communist Party members are bad people?”

Jun-hsian replied, “We come here for good people like you. There are many good people in the Party. After you learn the truth, you will not blindly follow orders and do bad things. Bad people will receive retribution. People who have joined the Party should quit and sever the relationship to avoid being implicated when the Party loses power.”

The tourist, who was from Beijing, said he believed that. He said, “You are really amazing!”

Practitioner Jiong-fa also drives three hours a day to come to Sun Moon Lake. He wanted to speak up for Falun Gong and help the Chinese tourists understand the facts and no longer buy into the Party propaganda.

He said that practicing Falun Dafa has helped him become more considerate. He often argued with his wife in the past, but he now understands her difficulties. So he has changed and now helps with the household chores. His family has become harmonious and supports his going to Sun Moon Lake.

The practitioners bring brochures in many languages when they go to this tourist site. One day, a man from Vietnam didn't enter the Wenwu Temple but instead read the display boards.

When Jiong-fa gave him a brochure, he said, “Falun Gong is truly good.” He said he had studied in Beijing and had visited Taiwan many times. “China is exactly what you described here. A communist regime that controls the minds of people, suppresses people, and Falun Gong is one of their targets (being persecuted).”

Last month, as a man from Inner Mongolia was reading the display boards he commented, “What is said on the display boards is correct. Chinese officials are very corrupt. Chinese people despise them. But no matter who accepts a Party position, as long as they are a communist, they won't have a good life.”

Tourist from Hong Kong: Falun Gong is the Most Persevering Group of People

Practitioner Bi-yao has come to Sun Moon Lake regularly in recent years. A middle-aged man once approached her and said, “I am from Hong Kong. I think you are the most persevering group of people I have ever seen.”

A few days ago, a Chinese tourist took a brochure, walked up to her, and said, “Mao Zedong committed a lot of bad deeds.” Bi-yao answered, “The Chinese Party has also committed many bad deeds. It won’t last.” The man agreed and said, “You (practitioners) deserve credit for that.” 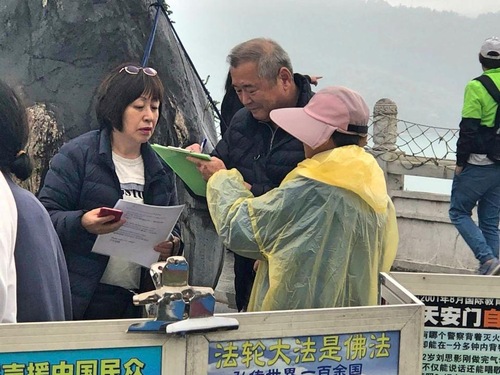 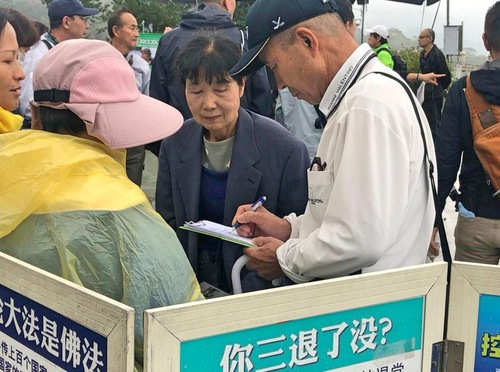 A practitioner (in yellow raincoat) collects signatures on a petition to stop the persecution of Falun Gong.

Ms. Yu, an elderly practitioner, collects signatures on a petition calling for an end to the persecution of Falun Gong. She has collected more than 2,000 names thus far.