(Minghui.org) The whereabouts of Falun Gong practitioner Ms. Zhao Yuhong from Zhaoyuan City are unknown, She was most recently arrested for practicing Falun Gong, a spiritual practice that has been persecuted by the Chinese communist regime since 1999, in early October 2018.

When Ms. Zhao's family went to the detention center to check on her after the 2019 Chinese New Year, they were told that the authorities had transferred her but they were not told where. Her current whereabouts are unknown.

Ms. Zhao, a former cadre at the Zhaoyuan Department Store, was arrested at home in early October 2018 and taken to Yantai Detention Center. Ever since the persecution of Falun Gong began in 1999, she has been repeatedly detained. Ms. Zhao had been living alone after her parents died due to the constant police harassment.

History of Arrests and Detentions

Ms. Zhao suffered unimaginable torture each time she was arrested. Others who were released from the detention center said that Ms. Zhao had become disoriented as a result of the torture.

Ms. Zhao and another practitioner were arrested on December 31, 1999, and taken to the Mengzhi Police Station, where Ms. Zhao was handcuffed to a pipe for 24 hours and deprived of food and the use of the restroom. Cold and hungry, she fainted.

When officer Yu Wendong noticed her condition, he called in four other officers and ordered them to hit her with sticks and later with their hands and feet. Yu used electric batons to shock her because she did not react to the beatings. Next, he kicked and stepped on her head and then opened the window, although it was freezing.Ms. Zhao was later sent to the Shandong First Women's Forced Labor Camp for three years. She was burned with mosquito coils, had her wrist cut, was hung up in the air for a long time, and was deprived of sleep when she refused to work.

She was released after she developed a mental disorder. 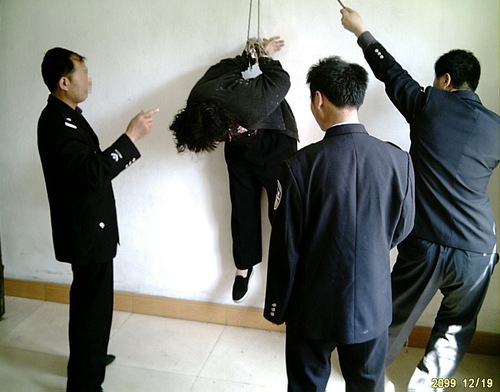 Torture re-enactment: Hung up in the air

2002: Sentenced to Four Years in Prison

Ms. Zhao was arrested by the 610 Office in 2002 for putting up posters that said, “Falun Dafa is good.” Mengzhi Police Station officers handcuffed her to a metal chair and then ran an electric current through it. She felt as if she was being bitten by snakes and her eyeballs were about to pop out. The police also stuffed her nose with burning tobacco and chili until she fainted.

Ms. Zhao was later sentenced to four years in prison.

When Ms. Zhao was imprisoned, her thumbs and index fingers became disabled as a result of torture when she refused to be “transformed” and stop doing the Falun Gong exercises.

A guard ordered about six inmates to beat Ms. Zhao for more than two hours in 2004.

Ms. Zhao's mother visited her on March 8, 2005, and noticed that she could not walk without help. Her mother also noticed that she looked pale and emaciated and had a dull look in her eyes.

When her mother asked what had happened, she was told that the prison staff had escalated the torture of practitioners who refused to give up their belief. When Ms. Zhao continued to do the exercises, the prison doctors injected her with an unknown drug. From then on, she deteriorated rapidly.

When Ms. Zhao's mother went to the prison on March 18, 2006, to take her home when her term was up, she was told that someone else had picked her up. Through her connections, Ms. Zhao's mother learned that her daughter had been taken to the Linglong Brainwashing Center, because she refused to be “transformed.”

In the brainwashing center, Ms. Zhao was locked in a small dark cell without ventilation.

The 610 Office detained her for five months and then was instrumental in her being sent to a forced labor camp for a year and a half, because she refused to be “transformed.” Without informing her family, she was taken to the Zibo Wangcun Forced Labor Camp.

She was transferred from the labor camp to the brainwashing center in September 2006 and detained in a dark cell with another practitioner. They were forbidden to leave the cell at any time and were often deprived of food. When they needed water to drink, they had to fill a plastic bag with water from the toilet.

June 2008: About seven police officers went to Ms. Zhao's mother's home to arrest Ms. Zhao. Although Ms. Zhao was not at home, the police ransacked her mother's home and had her mother's monthly army pension check stopped, cutting off her living allowance. Her mother got sick and passed away on August 3, 2008.

March 31, 2011:Ms. Zhao was reported and arrested for leaving messages about Falun Gong in public. She was taken to a brainwashing center.

May 2013:She was arrested and taken to a brainwashing center for writing messages about Falun Gong in public.

July 12, 2017, Ms. Zhao was arrested and detained for 10 days for clarifying the truth about Falun Gong to a police officer. While in detention, the police made her sit on a metal chair, took her fingerprints, and drew her blood. She had 150 yuan on her, which was confiscated. Ms. Zhao was taken to the hospital to be examined before she was taken to the Zhaoyuan Detention Center.