(Minghui.org) Celebrating the 15th day of the Chinese Lunar New Year with lanterns is an ancient tradition, so much so that the Yuanxiao Festival (the first night with a full moon in the new lunar year) is known worldwide as the Lantern Festival.

The Taiwan Lantern Festival celebrated its 30th anniversary this year and was held in Pingtung in Southern Taiwan for the first time. The festival started on February 19 this year and concluded on March 3.

Falun Dafa practitioners' Fa Boat lantern was displayed in the festival's main area. Visitors could board the boat and go up on deck to get a birds-eye view of the entire festival. Many people commented about feeling a peaceful energy field around the vessel.

The idea of a Fa (or Law or Dharma) boat is rooted in Buddhism and has become part of the popular culture of Taiwan, as roughly one-third of the population is Buddhist. According to Buddhist belief, all people are living in the sea of suffering and a Fa vessel can carry the blessed across that sea to arrive at the destination of relief, nirvana, or the consummation of their cultivation. 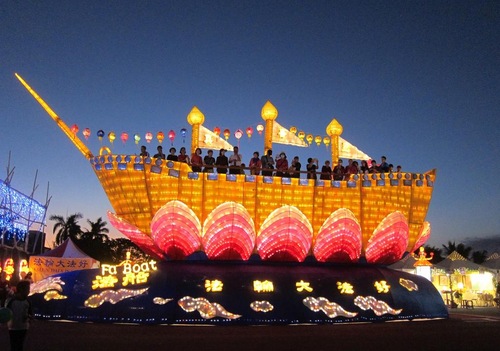 The Falun Dafa Boat lantern at the 2019 Taiwan Lantern Festival.

The Fa Boat lantern was 25 meters long and eight meters wide and sat on a two-meter-tall base representing a cloud. The boat itself was surrounded by nine layers of lotus flower petals.

Mr. Zhuang Yizhong, the chief designer of the Fa vessel, said that the lotus flower petals symbolize different levels of relinquishing human attachments to attain higher cultivation realms. The deck on the 10th level could accommodate up to 50 passengers. Three flags fluttering in the breeze, emblazoned with the Chinese characters for Truthfulness, Compassion, and Forbearance, depict the vessel actively plying the seas.

“It is my first time to see such a spectacular, Great Fa Boat lantern,” he said. “It's a rare opportunity to board a Fa vessel. I feel very blessed.”

He said that building such a lantern must not have been easy. “The teamwork of Falun Dafa practitioners is very touching,” he remarked.

Mr. Zheng, who attended the festival with his wife, said, “It's such a nice view on the deck. My mind and body are so relaxed now.”

Mr. Wu from Kaohsiung came to the festival with his family. “Boarding the Fa vessel gave me such out-of-this-world peace and joy,” he said.

Ms. Xu and her son said they were exhausted from walking around the huge festival grounds. However, she felt a “strong energy as if recharged” when she reached the Falun Dafa area. “My mind was clear once I boarded the Fa vessel. I was calm and peaceful,” she said.

The Falun Dafa-themed lanterns were all made with traditional lantern methods. The chief designer, Mr. Zhuang said that he wanted to help extend the heritage by using traditional methods and at the same time provide an opportunity for visitors to get to know Falun Dafa.

In addition to the Fa Boat lantern, Falun Dafa practitioners also presented a “Chinese Pegasus,” “Falun,” “Falun Dafa Spreads Worldwide,” and other lanterns, totaling 13 in all. 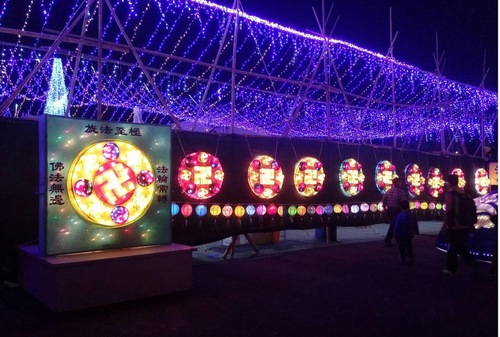 Falun lanterns at the Taiwan Lantern Festival in Pingtung. 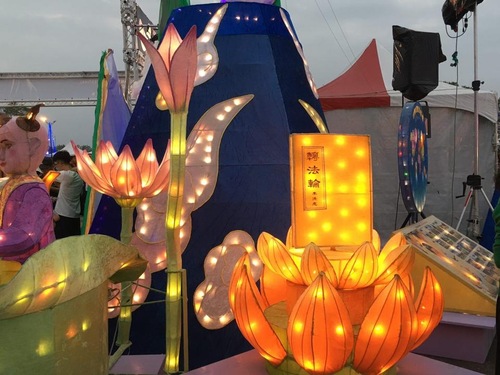 The Zhuan Falun (rotating the Fa wheel) lantern is inspired by Zhuan Falun, the main work of Falun Dafa.

The Fa Boat lantern debuted in 2013 and has toured Taiwan with the annual Lantern Festival, which is frequented by millions of visitors.

This year's festival had three areas and could be viewed from the sea, a first for this event.

“UK: “Letter from Masanjia” 'Will resonate in my heart'”