(Minghui.org) A 22-year-old young man suffered a mental collapse after seven months of torture in a forced labor camp in China. He was incarcerated for practicing Falun Gong, a spiritual discipline being persecuted by the Chinese communist regime. Mr. Wang Jian spent the next 18 years fighting mental instability and declining physical health, while being constantly harassed by the police. 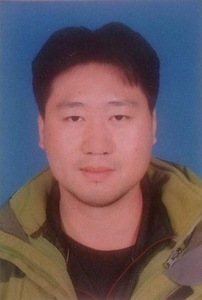 Mr. Wang was an English major at Hebei University of Technology in Tianjin. He was bright, modest and kind. When the Chinese communist regime launched a nationwide campaign against Falun Gong in 1999 – two years after he had taken up the spiritual practice – the young, passionate man went to Beijing to appeal for his faith.

His simple pursuit for spiritual freedom landed him in police custody in October 2000. He was given a one-year term at Shuangkou Forced Labor Camp in Tianjin.

Because he refused to renounce Falun Gong, the guards deprived him of food and forced him to drink the water used to rinse mops. They also forced him to smoke cigarettes, knowing that Falun Gong practitioners do not smoke.

During one round of torture, the guards stuffed Mr. Wang, who was six feet tall, underneath a bed that was just 16 inches high. He was in excruciating pain after he was pulled out. 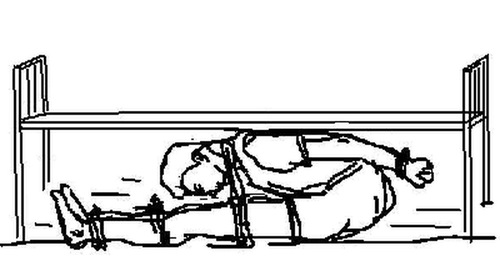 Torture illustration: stuffed under a bed

The guards once shouted at Mr. Wang, “It's fine if you become a criminal; you just can't practice Falun Gong.”

Unable to bear the enormous physical torture, as well as the constant mental pressure and humiliation, Mr. Wang eventually lost his sanity. His family was heartbroken upon seeing him walking out of the labor camp on the day of his release – the individual in front of them was no longer the same optimistic young man they knew before. His once bright and shining eyes were tired and dull.

The police frequently harassed Mr. Wang after he was released. His health continued to decline over the years and he eventually passed away after 18 years of struggle.

At least four other Falun Gong practitioners died as a direct result of detention at Shuangkou Forced Labor Camp, most having been subjected to severe and repeated beatings.

Mr. Lu Dewang, in his 40s, was sent to Shuangkou Forced Labor Camp following his arrest in 1999. The guards shocked him with electric batons on May 1, 2000, after seeing him sitting with his legs crossed. He suffered severe burns. His neck developed infected, open sores. Although his injuries hadn't recovered even several months later, the guards forced him to do hard labor, causing his condition to worsen.

Mr. Lu was released on the verge of death in late 2000. He passed away five or six days later.

Mr. Liu Ping, a young pilot in his 20s, was forced to sort plastic trash at the labor camp. After each work session, sometimes lasting through the night, the guards didn't allow him and other practitioners to wash their hands before eating. He soon developed tuberculosis. The labor camp denied Mr. Liu medical parole and locked him in solitary confinement without a bed or heating. He slept on a wooden board and his health deteriorated quickly.

On the verge of death, Mr. Liu fell into a coma by the winter of 2001. The authorities finally agreed to release him after his wife wrote a statement to renounce Falun Gong for him. It was too late – he passed away in solitary confinement a few days later. His body, which had developed sepsis before his death, was immediately cremated by the guards.

Mr. Chen Baoliang, was beaten to death after he spoke up for another practitioner and attempted to stop criminal inmates from beating him.

Falun Gong practitioner Mr. Liang Feng staged a hunger strike on August 15, 2002 to protest beatings by the inmates. Several inmates dragged Mr. Liang down the stairs by his feet. If it had not been for one person holding his head, he might have been battered to death by the steps.

Mr. Chen stepped up to stop the inmates, but was beaten himself. The inmates taped his mouth, tied up his limbs and carried him to a warehouse. One inmate stomped on him. They then closed the door and beat him for about 40 minutes. Mr. Chen staggered out of the warehouse and fell to the ground after about 20 meters (22 yards). He died a few minutes later. He was 66.

Mr. Tang Jian was given one year of forced labor in 2000. His term was repeatedly extended for not renouncing his faith. The guards frequently shocked him with electric batons and beat him. They released him in July 2002 when he was on the brink of death. Just after he recovered a little, he was arrested again in September and taken back to Shuangkou Forced Labor Camp.

The guards instigated criminal inmates to torture Mr. Tang. They hung him up and then lowered him to a big tank full of water. He choked on the water.

Mr. Tang suffered from a high fever and fell into a coma in May 2004. He had a severe lung infection as well as stomach problems. He died on July 9, 2004, shortly after being released. He was 39.

In addition to the brutal tortures that claimed the lives of the above-mentioned Falun Gong practitioners, several survivors recounted horrific tortures suffered at Shuangkou Forced Labor Camp. Tortures included sleep deprivation, being tied up, stabbing fingers with needles and having feces poured into their mouths.

Mr. Du Jingguang began a 2.5-year labor camp term on May 18, 2001. He was subjected to a variety of tortures, including electric shocks, savage beatings, ten consecutive days of sleep deprivation, and having his palms burned by cigarettes.

A guard once tied Mr. Du to a chair and ordered inmates to pour feces into his mouth and nostrils. Another guard injected hot mustard water into his nostrils.

On another occasion, the guards forced him to sit with his legs crossed. They tied his hands with a rope and then tied the rope to his neck, so that his head almost touched his chest. He was left in this excruciating position for two hours.

Mr. Li Wengang, 69, was shackled to a bed, beaten and shocked with electric batons. His body was covered with injuries. When he still refused to renounce Falun Gong after the beatings, the guards continued to beat him. He had bruises and blood clots in his eyes. The guards then poured cold water over Mr. Li and directed a fan on him. His ankle became infected after being shackled. He was unable to walk, yet was still forced to work more than 10 hours each day.

Mr. Zhu Gang was an engineer for a company that manufactured steel pipes. During his term at the labor camp, the guards slapped his face with a shoe, causing his face to swell terribly. They also shocked him with electric batons, hung him up and inserted burning cigarette butts into his nose. He was emaciated after the tortures. Because he held firm to his faith, the guards sent him to a mental hospital for further persecution.

Mr. Xiao Shuqing, in his 70s, was arrested on January 18, 2001. After he was sent to the labor camp, the guards forced him to work more than 10 hours a day. He contracted scabies and his hands developed infected sores. The sores oozed pus and the bone was exposed. The guards beat Mr. Xiao when he refused to continue working because of the condition of his hands.

Mr. Li Wanbing was given three years of forced labor after he was arrested in 2000. He developed an infected injury on his ankle as a result of long-term forced labor. Inmates used a dirty toothbrush to scrub and further infect his wound. His lower leg became dark and swollen. Even so, he was forced to do hard labor every day. When his condition deteriorated, the guards finally took him to a clinic. After his wound healed, he was forced to stand still for 15 to 16 hours straight, which caused his health to deteriorate again.

“Podcast (Cultivation): “Master Gave Me Wisdom to Help Save People with Compassion””