Alishan is a must-see tourist site for Chinese tourists because of the green scenery, the cloud-ringed mountain peaks, and ancient trees. To enjoy more of the landscape, tourists take the Alishan Forest Railway. 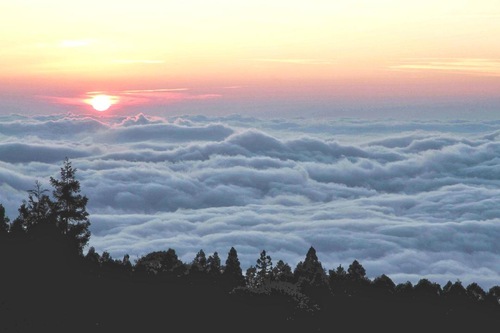 A cloud-ringed mountain peak in Alishan

Falun Gong was introduced from northern Taiwan to Chiayi around 1995. Given the onset of the persecution of Falun Gong in China in 1999, several practitioners chose Alishan as an excellent area to clarify the truth about Falun Gong to tourists.

Given the increase of practitioners in Chiayi, many decided to participate in the truth-clarification activities in Alishan.

A tour guide said to his group of Chinese tourists, “Take a look, everyone. This is a Falun Gong site at the highest altitude in Taiwan,” while pointing at the Falun Gong posters in Alishan. He encouraged them to take a look and get factual information about Falun Gong. 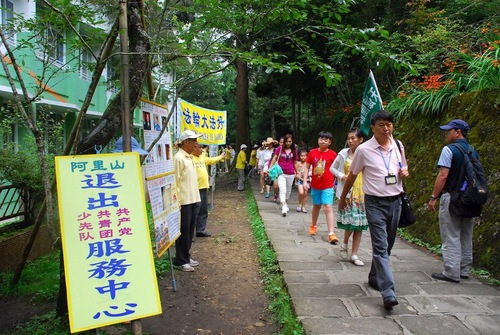 The only path leading to the Alishan Museum in the Alishan Park was opportune for Falun Gong practitioners to put up posters and raise awareness of the persecution.

They also advised the Chinese tourists to quit their memberships in the Chinese Communist Party (CCP) and its youth organizations.

“Welcome to Alishan,” said several practitioners to a group of mainland Chinese tourists, who were walking on the stone path to the museum. “Learn the truth about Falun Gong, and withdraw from the Party to take a stance against its brutal crimes against innocent citizens.” 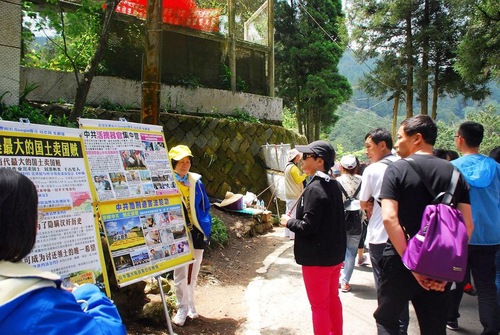 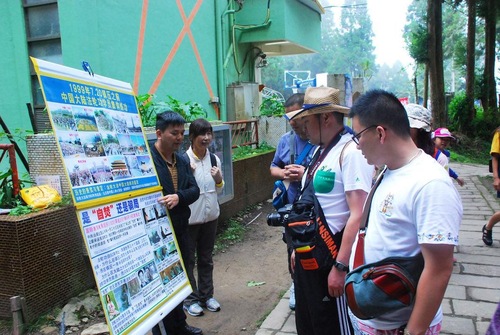 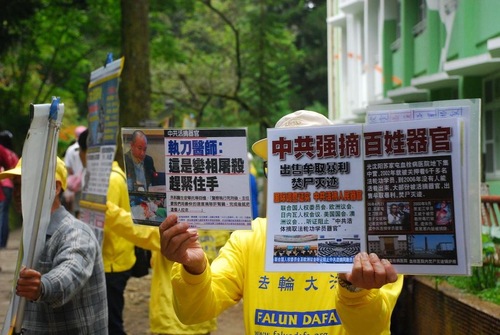 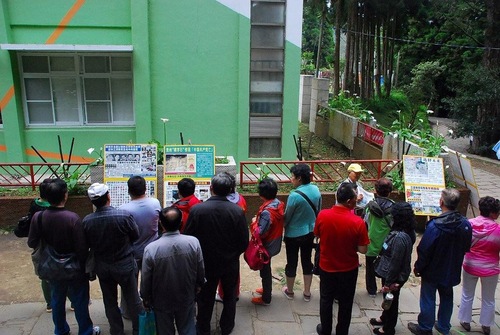 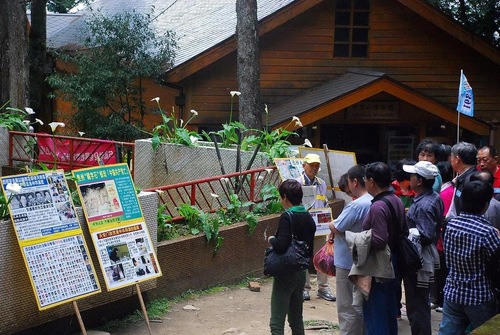 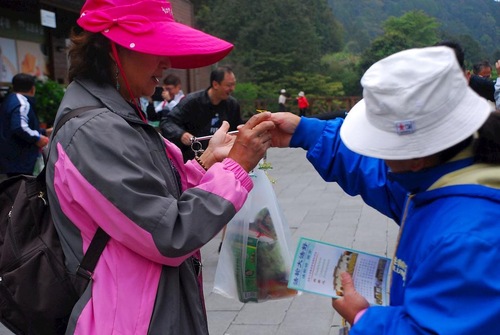 A Falun Gong practitioner hands out informational material, and a paper lotus flower to a tourist.

A mainland tourist stopped in front of the poster displaying information about the CCP-staged Tiananmen self-immolation incident.

A practitioner said, “When the self-immolation occurred, the police immediately extinguished the fire with fire extinguishers.

He continued, “Do you think that the police went on patrol with fire extinguishers? The self-immolation case was staged to deceive the people and denigrate Falun Gong.”

The tourist nodded, handed the practitioner a note, and whispered, “I am a member of the Young Pioneers and the Communist Youth League. Please use this alias to help me quit them.”

Mainland tourists looked at the posters while passing through. A practitioner said, “For over 20 years, Falun Gong spread to over 100 countries worldwide.”

He continued, “The preciousness of Falun Gong is known all over the world. The CCP’s state-sanctioned organ harvesting from living Falun Gong practitioners has been exposed to the international community. It is condemned by the world's people.”

The practitioners in the Chiayi area take turns raising awareness in Alishan every day.

During the weekends, holidays, or during the spring cherry blossoms, more tourists will visit this scenic area.

Practitioners scattered in the park to distribute Falun Gong informational materials and raise awareness of Falun Gong and the persecution. They also did the exercises in the Mulan Garden, which is located in an area surrounded by mountains. The simple exercises and peaceful music drew the attention of many tourists. They paused to watch, and some copied the movements displayed by the practitioners to learn the exercises. 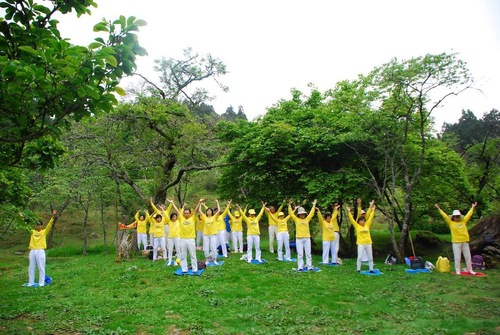