Historic Sun Moon Lake has long been a popular tourist attraction and a must-see destination for Chinese tourists. For over a decade, Falun Gong practitioners have held truth-clarification activities at three scenic sites at Sun Moon Lake: Wenwu Temple, Xuanguang Temple, and Ita Thao. Rain or shine, practitioners from Taichung, Nantou, and Yunlin come every day to raise awareness of the Chinese Communist Party's (CCP) persecution of Falun Gong.

Because practitioners have been coming to these sites for more than ten years, the staff and security guards know about the persecution of Falun Gong in China. The local shop owners are also friendly and support their efforts. 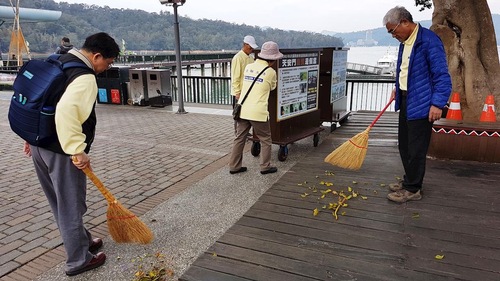 Each day, as soon as they arrive, practitioners clean the area at one of Sun Moon Lake's tourist attractions.

The gateway to Shuishe Mountain, Ita Thao is the main settlement of the aboriginal ethnic Thao people and offers the most spectacular view of the lake. Ita Thao Pier is popular for sightseeing cruises and another tourist destination. 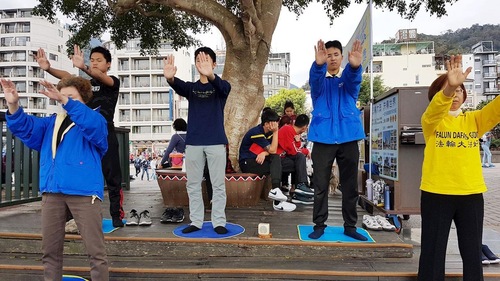 Practitioners demonstrate the exercises while tourists read the informational posters. 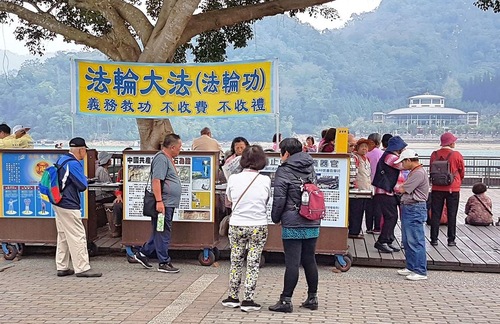 Motivated by the urgency to let Chinese know the truth about the persecution, some practitioners drive three to five hours to Sun Moon Lake from different parts of Taiwan.

Ms. He said, “The CCP is still persecuting Falun Gong and misleading Chinese people. Many people we talk to have misunderstandings about us or even hate us. Whenever I have time I come to Sun Moon Lake to tell people how Falun Gong is being persecuted.”

Hsiu-lan said, “One day while I was doing the exercises, a Chinese tourist asked me for the main book of the teachings, Zhuan Falun, which is not available in China. I happened to have one in simplified Chinese, which I gave him. He was so happy. That day, two Chinese tourists asked if I could help them withdraw from the Young Pioneers one of the CCP youth organizations.”

Mr. Chuang, the director of a foundation, comes to Sun Moon Lake every weekend. When he noticed a young man reading the posters, he began chatting with him and learned he was from Shanghai.

The young man said, “I know about Falun Gong. I practiced it with my parents when I was a child. Before the CCP began persecuting it, many people throughout China practiced the exercises in the parks.”

Ms. Chiu-yue said that she met a tourist from Zhejiang who told her, “I know you Falun Gong are good people. A girl in my neighborhood practiced Falun Gong. She was very kind and good, but the CCP persecuted her to death.”

Ms. Chiu-yue said that some tourists mention the stone in Guizhou Province that is tens of millions of years old. The naturally-formed characters on the stone read: “The Chinese Communist Party is doomed.” 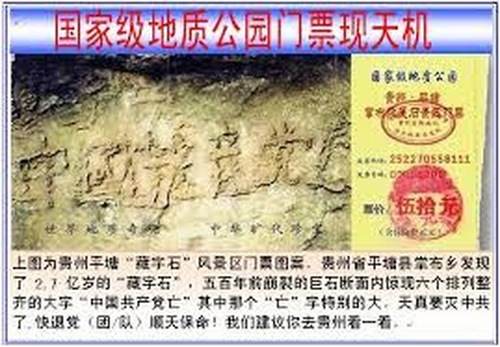 The stone in Guizhou Province. The characters say, “The Chinese Communist Party is doomed.”

One tourist asked Ms. Chiu-yue, “Is it true that you aren't paid to be here? How do you make a living?”

Ms. Chiu-yue explained, “Many of us are retired, so making a living is not an issue. We take turns coming here. Whoever has time comes. Those who have jobs come here on weekends or when they have time.”

She tells tourists, “We treasure these brochures and the materials we give you. Did you know that we use our own money to have them printed? A lot of time and effort went into making them, and the information is invaluable, but we don't force you to take them.”

Mr. Yu is over 80 years old and has been coming to Ita Thao for more than ten years. Despite his age he's able to hold posters and banners for hours and also distributes information about Falun Gong to tourists.

When Ms. Lee noticed several bus drivers waiting for their tour groups, she walked over and explained why it was so urgent that people know about the persecution. One driver who understood brought his tour group to the practitioners. He told them, “Taiwan practices freedom of belief. You can't get this information inside China. Please take the materials and read them.”

A young practitioner was distributing flyers at the pier when he saw a tourist raise his fist and begin shouting. He was worried that the man was angry then realized the tourist was shouting, “Down with the communist party!”

Some tourists stop and tell practitioners, “You work hard. Keep up the good work!” Others ask to learn the exercises. Some ask where they can get the book Zhuan Falun. As soon as some tourists see practitioners, they shout, “Long live Falun Gong!” “Falun Gong is the hope of the Chinese people.”

Ms. Lee is a teacher and comes to Sun Moon Lake as often as she can. She said more and more Chinese people are brave enough to speak out. While several practitioners did the exercises, held banners and distributed flyers at Ita Thao recently, a Chinese tourist called out, “The Chinese people are proud of Falun Gong!”