(Minghui.org) Falun Gong practitioners held activities in downtown Cagliari, Sardinia, Italy on January 13 and 20, 2019. They demonstrated the exercises and informed people about the Chinese Communist Party's (CCP) brutal persecution of the practice that has continued for the past 20 years. 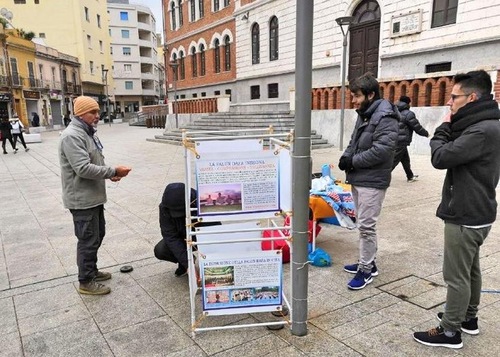 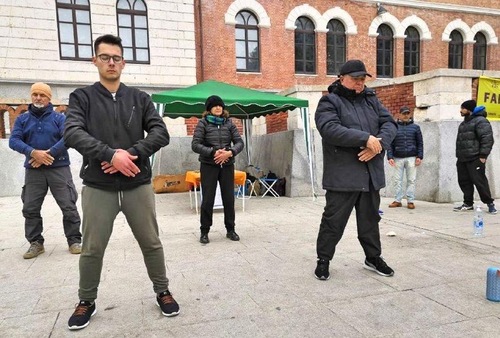 As soon as practitioners set up their display on the first day, passers-by began asking for more information.

One man said that he knew about the CCP's brutality and that it is a tyrannical regime. Several people were shocked to learn the details of the persecution, especially the Party's state-sanctioned organ harvesting from living Falun Gong practitioners.

Many people were indignant and signed the petition condemning the persecution.

A group of Tai Chi enthusiasts asked why Falun Gong is being persecuted. After the practitioners explained that the practice came under attack when the number of followers surpassed the Communist Party, they signed the petition and said that they would visit the Falun Dafa website.

A university professor who teaches pharmacology told the practitioners that she was aware of the persecution in China, because she used to study the effects of various forms of persecution on people's health.

A couple from Olbia City were very interested in spirituality and wanted to know more about Falun Gong. They asked several questions and said they would connect with local practitioners to learn the exercises.

“Using My Tribulations to Identify My Attachments”