(Minghui.org) Today's news from China includes incidents of persecution that took place in 7 cities or counties in 4 provinces, where at least 11 practitioners were recently persecuted for their belief. 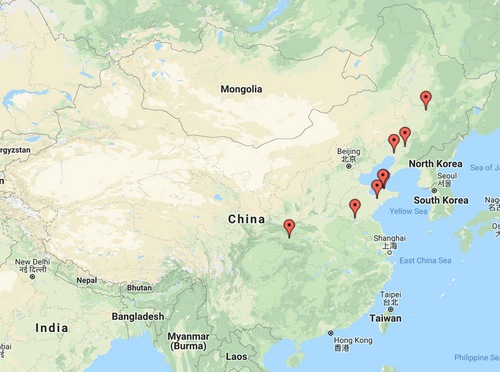 Ms. Ma Hua, in her 60s, was arrested by officers from the Taolaizhao Police Station on January 23, 2019, for distributing couplets which had information about Falun Gong. On January 24, her family learned that she was held at the Shanyou Detention Center in Songyuan City.

Ms. Yang Shuyu was sentenced to a three-year prison term and fined 20,000 yuan by the Penglai City Court on September 25, 2018. She appealed to the Yantai Intermediate Court. Ms. Yang had been held at the Yantai City Detention Center until January 22, 2019, when she was transferred to Jinan Prison.

Ms. Teng Lianxiang was sentenced to a two-year prison term and taken to Dabei Prison in Shenyang City.

Ms. Teng was initially taken to the Panjin City Detention Center. While being detained, she held hunger strikes to protest the persecution. She was subjected to force-feeding and solitary confinement in a small cell.

She was taken to a hospital for a physical examination and then brought back to the detention center. She now has symptoms of hemoptysis (coughing up blood) as a result of being persecuted.

Mr. Xu Hongwei and Mr. Liu Dagong were sentenced to prison on September 25, 2018. They were held at the Penglai City Detention Center.

Ms. Qu Yuanzhi and Ms. Sheng Shuli were arrested and taken to the Zhugou Town Police Station on January 22, 2019, for talking to people about the persecution of Falun Gong. The next day, they were taken to Pudong Detention Center in Jimo City.

Ms. Shang Xiaoyun was sentenced to a three-year prison term but her family was not informed. She is now held at Pingluo Prison.

Mr. Liu Jie and Mr. Wei Yanjing were sentenced to a three-and-a-half-year and nine-month prison term, respectively, on January 23, 2019. Mr. Liu appealed and his lawyer was threatened by judge Shao Zhigang (邵志刚).