(Minghui.org) Falun Gong practitioners in Taipei took part in a five-day intensive group Fa study and sharing from February 5-9. They took care of their families in the morning and then joined the Fa study in the afternoon. 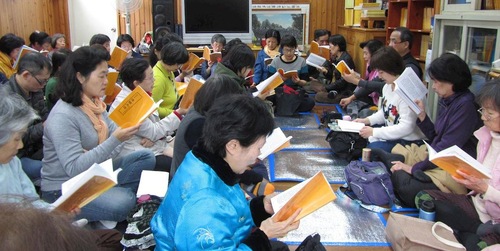 Those who have been practicing Falun Gong for many years said that the event helped them deepen their understanding of the Fa and maintain or restore their determination to cultivate like they did when they'd just begun to practice.

A new practitioner named Liang discovered Falun Gong when he was searching for a cure for his ill father. Although he strongly recommended the practice to his mother and siblings, they didn't listen to him. Liang realized that he was deeply attached to his family emotionally. He realized that he should let go of his attachments and allow them to come to their own conclusions.

Another topic that was discussed was how to maintain determination and passion in cultivation practice. Mr. Wu said that his illnesses were cured within the first three months of taking up cultivation. “I used to drive more than one hour each morning from Keelong to Taipei to join the group exercises when I was a new practitioner. As a veteran practitioner, I have become casual about many things. I need to regain the determination I had when I first started.”

Ms. Lin shared that her goal was to finish all five exercises in one go. She encouraged fellow practitioners to do the exercises outdoors. She noted that doing the exercises as a group is good for promoting Falun Gong to the public, and, it provides great benefits to those who do the exercises.