(Minghui.org) The 2019 Lunar New Year Parade took place in Flushing, New York, on Saturday, February 9, and Falun Gong practitioners once again participated in the event to celebrate with the community.

Tens of thousands lined the streets of Flushing in Queens to watch the procession, and many Chinese complimented the Falun Gong procession, both for its beauty and for the principles of Truthfulness-Compassion-Forbearance that practitioners live by. 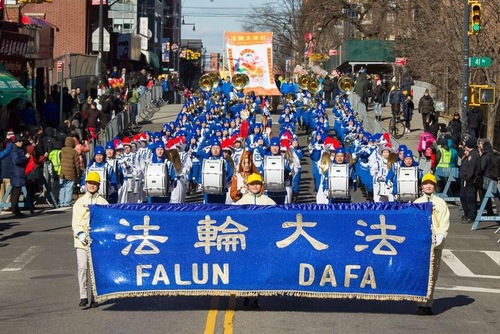 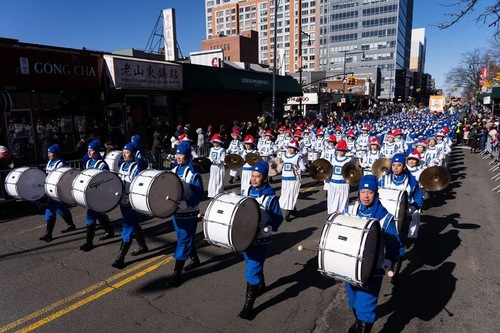 The Tian Guo Marching Band, whose members are all Falun Gong practitioners

Organized by the Greater Flushing Chamber of Commerce, the Lunar New Year Parade attracted around 10,000 parade participants and tens of thousands more spectators, most of whom were Chinese. The NYPD Police Band also participated this year and led the procession. 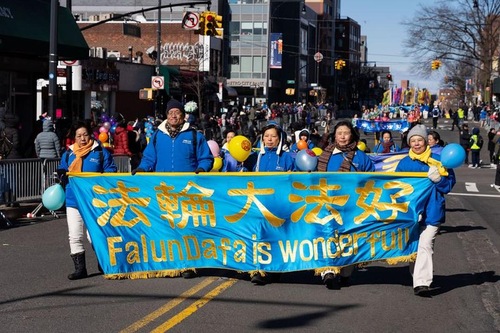 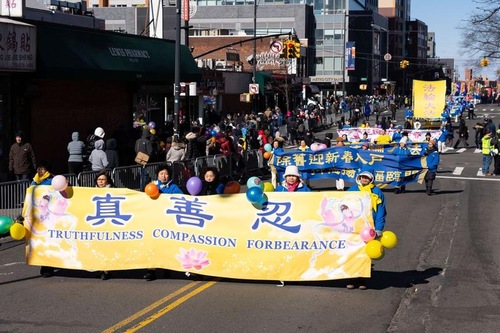 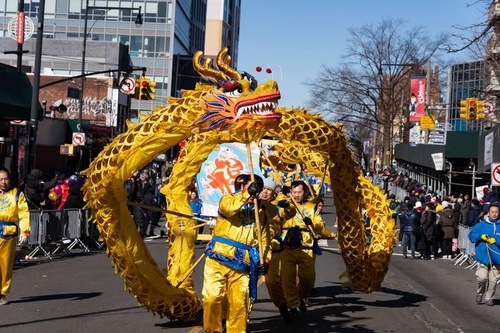 Practitioners do the dragon dance. 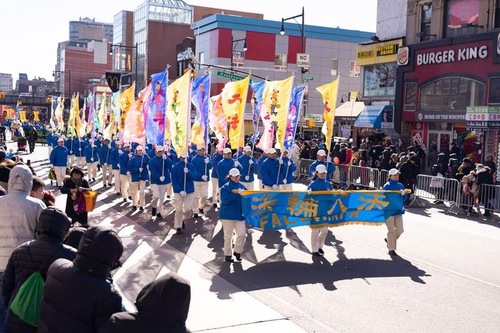 Practitioners' determination to stand by their principles was what impressed Zhang Lin the most, he said. “Despite severe suppression by the communist party, they are able to maintain a positive attitude. I admire their confidence and their efforts--they will inspire people all over the world.”

Dong Yongpo, a democracy advocate who arrived in the United States three years ago, praised practitioners' contribution to the community. “I am not a practitioner, but as a local resident and a spectator, I support freedom of belief, especially because this is such a peaceful belief,” he explained. “From their manner and energy, they display the spirit of people with a true belief.” He said that, although such faith is rarely seen among Chinese, it is critical for a community's prosperity, security, and spiritual health.

Chen Chuangchuang, a human rights advocate, said, “Falun Gong practitioners are nice people, and they are doing their best to help others. Someday more people will recognize how valuable they are to this neighborhood and to our society.”

Liao Dawei, an artist, agreed. “The banners, costumes, and everything is so beautiful and honest. They [practitioners] are instrumental in reviving traditional Chinese culture—we all know this, no matter how the communist party tries to slander them,” he said.

Lawyer Li Ming, a recent immigrant from mainland China, said China's traditional values could be seen in the efforts of Falun Gong practitioners. “They are kind to other people and are very selfless. How they are participating in this event reflects those values,” he said. “Not only that, from their behavior, more people will realize the importance of good moral character. This will, in turn, benefit people's minds and bodies and make our society a better place.”

Mr. Wu, another resident of Flushing, said the principles of Truthfulness-Compassion-Forbearance have a deep impact on society. “They are the essence of the 5,000-year-old Chinese culture,” he said.

Mrs. Lin said she was impressed by the large number of practitioners in the group. “The one we just saw [the Tian Guo Marching Band] was spectacular. It is probably the largest group in the parade today. And they are very precise and well organized,” she commented.

Dong-Joo from South Korea said she agrees with the principles of Truthfulness-Compassion-Forbearance. “I know Falun Gong practitioners have been persecuted by the communist party and I don't understand why,” she said. “But I think the suppression will not last much longer.”

“Hebei Woman Imprisoned for Her Belief, Husband Dies of Grief”