(Minghui.org) A Huichun City, Jilin Province resident was sentenced to one year in prison with two years of probation for her faith in Falun Gong, a spiritual discipline that has been persecuted by the Chinese communist regime since 1999. 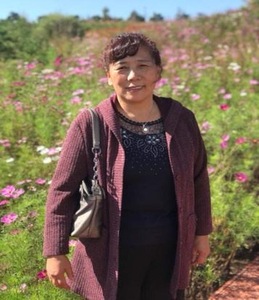 Ms. Zhang Junling, 60, was arrested on February 14, 2019 after the police spotted her putting up posters about Falun Gong and talking to people about it.

The police initially put Ms. Zhang under 15 days of administrative detention and didn't allow her family to visit her or make deposit for her.

When her family returned to the local detention center on the morning of March 1 to take her home, she had already been taken to a hospital for a physical checkup for further detention.

Ms. Zhang was found to have high blood pressure and a heart condition. She also experienced swelling and pain around the area where she had a mastectomy years ago. As she had an amputation of her left calf after a train accident in 1981, the artificial leg she was wearing no longer fit after she lost a significant amount of weight due to mental distress following her arrest.

As Ms. Zhang failed the physical examination, the police brought her back to the police station and attempted to force her to sign a statement to renounce Falun Gong. She refused to comply. After hours of intimidation, the police released her on bail around 3 p.m. on March 1.

The police submitted her case to Huichun City Procuratorate in early June 2019. She appeared in Longjing Court in a wheelchair on September 26.

The judge announced her verdict in less than 30 minutes. She was ordered to serve time outside of the prison.

“Jilin Man Given 3.5 Years for Upholding Faith That Helped Him Quit Drinking”