(Minghui.org) Today's news from China includes incidents of persecution that took place in 16 cities or counties in 9 provinces, where at least 65 practitioners were recently persecuted for their belief. 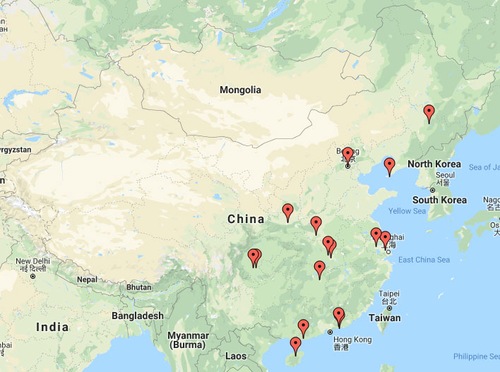 Ms. Wang Qisu, 66, was pushed into a police car by officer Tang Jian and others from the Haozikou Police Station in the Shizhong District on the evening of September 23, 2019.

She was taken to the local police station, where officers took her fingerprints and blood samples.

Both practitioners are still being held in a detention center.

Ms. Yan Ling and her mother from the Muxiyuan area of the Fengtai District were arrested at home by the Chaoyang District police on the evening of October 6, 2019.

Mr. Li Wenyou and his wife from Wangxiang Village, Erdao Township in the Fengman District, were arrested on October 1, 2019, at the Jilin Train Station when they used their ID cards to buy tickets. Mr. Li’s wife managed to escape.

Ms. Hou Liyue was arrested by officers from the Chezhan Police Station at the security checkpoint in the Dalian Train Station on October 5, 2019. An electronic device in her bag set off the alarm when it was scanned. The officers later ransacked her home.

Ms. Hou is being held in the Yaojia Detention Center.

Ms. Zhang Yuhua was reported to the authorities for talking to people about Falun Gong in the Xinbei District. She was arrested by officers from the Xinbei Police Department on August 8, 2019.

Ms. Zhang was taken to the Xilin Detention Center.

Ms. Wu Bilin, 71, was sentenced to a five-year prison term in late April 2019. She appealed to the Wuhan City Intermediate Court, which upheld the original verdict. Ms. Wu was taken to the Prison Admission Section in Baofenglu Women's Prison, and have not allowed her family to visit her.

Mr. Xu Zhangqing, his wife Ms. Tu Ailian, and their son Mr. Xu Gaorui were arrested. The police confiscated their personal belongings and all the cash from their home.

Ms. Zhao Zhenxian, in her 60s, was arrested at the Hainan Airport by the airport police on the afternoon of October 3, 2019, when she was about to fly to Hubei Province. Her whereabouts are unknown.

Ms. Wang Juan and her family of three went on a trip to the Gongtan Ancient Town in Youyang County, Chongqing, on October 1, 2019. She was reported to the authorities for talking to someone about Falun Gong. Ms. Wang and her family were followed and arrested by officers from the Youyang Domestic Security on October 3.

The police seized her car, cell phone, and some cash. During interrogation, the officers threatened the 13-year-old child.

Ms. Wang and her family were taken back to Changsha that evening. Her home was ransacked, and Falun Dafa books and USB flash drives were confiscated.

Ms. Wang is still being held in Youyang.

Ms. Liang Shaolin was arrested in September 2019, when she took a train from Guangdong City back to her hometown in Maoming City. She is being held in the Maoming Detention Center for 15 days.

Ms. Dai Zhenxiu was arrested by officers from the Yunling Police Station on the evening of August 13, 2019. Her home was ransacked, and Falun Dafa books, materials, and a cell phone were confiscated. Ms. Dai was taken to the Haifeng Detention Center for 15 days, and is still being held there.

Ms. Luo Guangyu, 69, from Weiyuan County, was reported to the authorities on September 2, 2019, for talking to people about Falun Gong in Yishui City, Guizhou Province. She was arrested by officers from the Chishui City police, and was detained for 14 days.

Mr. Song Zhi from the Yanliang District was arrested by the Xi’an City police on September 25, 2019. He is being held in the Xi’an Police Department. Two other practitioners Xiaoyu and Laoqi from Hanzhong City were arrested with him.

The Nanyang City Political and Legal Affairs Committee, the Police Department, and 610 Office have worked together in monitoring, tracking, and arresting a large number of practitioners since August 30, 2019.

“Helping Our Friends Save Their Marriage”

“Australia: “I Hope More People Will Know the Truth” – Practitioners Share Their Thoughts after Weekend Events”