(Minghui.org) Falun Dafa practitioners celebrated over 340 million people withdrawing from the Chinese Communist Party (CCP) with a parade along Brooklyn's eighth avenue – one of New York city's three largest Chinese neighborhoods on the afternoon of October 20, 2019. 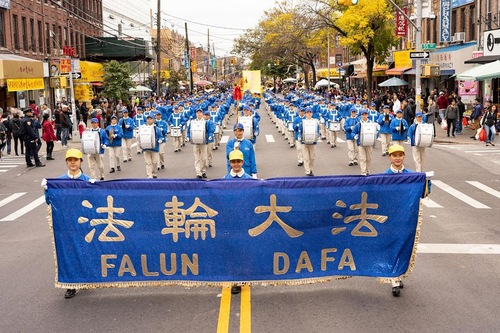 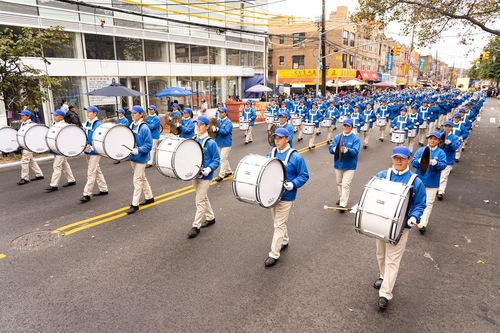 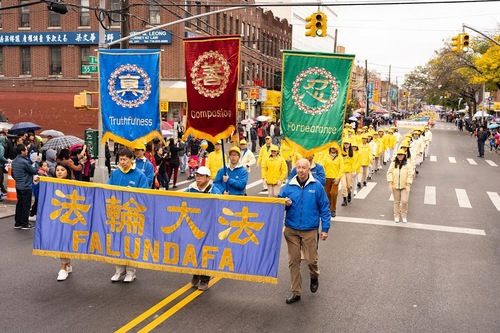 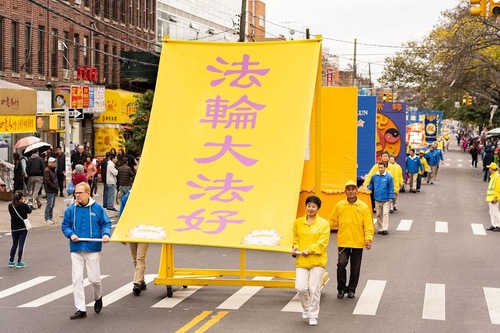 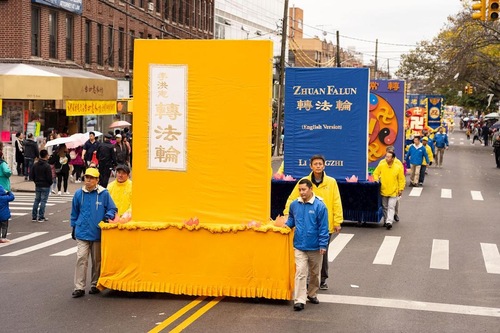 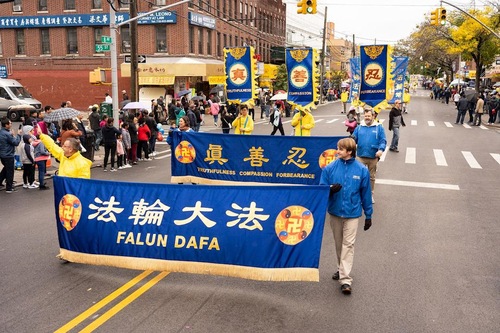 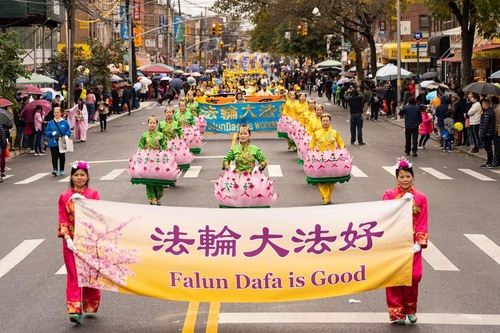 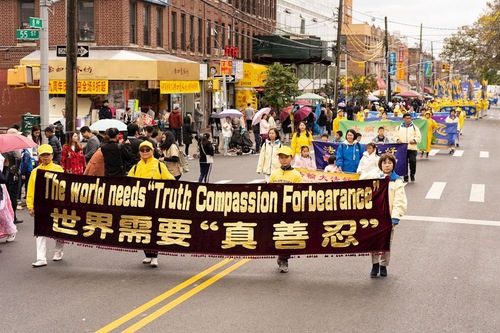 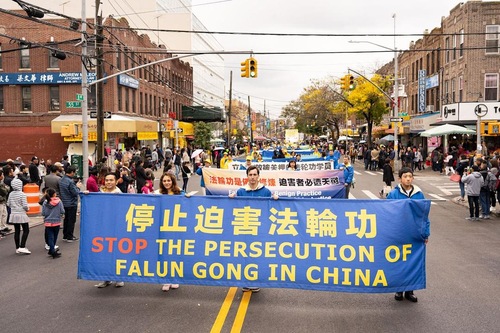 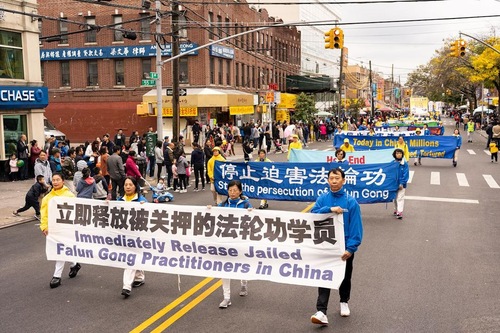 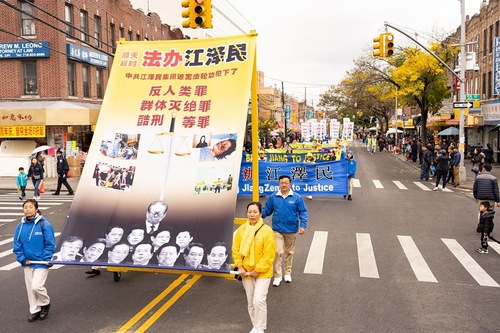 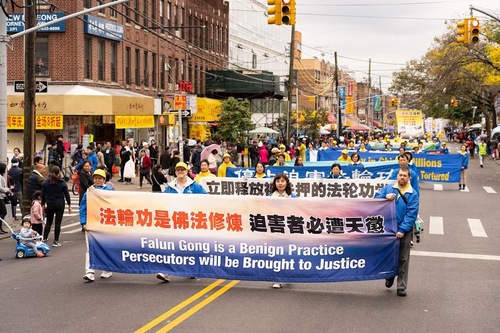 Practitioners held activities parade to show people the benefits of the ancient spiritual practice and raise awareness of the persecution in China.

The grand parade passed through Chinatown's busiest streets - from 68 th street to 42nd street. Hundreds of banners, flags, and huge display boards introduced the practice and exposed the brutal persecution in China to the public.

The parade was colorful and vibrant with uplifting music from drums and trumpets. Despite a light drizzle, crowds lined both sides of the street.

Mr. Niu, a local resident who recently came to the U.S. from China took a photo with the dragon from the dragon dance performance. He said more and more people in China have a positive opinion of Falun Dafa despite the government's attempts to vilify the practice. He has friends back in China who have secretly started practicing it at home despite the persecution because they know it's so good.

Ms. Dou Jinmei originally from Heilongjiang Province, China was a participant in the parade. She shared an unforgettable experience. She began to practice Falun Dafa in 1995. Three months later, she had a serious car accident on a trip to Dalian city. She was rushed to the hospital for emergency treatment. She was unconscious for three days. When she regained consciousness, a doctor told her she would be paralyzed for the rest of her life. Ms. Dou recalled, “I was devastated. Then I remembered I was a practitioner and I asked Master for help. The next day she was able to walk. The doctors were astonished.” She recovered from her injuries without any surgery. 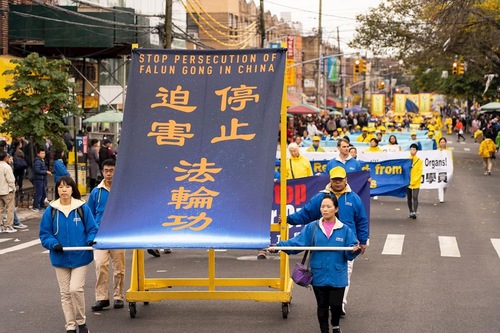 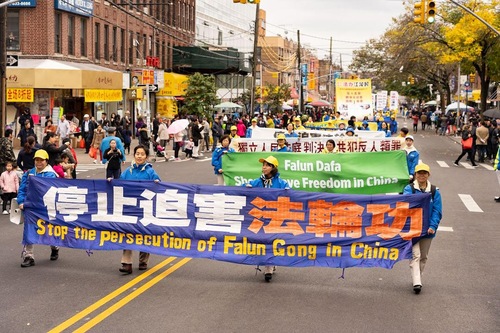 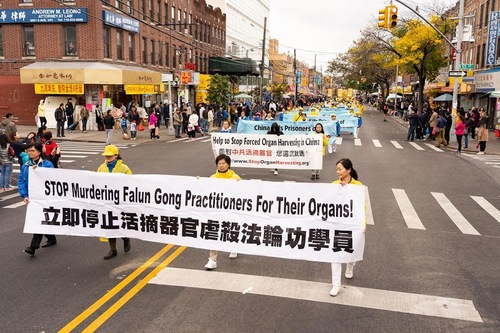 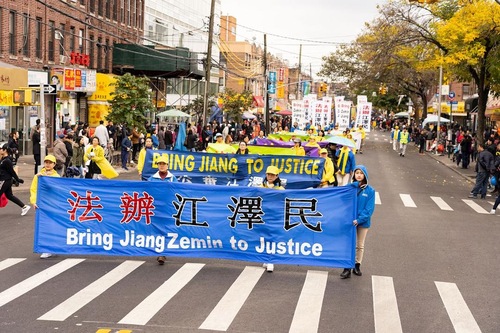 A section of the parade was devoted to exposing China's forced organ harvesting crimes, in particular the removal of detained Falun Gong practitioners' organs without consent for sale to transplant patients. They called for an end to these atrocities as well as the release of all imprisoned practitioners.

Lu Caiyun from Qinhuangdao City in Hebei Province held a banner with the words “Stop persecuting Wang Haiyan.” Wang Haiyan is Ms. Lu's sister-in-law. She was arrested and sentenced to four and a half years in prison on October 20, 2018. She was sent to Shijiazhuang City Women's Prison in Hebei Province in July 2019. Ms. Wang was tortured in prison. When her family visited her in prison, she could not recognize them or speak. Ms. Lu called on the international community to help release Wang Haiyan.

A large sign with the words “Bring Jiang Zemin to Justice” was especially eye catching. According to the Minghui website, to date 4,363 Falun Gong practitioners are confirmed tortured to death and at least 200,000 practitioners and family members who have been victimized by the persecution have filed lawsuits against former Party leader Jiang Zemin for crimes against humanity. An estimated 320,000 people in 35 countries have submitted criminal complaints to China's Supreme Court and Supreme Procuratorate and to bring Jiang Zemin to justice.

500 Chinese Withdraw from the CCP 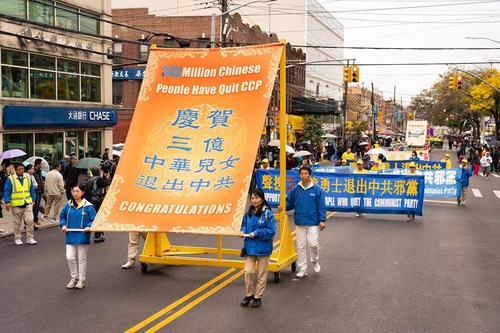 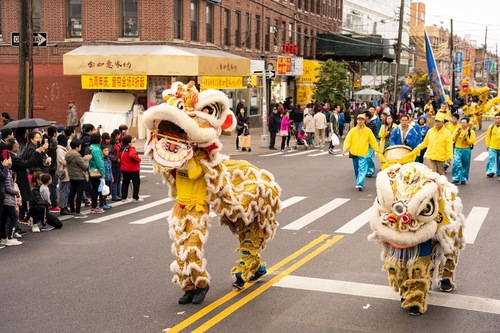 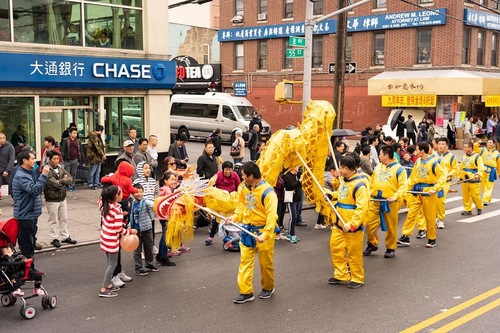 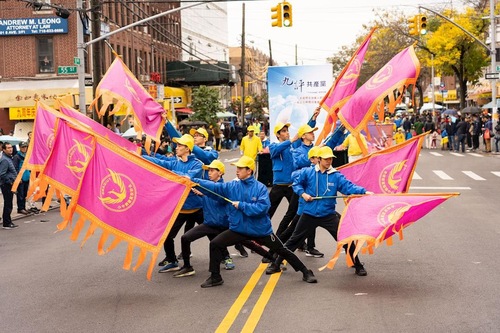 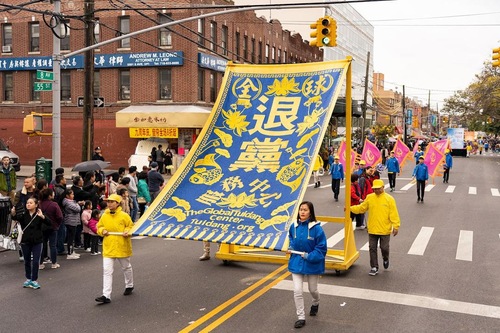 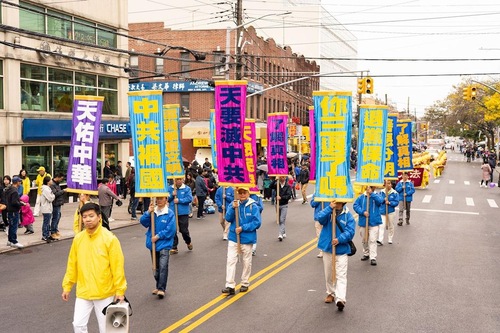 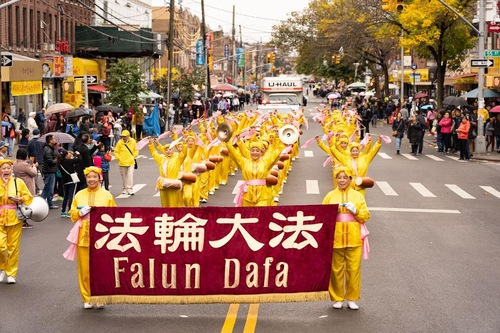 Practitioners celebrated over 340 million people withdrawing from the CCP and its youth organizations.

Due to the persistent efforts of volunteers who tell people the true nature of the Chinese Communist Party, over 340 million Chinese citizens have chosen to withdraw from it and its youth organizations. Since the beginning of 2005, a “quit the CCP” booth was set up on 61 st St, Eighth Avenue. For 14 years, volunteers at the booth have persuaded many Chinese people to renounce the Communist regime.

During the parade, volunteers from the Quit the CCP Center talked to people about the crimes against humanity committed by the regime and encouraged them to withdraw from the Party. Roughly five hundred Chinese citizens agreed to quit the CCP and its affiliated organizations. The volunteers said that more people withdrew this year compared to prior years. Many people took fliers while watching the parade.

“Disintegrate the Persecution Without Hesitation”